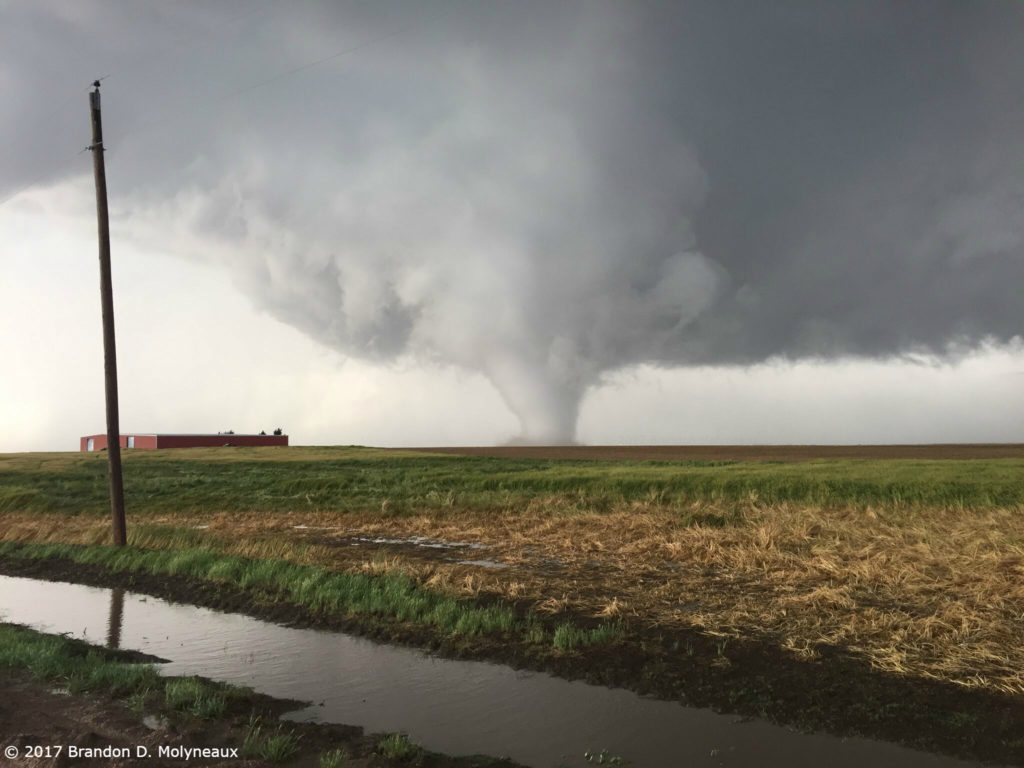 Tornado: “A rotating column of air, in contact with the surface, pendant from a cumuliform cloud, and often visible as a funnel cloud and/or circulating debris/dust at the ground.”

Tornado Talk is a dynamic, information packed website devoted to tornado history! The site contains over 400 event summaries. These write-ups go in depth on the details about a specific tornado event and the communities involved. We also have articles from our guest writers on a myriad of tornado topics!  Get Hooked on Tornado History with Tornado Talk!

Jennifer is a Midwest girl, originally from Beech Grove, Indiana.  Her interest in weather came in middle school.  She was living in Central Florida at the time and became fascinated with hurricanes and tracked every storm on the tracking charts you get at the grocery store.  Jennifer graduated in 1995 with a B.S. in Meteorology from Penn State University.  She has been working as a radio broadcast meteorologist for 20 years.  She began her career at the Weather Channel and currently works for The Storm Report Radio Network.  Jennifer provides daily forecasts for 50+ cities across the country.  She also provides severe weather coverage for a dozen stations including WIBW-Topeka, KMBZ-Kansas City and KNSS-Wichita.  Jen Co-Founded Tornado Talk in 2016.  It began as a podcast.  After 36 episodes, the podcast ended but Jen continued the brand as an in depth website dedicated to tornado history.  Her hobbies include:  Volunteering with the special needs community and competitive tennis.

Brandon Molyneaux is a student at Auburn University pursuing his second degree in Software Engineering. He graduated from Millersville University with a Bachelors in Meteorology in 2017. He hopes to combine the two degrees together to help advance the field of meteorology through research.

Our guest writers provide content for our “Funnel Feature” section.  The Funnel Feature is a special blog that covers a wide array of topics:  From tornado outbreaks to storm chasing, safety precautions to meteorological analysis.  If you are interested in blogging for us, we would love to hear from you!  Send us your pitch today!

A native Texan, Lon grew up in Belton, some 40 miles south of Waco and 60 miles north of Austin, and vividly recalls the day of the 1953 tornado at Waco, a disaster in which 114 people died and almost 600 people were injured. Inspired by a fourth grade teacher who taught world geography with a weather perspective, he was drawn into a lifetime pursuit of meteorology, but not without forays into other fields. Lon earned a law degree from S.M.U. in Dallas, worked as a police legal advisor for two years, then was a felony criminal prosecutor for 24 years in Bell County. More or less simultaneously, he was also a volunteer firefighter in Belton, and was assistant fire chief for 20 years. Lon never abandoned meteorology as an intense interest, and in 1997, he was actively tracking the severe storms that moved from near Waco to west of Austin, producing numerous tornadoes. He was in Jarrell when the F-5 tornado killed 27 people there. Several months later, he accepted a part-time position as weekend meteorologist at KWTX-TV (Waco), and after 3 1/2 years, he retired from prosecution and worked fulltime at KWTX until he retired in 2011. He earned a Certificate in Broadcast Meteorologist from Mississippi State University, the N.W.A.. (Television) Certificate of Approval, and the A.M.S. Certified Broadcast Meteorologist. He has presented at many weather conferences on severe storms and tornadoes, and in 2004, published a peer-reviewed article in the A.M.S. journal Weather and Forecasting.

Dan was raised on a farm, east of El Dorado, Kansas.  Throughout his childhood he built his own radio and weather station in his bedroom and began practicing his passion for a career.  While in high school, Dan got his first job at KOYY Radio as an afternoon announcer. Since that time, he has worked at several radio stations including eleven years at KZSN-FM as mid-day on-air host and music director.  In 2004, Dan moved to Kansas City to join KFKF-FM as the afternoon personality.  In 2006, he earned certification as a Broadcast Meteorologist through Mississippi State University.  He is president of the Storm Report Radio Network.  Dan is a member of the National Weather Association and the American Meteorological Society.   During college basketball season, Dan will be rooting for the Wichita State Shockers.

Matt is the owner of the Innovative Construction and Building Materials blog and a content writer for the building materials industry. He is focused on helping fellow homeowners, contractors, and architects discover materials and methods of construction that save money, improve energy efficiency, and increase property value.

OKTornadoDB, short for Oklahoma Tornado Database, was founded in 2018 as a socially interactive, educational database and live coverage source for tornadoes past, present, and future occurring inside of the boundary lines of the “Sooner State”.  Founded by a historian, former chaser, and devoted dad, the database also includes input from an amateur meteorologist and a career storm spotter.  The database has made it’s primary home on Twitter, but hopes to take full advantage of it’s array of online content mediums to continue its goal of educating those interested in the wild historical ride that is Oklahoma’s turbulent relationship with mother nature and her cyclonic offspring.  A secondary mission of the database is to unearth source materials including stories, photographs, and videos of some of the state’s long forgotten tornado events. Through an outpouring of support from local citizens, NWS officials, meteorologists, chasers, and others, the database has been able to deliver many stories, statistics, and photos once thought lost to history, or in some cases previously not widely known to publicly exist.

Harrison earned his Bachelor of Science degree in Meteorology and Minor in Geography from The Pennsylvania State University in 2018. Harrison has extensive interests in dual-polarimetric radar, and its applications to operational forecasting and hail detection. He first started storm chasing in May of 2015, and has spent extensive time in the Great Plains since then while also participating in the Insurance Institute for Business and Home Safety (IBHS) Hail Study during the Spring of 2018. Recently, in May of 2019, Harrison led a group of undergraduate students from Penn State on a university-sponsored storm chasing trip, teaching the students about severe storms forecasting and about storm-scale dynamics while on the chase. In his free time, he enjoys traveling, watching lots of hockey, and chasing during the springtime convective season.

Nelson Tucker is a high school student in Virginia who will soon be moving into his senior year. Having been fascinated with weather since young childhood, Nelson developed a rather specific focus on severe weather. Over time this interest has grown greatly, and he has spent much of the last eight years immersing himself in the science and history of volatile weather to increasingly greater depths. This includes a Google Earth project to map the damage swaths of every noticeable damage path from a tornado visible by satellite imagery, which is currently at a few hundred but far from finished. The most important personal project to Nelson is his work to analyze the highly understudied Smithville tornado’s aftermath with satellite and aerial imagery. Currently, Nelson hopes to go to college so he can continue his study of meteorology/atmospheric sciences, and create informative, detailed works on tornado history for Tornado Talk.

Nick lives in Altoona PA. He is a Skywarn Spotter for the NWS State College. In 2015 he helped start the Penn State Altoona Meteorology Club and was a Penn State Meteorology Major. He took some time off from school, and in August 2017 went back to California University of Pennsylvania to further his education. He is Vice President of both the CalU Meteorology Club and the CalU GIS Club. When Nick was 2 years old, he saw the tornado in the Wizard of Oz and immediately became fascinated with tornadoes. He enjoys reading about tornadoes, whether its tornadotalk.com, articles on the AMS website, and the damage surveys, he checks the NWS Damage Assessment Toolkit on a daily basis to see if any damage surveys have been posted on there. After seeing the many errors in the tornado database, he started his own database of tornadoes in Pennsylvania and has attempted to document every tornado in Pennsylvania since the first known tornado in 1724. Nick’s Personal Database got him an Internship, starting in December 2019, for the NWS State College to fix the Central Pennsylvania Tornado Database hosted by the Mississippi State University.

The articles that have been written on our website have taken a great deal of time to create. We document all the details from a particular tornado event and cite all of our sources to the best of our ability. We ask that you don’t take our summaries and post on another blog, website, etc. If you would like to reference a particular summary in a blog or project, please contact us and let us know – we will be more than happy to grant permission on an as-needed basis.

Most of the images located on this website are from government agencies such as the NWS or FEMA. However, there are some images that were licensed to us to be used only on this website. If you would like to use an image in your project or blog, please contact us and let us know.

Most tornado track maps are created by Tornado Talk. If the track map contains our logo, then you may use it freely on social media or in your blog post with credit. Please include a URL link to our website or tag us on social media.