39 tornadoes were confirmed on March 1, 2007.  We look at a strong twister, given a rating of EF3 that moved through parts of Webster, Sumter, and Macon Counties in Georgia.  The town of Americus was hit hard.  Here is the detailed summary from the NWS Atlanta:

A total of 14 tornadoes affecting 17 counties tracked across central and east-central Georgia and within the Peachtree City, Georgia county warning area during the late afternoon and evening hours of March 1st.  This was the second greatest number of tornadoes recorded to have occurred in the Peachtree City, Georgia forecast area within a 24-hour period, second only to the 16 tornadoes, affecting 18 counties, associated with Hurricane Katrina on August 29, 2005.

While the overall path length of the tornado was around 40 miles, the path length within Webster county was between seven and eight miles.  While the tornado reached its maximum path width of 1.0 mile in Sumter county near Americus, it was determined to be less than this within Webster county.  A path of significant damage was noted across southeast Webster county.  A concrete block house and two machine shops on East Centerpoint Road just northeast of Chambliss were completely destroyed.  Three injuries resulted from the damage here.  Twenty-five feet of asphalt in front of the home was also ripped up by the tornado.  On a nearby farm, five cows were killed when they were tossed about by the tornado.  A tractor-trailer traveling on Georgia Highway 520 near Chambliss was overturned causing it to catch on fire and burn.  Very nearby, at the intersection of Georgia Highway 520 and TV Tower Road, a 1096 foot Georgia Public Television transmission tower was destroyed when two-thirds of the tower was twisted off by the tornado and destroyed.  Only 150 feet of the 1096 foot tower was left standing after the tornado passed. Numerous trees and power lines were also down in the area.

The tornado entered Sumter county about 4.75 miles southwest of Plains in southwest Sumter county and exited the northeast part of the county about 9 miles north of Methvins in northeast Sumter county.  This was by far the most violent and devastating tornado of the March 1st outbreak.  The tornado tracked roughly 32 miles across Sumter county with a maximum path width of 1.0 mile wide, which occurred in the Americus area.  Damage within the city of Americus was extensive, although structures, trees, and power lines were down along the entire path of the tornado.  The most significant damage in Americus was to the Sumter Regional Hospital, of which a significant portion was destroyed.  Hundreds of homes and businesses in the Americus area were either totally destroyed or sustained significant damage.  Hundreds of vehicles were also damaged or destroyed by debris and/or tossed about like matchsticks.  The majority of the damage was within the vicinity of the Sumter Regional Hospital.  Two deaths were reported at a home in Americus when a wall collapsed on a 43 year-old male and a 53-year old female.  At least eight injuries were documented, but there may have been more.
Within the city of Americus, proper, there were 1235 total structures damaged or destroyed, including 217 businesses, 993 residences, 3 cemeteries, 10 churches, 1 fire station, 1 hospital, 8 recreational facilities/parks, and 2 schools.  There were 75 structures (42 businesses, 31 residences, 1 hospital, 1 church) were destroyed.  There were 148 structures (27 businesses, 116 residences, 3 recreational facilities/parks, 2 churches) with major damage.  There were 331 structures (60 businesses, 260 residences, 3 recreational facilities/parks, 5 churches, 1 school, 2 cemeteries) with moderate damage and 681 structures (88 businesses, 586 residences, 2 recreational facilities/parks, 2 churches, 1 school, 1 cemetery, 1 fire station) with minor damage.

A damage survey conducted by the National Weather Service in Peachtree City confirmed that the EF3 tornado, that originated in Webster county near Chambliss and tracked across Sumter county from south of Plains, through Americus, to north of Methvins, continued briefly into extreme southern Macon county before lifting south of Oglethorpe just west of the Flint River in a very rural, swamp like area of the county.  The tornado path length within Macon county was approximately three miles.  Damage within Macon county was confined to trees and a few power lines. 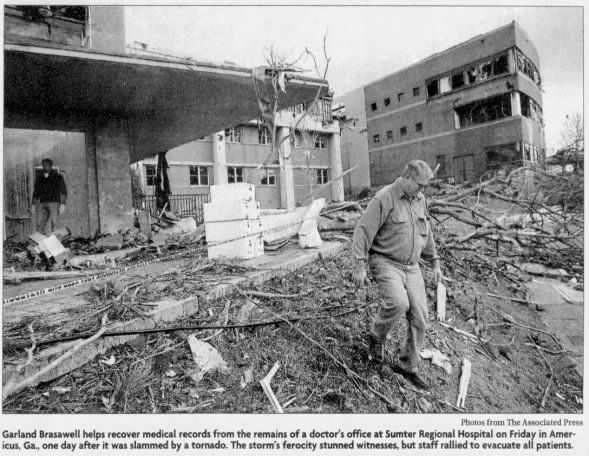 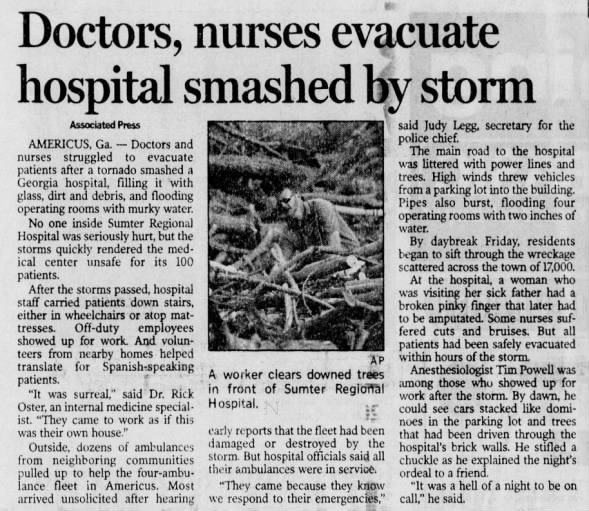 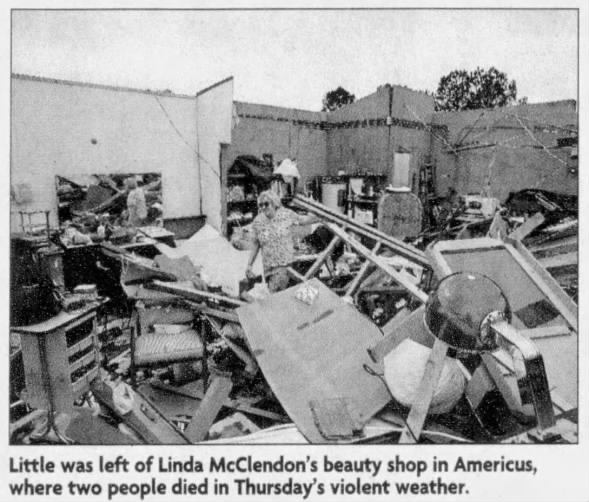 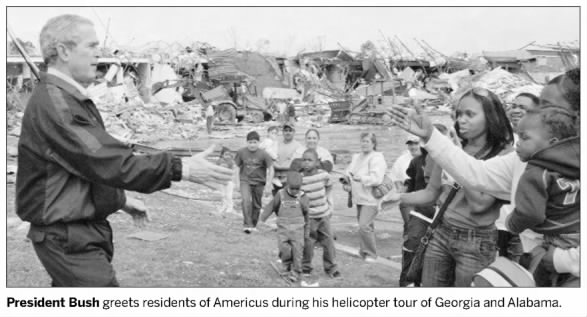