Some of these older events are quite a challenge!  I have poured over this one a few times.

The SPC Database lists an F4 that moved 82.6 miles through DeSoto, Caddo, Bossier, and Webster Parishes.  I plot the coordinates given by SPC and NCDC and see a path that begins near the Shelby County, TX/DeSoto, LA Parish line.  It stretches from Logansport, LA, through southern Shreveport, to near Shongaloo.

To gather the details on what happened, I look at other sources:  The February 1950 Climatological Data National Summary (CDNS) and Significant Tornadoes by Thomas Grazulis.

CDNS has an entry for a tornado in the Shreveport area.  It lists no specific parishes, path length, or width.  It does mention several communities in the summary.  Some of them lie within the SPC path, and some do not.  Here is that summary:

As you can see, NOT a lot of detail on what happened, and this makes it seem that the tornado was not only in Louisiana but started in Texas and ended in Arkansas.

When you look at the SPC track, the path starts near the Shelby County, TX / DeSoto Parish, LA line.  There are two separate entries in the CDNS for damage in communities in Shelby County.  One entry for Haslam and one for Center.  Neither have path lengths.  The SPC database also has listings for two tornadoes in Shelby County.  I have plotted only the first entry.  It extends NE from the Center area but falls short from going into Haslam.  The second entry is essentially a point near Center.  There are no indications there were two tornadoes near Center that may be an error.

Using SPC and CDNS, we could deduce that we possibly have a tornado that tracked from Shelby County, TX, and Louisiana.  The paths do match up.  The Mt. Holly path does not match, so I believe that was a separate tornado.

So, Grazulis is showing three separate tornadoes.  The first combines the two entries for Shelby County in SPC and adds part of their F4 (DeSoto Parish part).  The second tornado is another chunk of that F4.  And then the third is the tornado in Mount Holly, AR.

I document all of this because the SPC Database has an F4 that moved 82.6 miles through four Louisiana Parishes.   Trying to prove that happened has become difficult.  CDNS has no official path length, so that doesn’t help.  They also indicate the “possibility” the path started in Texas and ended in Arkansas, which complicates matters.  Grazulis has a tornado in Caddo and Bossier Parishes with a path length of 20 miles.  He has the DeSoto section in a different tornado tied to Shelby County.  He doesn’t include Webster Parish.

So, what happened?  We may never know for sure, but here is my guess:  It would seem we either had a skipping tornado or family move out of Shelby County, TX into De Soto, Caddo, and Bossier Parishes.  Unknown if there was damage through Webster Parish.  There was a separate tornado in Mt. Holly, AR.

I have named this summary “Ark-La-Tex Tornadoes of February 12, 1950” – I include damage/injury/fatality details based on Grazulis’ researched tornadoes. 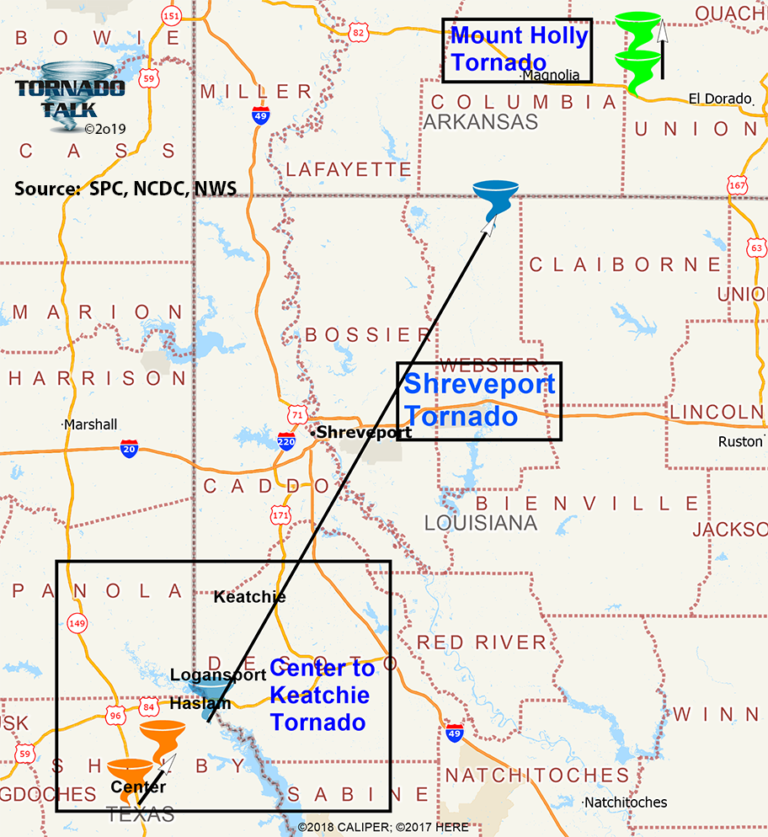 Per Grazulis, this tornado moved north from 5 miles south of Center to southwest of Haslam.  It then moved 2 miles north of Logansport, LA, to the east of Keatchie.  CDNS reports several homes destroyed and several hundred chickens killed in Haslam.  In Center, buildings were damaged in Jericho and Fellowship Communities.  CDNS reported no deaths in Haslam.  Three deaths were reported in Center.

Grazulis states there was a death SW of Haslam.  Two others were killed as a house “blew apart” while having lunch in the “Fellowship” community.  He states that it was on the south edge of Haslam. 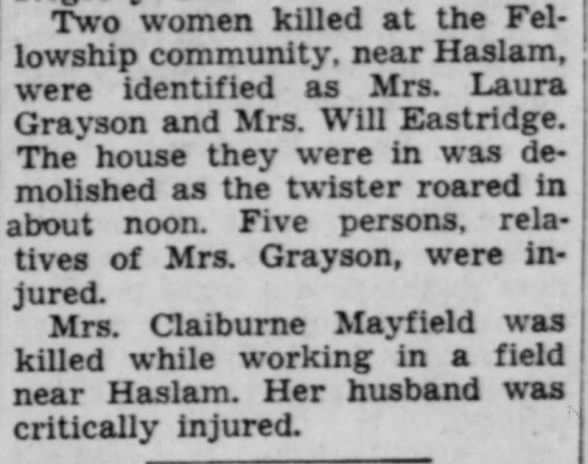 Near Logansport, Grazulis notes a woman was killed in her destroyed home.

He gives this tornado a rating of F3, a path length of 30 miles, and a width of 150 yards.  There were 37 injuries and four fatalities.

Per Grazulis, this tornado moved north-northeastward from north of Stonewall through Slack Air Force Base.  He notes homes were destroyed NW of Forbing.  Two people were killed in homes in the “Hood Quarter” at the south edge of Shreveport.  At Slack AFB, five airmen and a civil employee were killed as the reconsignment depot was leveled.  Airmen were injured in the mess hall and barracks. Grazulis list this tornado as an F4, with a 20-mile path and 200-yard width.  He lists 70 injuries and eight fatalities.  CDNS had limited details on what happened. 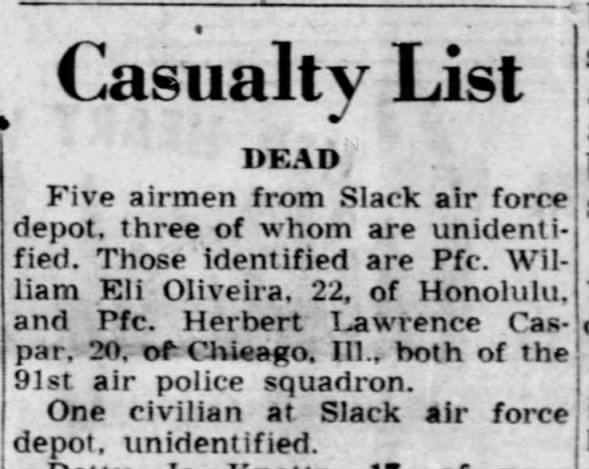 The tornado moved NNE passing 5 miles north of Mount Holly.  Three homes and several barns were destroyed.  Grazulis lists this tornado as an F2 with a 6-mile path and 20-yard width.  There were no injuries or fatalities.  CDNS adds that a store was slightly damaged.  An oil field south of Mount Holly was hit, toppling two derricks.  They state “heavy winds” caused the damage.  But it could have been the tornado. 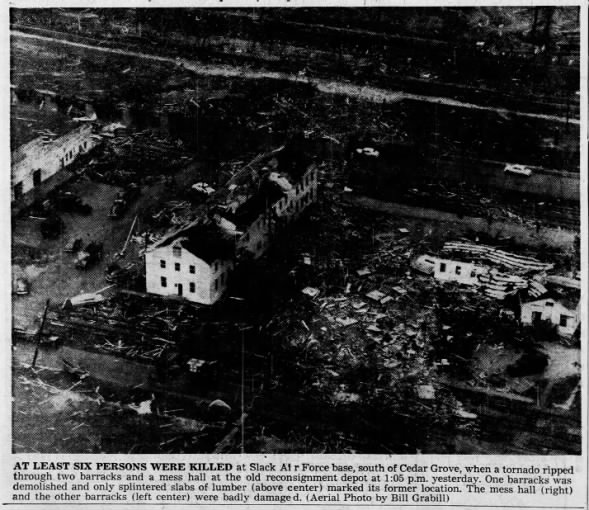 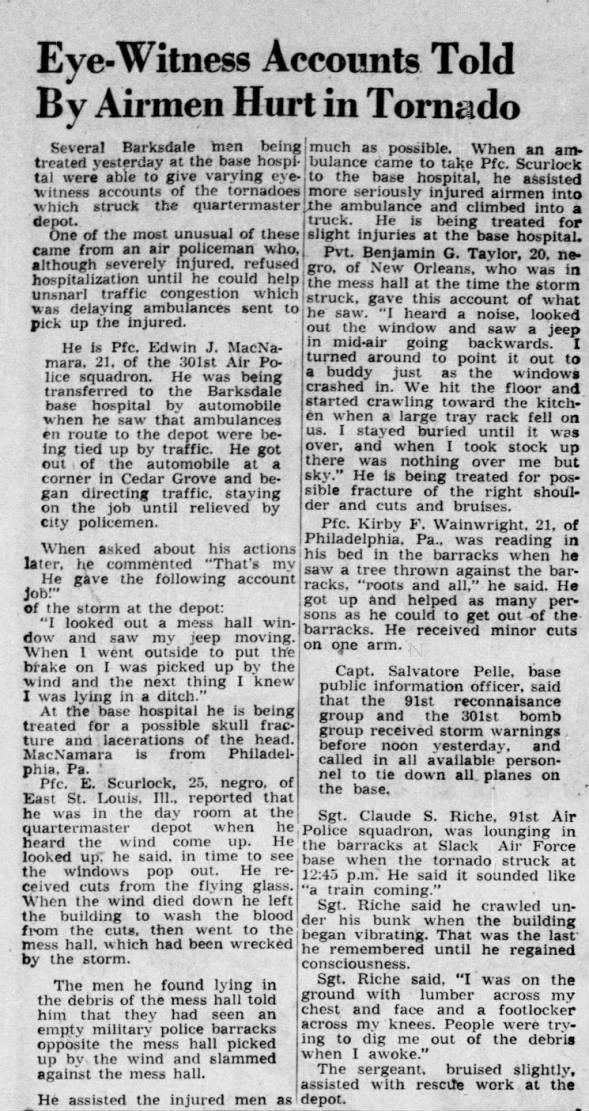 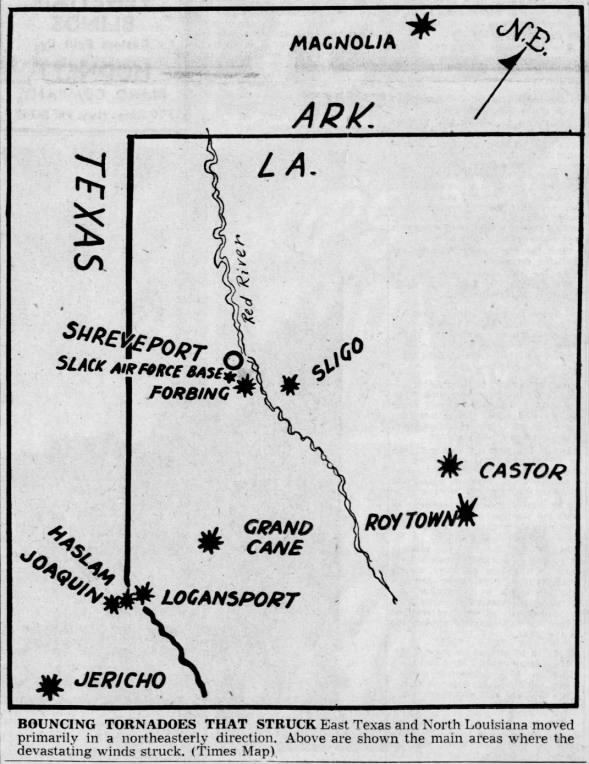 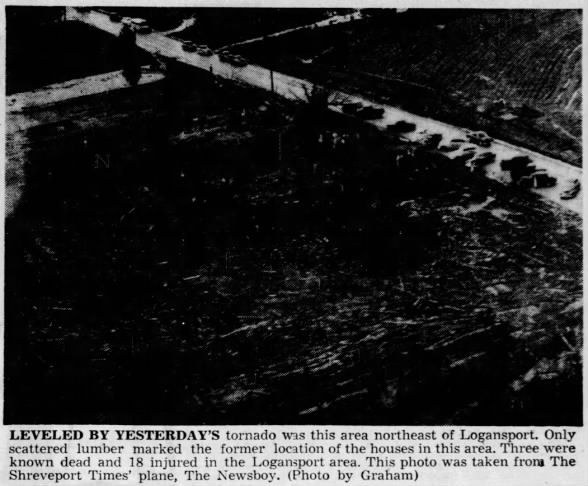 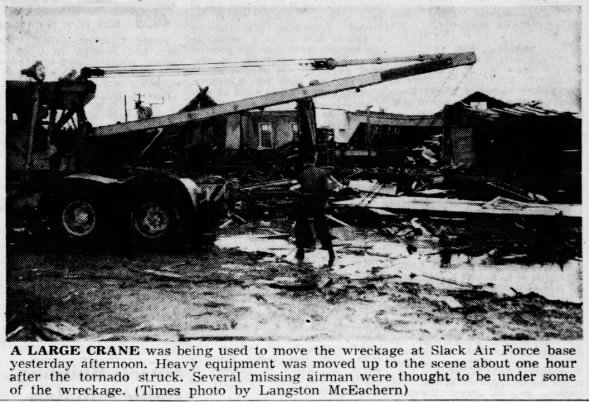 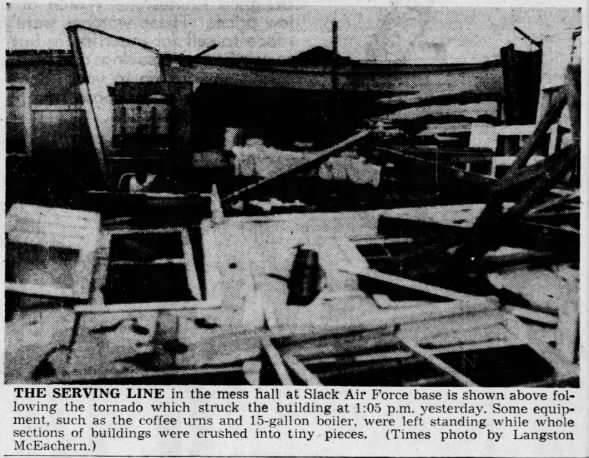 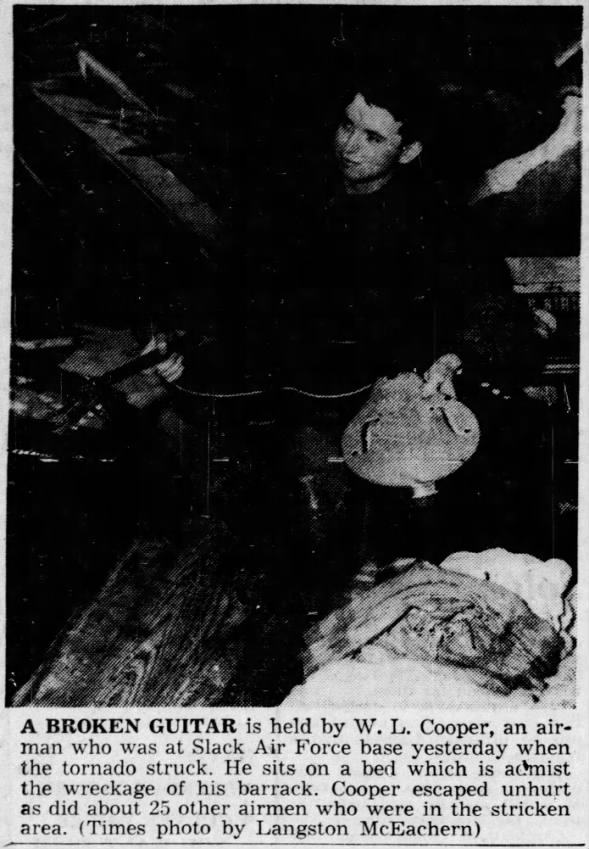 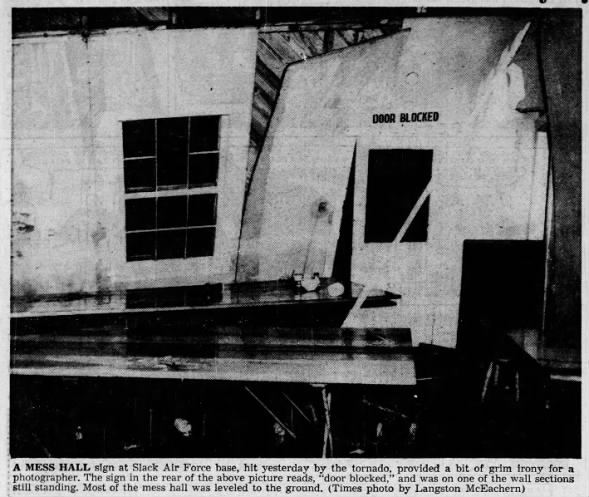 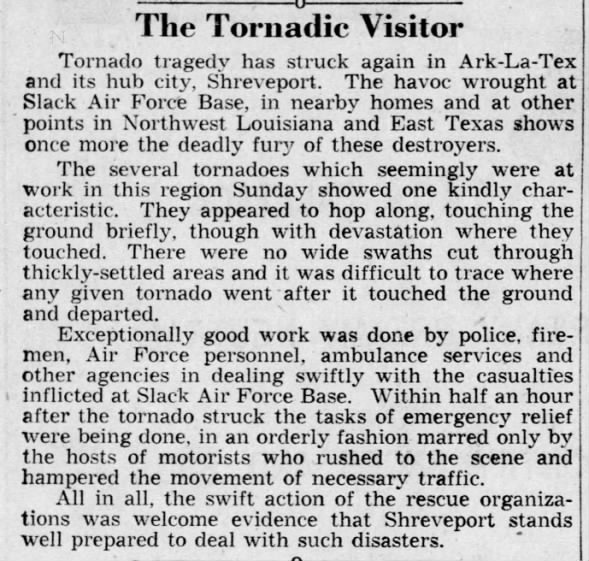