Eight tornadoes were recorded on July 31, 1966, across the Dakotas.  The strongest was later rated F3.  It tracked from south of Ashley, ND, and into North Dakota, north of Long Lake.  It was in the Long Lake area that a car carrying Mr. and Mrs. Leo Fischer and their 3 children was carried down a county road.  Per a newspaper article in the Argus-Leader, Sioux Falls, “all but one child were thrown from the car.” Mr. Fischer was found dead at the scene.  His wife died later in the hospital due to injuries caused by the crash.

Five farms near Ashley were destroyed, and per Thomas Grazulis in Significant Tornadoes, one had near-F4 damage.  Per the Argus-Leader article, “A section of Highway 101 south of Long Lake was ‘rolled up like a rug.'”

The Storm Data entry is separated in two parts by state.  The North Dakota portion is a part of a larger entry describing a “widespread violent storms which covered much of 17 North Dakota Counties…”.  7 tornadoes were produced.  In the midst of this blurb, the McIntosh County portion of this event was mentioned.  That part states:  “A tornado south of Ashley caused damage on five farms and one death and 3 injuries after it moved southward into South Dakota.”

Here is the South Dakota entry.  The location is “Long Lake and vicinity:  Four funnels were sighted.  The tornado picked up a car with family of five causing fatal injuries to the two adults and injuries to the three children.  Apparently the driver sighted a funnel in front of him and turned right to avoid it but drove into another funnel.  Storm moved from NW to SE. 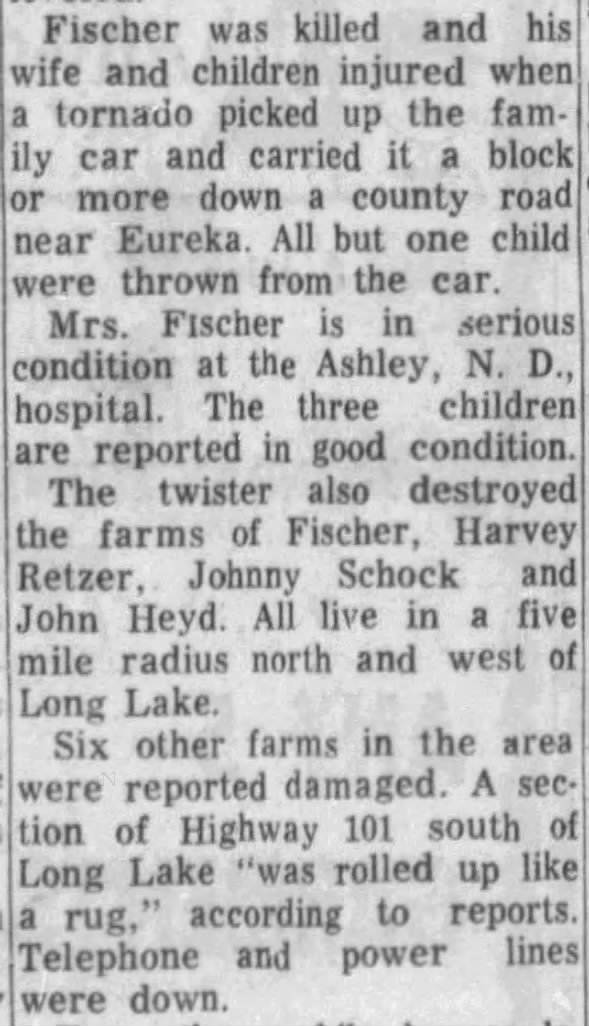 We gathered information for this event from the SPC & NCDC Databases, the July 1966 Storm Data Publication and Thomas Grazulis in Significant Tornadoes and found the following differences: