An isolated supercell developed just northwest of Atlanta, GA, during the evening of March 14, 2008.  As the storm moved into the city, it produced a tornado that caused damage on a 6.25-mile path from west of the World Congress Center in Fulton County to the south of I-20 in Dekalb County. Per the Storm Data Narrative, the tornado moved due east.  The official SPC latitude and longitude plot show a more SE track.  Max winds were estimated at 130 mph.

The tornado developed near the intersection of Simpson and Burbank Streets in the Vine City neighborhood just west of Downtown Atlanta.  It moved over the middle of the Georgia World Congress Center and about 100 yards north of the Georgia Dome.  The tornado struck during an NCAA basketball game between the University of Alabama and Mississippi State University.  The storm hit at 938pm EDT, and the game was in overtime.  Had it ended after regulation, thousands of people would have been in the streets heading home.

The tornado left the Georgia Dome and moved across the CNN Omni Hotel Complex and Phillips Arena, where an NBA game was ongoing.  It moved over Equitable Bank tower, across the Interstate 75/85 Downtown Connector at the Edgewood Exit and then into the Cotton Mill Lofts and across Oakland Cemetery.  The tornado weakened and then lifted in Western Dekalb County.

Approximately 50 homes were damaged.  Several multi-story towers and commercial buildings near and east of Centennial Olympic Park also sustained damage.  Windows were blown out of several of these buildings. Some of the most significant damage was at The Cotton Mill Lofts.  The roof was blown off, and exterior walls on the top or fourth floors were blown inward.  Two sections of the fourth floor collapsed all the way into the basement of the building, trapping several people.

There was one fatality.  It occurred in a parking lot across Decatur Street near the Martin Luther King Jr. Marta Station.  A brick and stucco wall collapsed the victim. 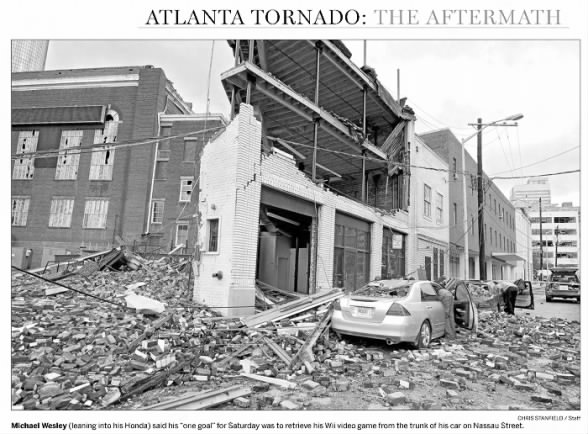