The Plainfield, IL F5 Tornado – August 28, 1990. It was the deadliest and most damaging tornado of 1990. It crossed just over 16 miles in less than 30 minutes across parts of Kendall and Will Counties in Illinois. There was an estimated $165 million in damages. A total of 470 homes were destroyed and another 1000 were damaged. 29 people were killed and 350 more were injured. Read the full summary here!

August 28, 1884:  A tornado family crossed through parts of South Dakota. The second member of the family traveled SSE and SE from about 5 miles NNW of Forestburg.  Grazulis denoted that at least one home was leveled and swept away. “Two brothers were caught in the open in that area, and one was killed.” The photo below was taken by F.N. Robinson and is found in the NOAA library. Per Grazulis, the location of the tornado is 5 miles SE of Forestburg, almost due west of Howard. It is one of the oldest known photographs of a tornado. At this time, the oldest known photograph of a tornado was taken on April 26, 1884 at Garnett, Kansas. 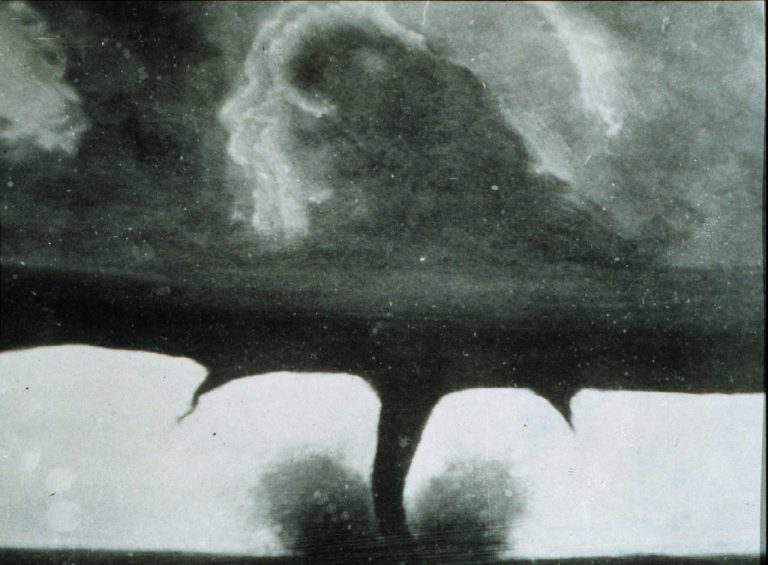 A line of severe storms marched across Wisconsin on August 28, 2018. Nineteen tornadoes were spawned by these storms. The strongest was rated EF2, which occurred near the town of Brownsville. A communication tower was toppled, and several farm buildings were destroyed along the 3.95-mile path. For more information, click here.

August 28, 2005: Hurricane Katrina reached peak intensity as a 175 mph Category 5 in the Gulf of Mexico. Source.

In 1963, Martin Luther King Jr. delivered his “I have a dream” speech at the Lincoln Memorial, in Washington, D.C. Check out more historical events at onthisday.com!

American figure skater Scott Hamilton was born on this day in 1958 in Toledo, Ohio. Source:  Britannica.

On this day in 1988, during the 40th Emmy Awards: Thirtysomething, The Wonder Years & Richard Kiley win. Get more daily history at onthisday.com!

In 1970, During a four-week engagement at The International Hotel in Las Vegas, a security guard at the hotel received a phone call in which he was told Elvis Presley would be shot during his last show. The person demanded $50,000 to reveal the name of the potential killer. Later that day a menu was found in Elvis’ mail at the hotel on which Elvis’ face was destroyed and a gun had been drawn pointing to his heart. The threats were taken very seriously. Elvis played his last show without any incident. Get into the groove with more music trivia at thisdayinmusic.com!