A major tornado outbreak of 74 tornadoes occurred on November 17, 2013. There were two EF4s, both in Illinois. 7 tornadoes were reported EF3. The tornado in this summary was given a rating of EF2. It was unique as it had the largest tornado width reported during the outbreak and for November 17 (1950-2017): 1200 yards.

This twister tracked closed to 12 miles through parts of Benton and White Counties in Indiana. Per the NWS Storm Data entry, the “exact determination of maximum intensity was difficult due to vastly open country and lack of trees and other objects.” In Benton County, the tornado damaged an outbuilding. “Several wood projectiles from the building stuck into a nearby garage roof.” Debris was lofted about three miles downstream.  Another outbuilding was damaged and numerous trees were blown down or snapped. Max winds in Benton County estimated at 95 mph.

The tornado strengthened as it moved into White County. Max winds were estimated at 120 mph. Initial damage in this county was minor, a few trees were downed and the door of a west facing pole barn was pushed in. The tornado moved quickly to the northeast and hit a residence on 900 West.  The chimney was knocked down and there was shingle damage. Also, a large propane tank and camper was rolled about 150 feet. The camper was destroyed. The tornado moved over open fields for about four miles then crossed I-65 between mile markers 188 and 190.  There was brief strengthening noted after the twister crossed the interstate.  Ten 18-24 inch diameter power poles were snapped. Toward the end of the path, a pole barn was destroyed and debris was thrown upwards about 3/4 of a mile. The tornado ended west of County Road 300 West and north of State Route 18. There were no injuries or fatalities with this event. 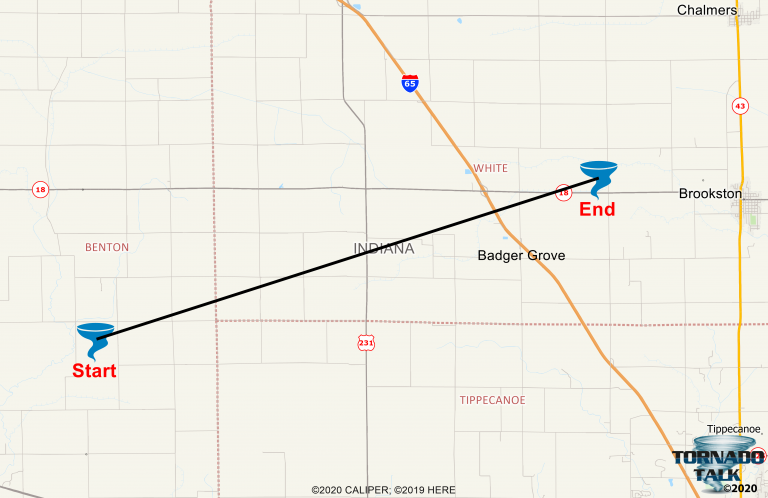