There was only one tornado confirmed on June 24, 1970.  It was a devastating quick-hitting twister in Nueces County, TX.  It destroyed the Golden Acres Trailer Park just to the east of Bishop.  Per newspaper articles, a farmhouse was hit first and injured Hal Boswell.  It then struck the trailer park.

The Storm Data Entry describes the damage as such. “The tornado tore the trailer homes apart like matchboxes…”. “The destruction was so great that it was impossible to tell how many trailers were involved and where they had been situated before the tornado hit.”

Tragically, an infant was killed.  Per an article in the Courier-Gazette (McKinney, TX):  A little boy was “sucked out of his crib.”  The article notes that The Kingsville Naval Air Station Security Force sent over 150 sailors to search through the mud for the baby.  “The child was found in a pool of water a dozen yards from his trailer.”  The search took 4-5 hours.

The infant son of Mr. and Mrs. J. E. Allred was killed, and 15 persons were injured when a tornado destroyed the Golden Acres Trailer Park about 1 mile east of Bishop.  The baby, said to be less than one-month-old, was found after a four-hour search.  The tornado destroyed all but nine of the estimated 20 mobile homes in the park.  Most of those not destroyed were damaged.  The tornado tore the trailer homes apart like matchboxes, scattering the remains of the homes and their contents over a large area.  The destruction was so great that it was almost impossible to tell how many trailers were involved and where they had been situated before the tornado hit.  Total property damage was estimated at $150,000.  Crop damage was estimated at $5,000.

The Storm Data Narrative indicates the tornado hit 1 mile East of Bishop.  The lat/lon provided is incorrect.  It plots SSE of Bishop. 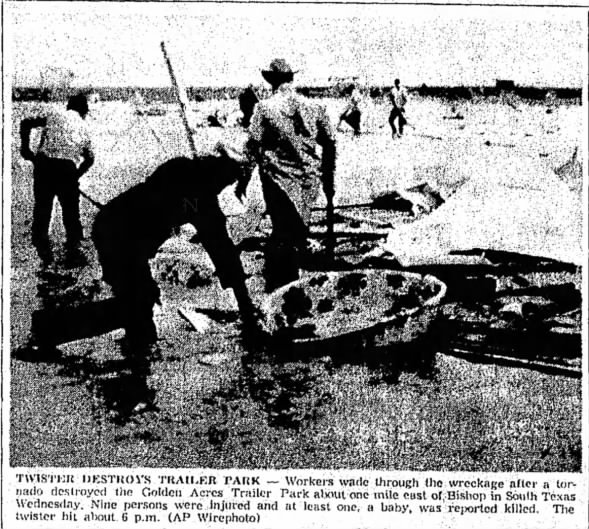 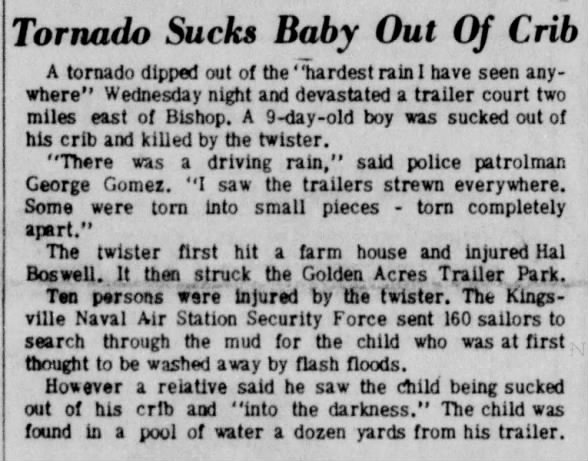 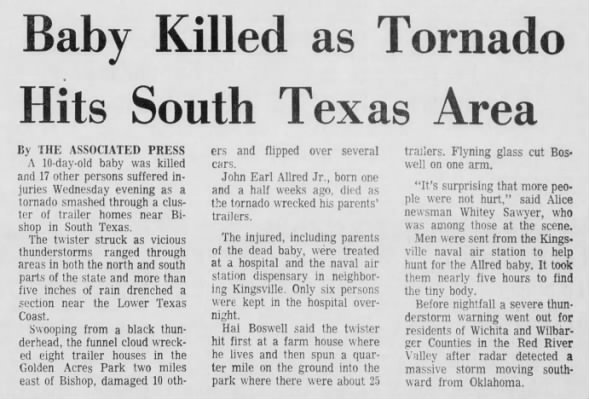 We gathered information for this event from the SPC & NCDC Databases, the June 1970 Storm Data Publication and Thomas Grazulis in Significant Tornadoes and found the following differences: