This devastating event began at Cooks Valley, about 2 miles west of Bloomer.  The tornado clipped the NW part of the town. Approximately 50 homes were demolished.  100-150 other homes and businesses sustained damage.  The tornado traveled a total of 19-20 miles.  After leaving Bloomer, it remained in sparsely populated areas.  The tornado ended near LaRose Lake.  There was some farm damage at the end of the path.

I found a couple of fascinating papers authored or co-authored by Ted Fujita.  He flew over this path, taking aerial photos.  I included some of his findings in an area below our track map.

A devastating tornado first touched down at 6:35pm CST at Cooks Valley near County Hwy. A and Hwy. 40 which is about two miles west of Bloomer destroying some farms.  The tornado moved into extreme northwest Bloomer where about 50 homes were demolished.  100 to 150 homes and businesses along the storms’ path sustained minor to major damage.  Major damage occurred on a farm as the storm crossed Hwy. 64 after leaving Bloomer.  The path of the tornado continued through a sparsely populated area for about 16 miles northeast of Bloomer.  The tornado finally lifted east of County Hwy. E near LaRose Lake.  Some farms were destroyed along the latter portion of the tornado’s path with considerable damage occurring to crops and farm machinery.  Total damage by the tornado amounted to approximately six million dollars.

I found a paper entitled “Aerial Survey and Photography of Tornado and Microburst Damage” by Ted Fujita and Bryan Smith from October 1991.  “Presented in this paper is the overview of the results of the aerial photogrammetric interpretation of tornadic and non-tornadic high winds documented from 1965 to the present.”  In the conclusion area, “An organized effort of fact-finding aerial survey, photography, and mapping of selected U.S. tornadoes by the Fujita group gave rise to the identification of the multi-scale surface winds associated with tornadoes. These wind systems are mesocyclone, tornado, and suction vortex which are blended into a complicated system of vortices.”  Pictures of the results of these winds from the Bloomer tornado were includes and I have extracted to include in this summary.  Read the full paper here.

Workbook of Tornadoes and High Winds for Engineering Applications 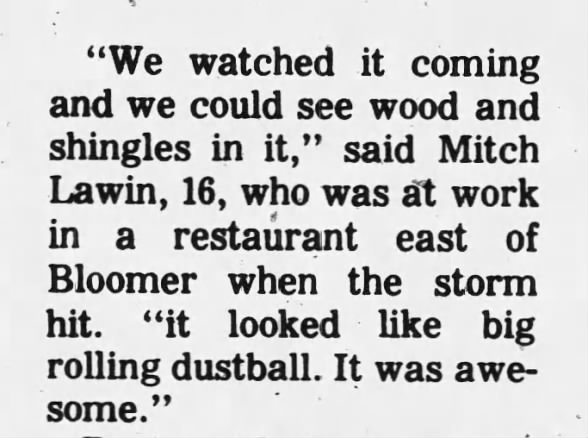 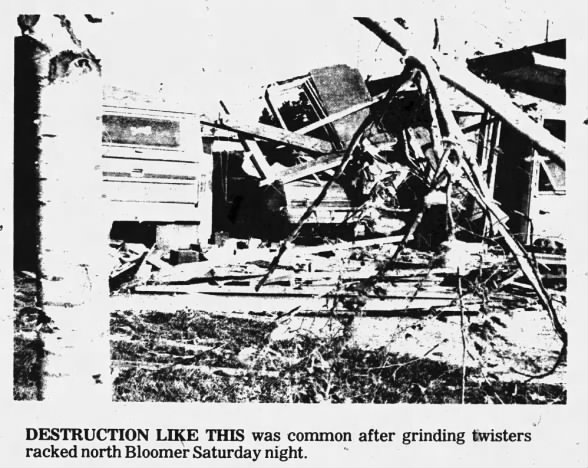 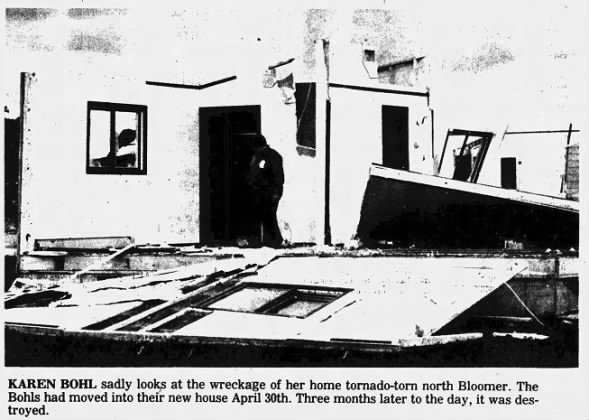 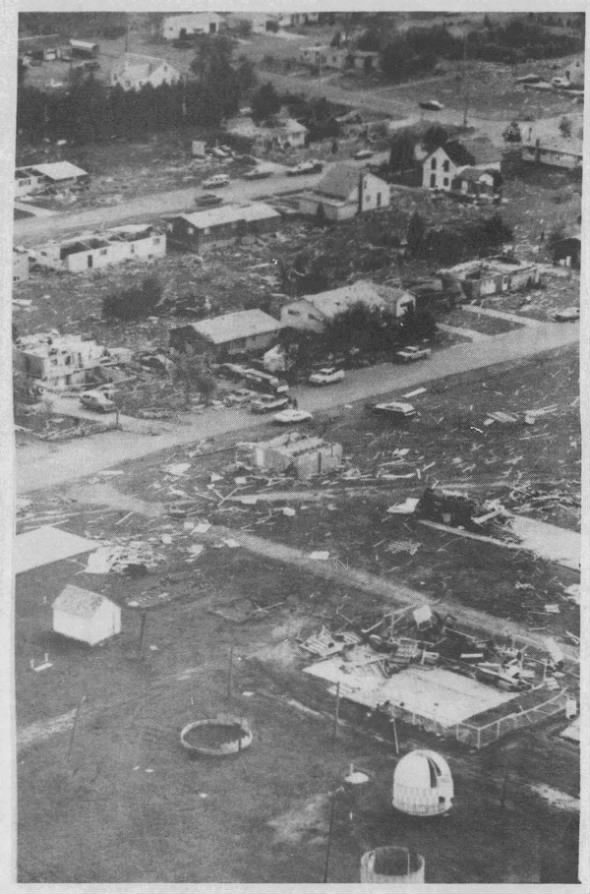 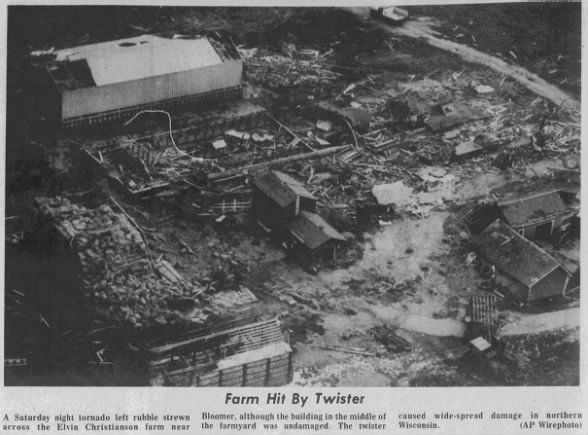 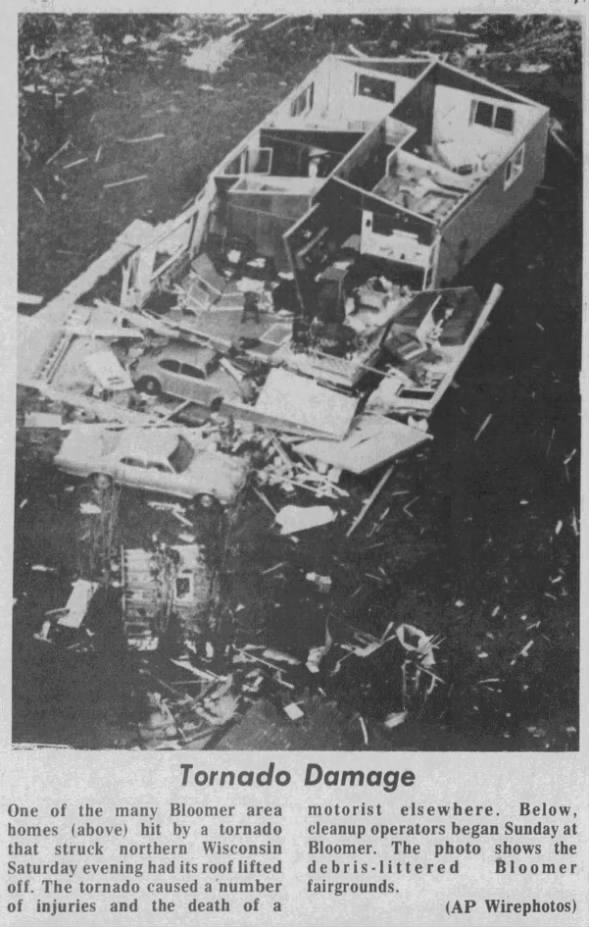 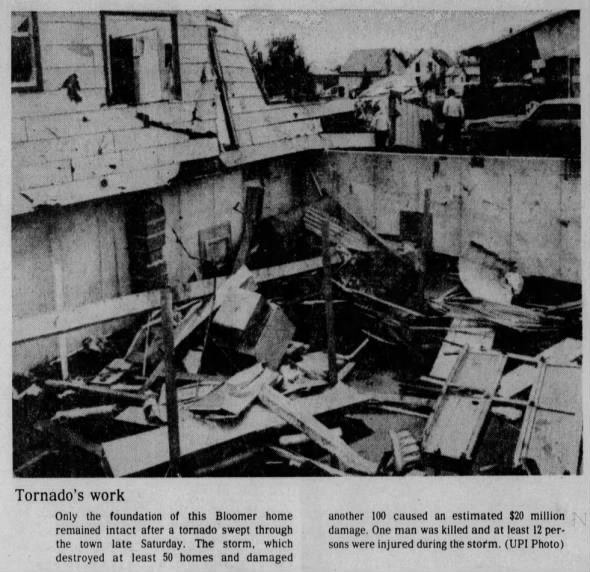 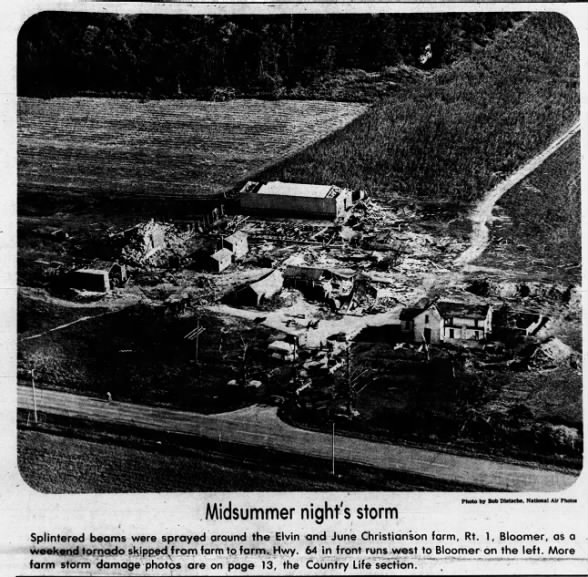 “Aerial Survey and Photography of Tornado and Microburst Damage” by Ted Fujita and Bryan Smith from October 1991.