This summary looks back at an estimated F4 tornado from January 31, 1908.  It crossed through parts of Jefferson, Copiah, and Simpson Counties in MS.  Information for this event came from the following resources:

Details from the Monthly Weather Review:

Here are some of the details extracted from the March 1908 Monthly Weather Review. The article was by W. S. Belden, Section Director. Dated Vicksburg, MS, February 17, 1908. Described as a “tornado of remarkable energy and duration.” Formed in the eastern portion of Jefferson County, MS, at 145pm CT. Moved easterly then east-northeasterly across Copiah County and to central Simpson County. They list a longer path length of 60 miles and state the tornado lasted one hour and forty-five minutes.

The path varied from 100 yards to 1/2 mile in width. The entry states seven people were killed and 30 injured.

First seen near Delmar before 2 pm moving to the east. “It appeared black and was attended by a high wind, heavy rainfall, and considerable hail.” At 2pm, the tornado moved near Union Church in SE Jefferson County. The Monthly Weather Review included an eyewitness account from that community.

After leaving Union Church, the tornado moved ENE through field and woodlands. Fences, trees, plantation homes, cotton gins, etc. were demolished. It hit Homochitto at 2:20pm and at 2:30pm moved through Bowerton. The postmaster, A. M. Millsap remarked that “it was the most destructive storm that ever visited this community and that all stock in the path of the tornado were killed.” He reported that a tenant house on his farm was swept away.

The report continues that the heaviest losses were at Martinsville. The tornado hit there at 245pm. It crossed the railroad 1/2 mile north of the depot. 12 families were left homeless and six of the seven fatalities were in this community.

The tornado passed north of Ashley, crossed the Pearl River at Georgetown. It was reported to be low on this ground in this area. 16 people were injured here.

There were areas in central and western Simpson County, up to 12 miles away from the track that reported debris. 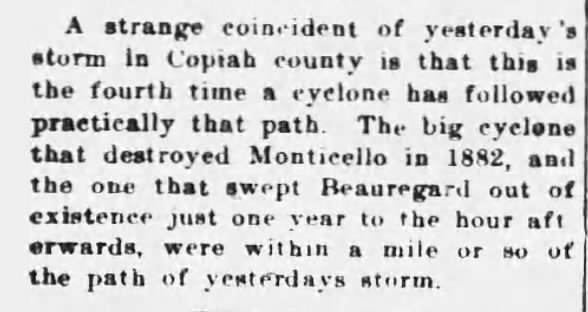 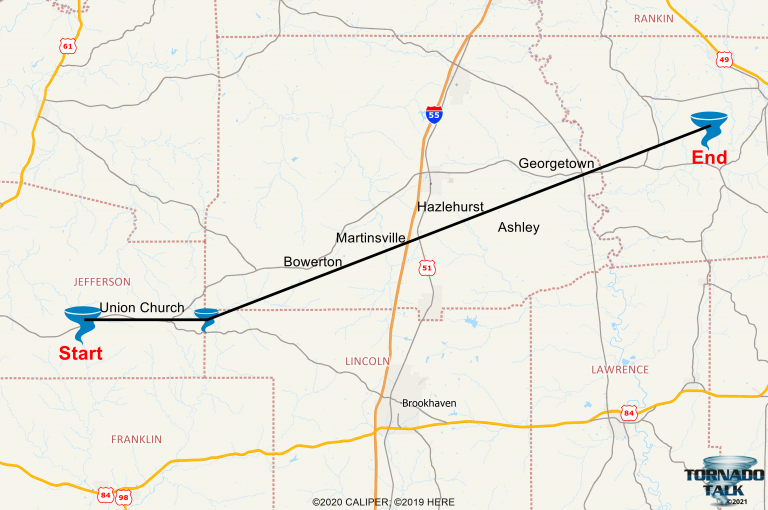 Since we don’t have official coordinates, I used the information from Thomas Grazulis to map the tornado track.  He stated the tornado moved E and ENE from just east of Delmar to near Bowerton and 3 miles south of Hazelhurst.  He mentions deaths at Martinsville.  He states the tornado crossed the Pearl River near Georgetown.  Path length of 40 miles.  I could find all communities with the exception of Delmar.

I have included a map I found in the Monthly Weather Review (MWR) from March of 1908 of the path.  I actually created my map before I found the MWR one.  I wasn’t TOO far off.