Per the Storm Prediction Center Database, 71 tornadoes occurred on May 3, 1999.  58 of these in the state of Oklahoma.  The most violent was the 9th of 14 tornadoes produced by a supercell thunderstorm during this outbreak. That supercell produced those tornadoes over a 3.5 hour period.

The Bridge Creek-Moore F5 tornado traveled 38 miles through parts of Grady, McClain, Cleveland and Oklahoma Counties.  The max width was 1 mile.  There were 583 injuries and 36 fatalities associated with this devastating tornado.

The first “Tornado Emergency” was issued by the NWS Norman office during this event.  Per their overview of the event, “with a large, violent tornado on the ground heading into the most populous center in the state of Oklahoma, the forecast office staff wanted to convey the message that would grab people’s attention and let them know that this event was something different than normal.”

This event also brought to light the dangers of taking shelter under a highway overpass.  Three people in Oklahoma lost their lives while doing so during the May 3, 1999 tornadoes.  Here is a very interesting slideshow presented at the 1999 National Weather Association Annual Meeting.  The goal: to counteract the long standing perception that sheltering under an overpass is safe when in actuality it isn’t.  Slideshow.

NWS Summary of This Event

This violent, long-lived tornado was the most infamous of nearly 60 tornadoes that struck central Oklahoma during an unprecedented outbreak on this Monday afternoon and evening of May 3, 1999. The tornado was the 9th of 14 tornadoes produced by a supercell thunderstorm during the tornado outbreak. It formed around 526 pm CST about 2 miles south-southwest of Amber, and grew rapidly to monstrous proportions as it headed NE, paralleling I-44. It moved across Bridge Creek and rural parts of northwest Newcastle, causing continuous F4 and sporadic F5 damage. The tornado was estimated to be a mile in diameter in this area.

It weakened to F2/F3 intensity and narrowed to less than 1/4 mile in width as it crossed I-44 and the South Canadian River northeast of Newcastle and entered far south Oklahoma City SW of 149th and May Ave. around 612 pm CST. But it regained F4/F5 intensity and widened again to 1/2 to occasionally 3/4 mile as it moved northeast across south Oklahoma City, entering Moore just west and north of 12th and Santa Fe.

Still moving northeast and still producing F4 and occasional F5 damage, it crossed I-35 at the Shields Blvd. junction and moved into northeast Moore, at which point it weakened slightly to F3/sporadic F4 intensity and began a gradual turn to the left. This turn took the tornado more to the north-northeast as it crossed I-240 between Bryant Ave. and Sunnylane Rd. It crossed southeastern Oklahoma City and entered Del City as an F4 tornado, width 1/3 to 1/2 mile, along SE 44th between Sunnylane and Sooner Rds, and continued north-northeast to the northwestern part of Tinker Air force Base, near SE 29th and Sooner Rd.

Continuing to turn slowly, it moved almost due north but maintained F4 intensity as it crossed I-40 just east of Sooner Rd. and continued north to between SE 15th and Reno Ave. The tornado then weakened rapidly to F0/F1 intensity as it crossed Reno Ave., and at 648 pm CST dissipated about 3 blocks north of Reno between Sooner Rd. and Air Depot Blvd.

Totals from this tornado include 36 direct fatalities (12 in Bridge Creek, 1 in Newcastle, 9 in southern/southeastern Oklahoma City, 5 in Moore, 6 in Del City, and 3 in Midwest City), 5 indirect fatalities during or shortly after the tornado, 583 direct injuries, numerous indirect injuries (too many to count), 1800 homes destroyed, and 2500 homes damaged. The tornado was also the 100th tornado to strike the Oklahoma City area since 1890. Total damage was estimated at $1 billion.

Radar and Images via NWS Norman 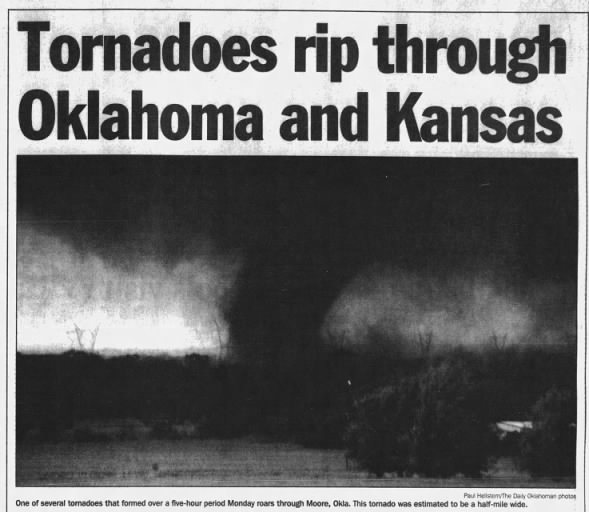 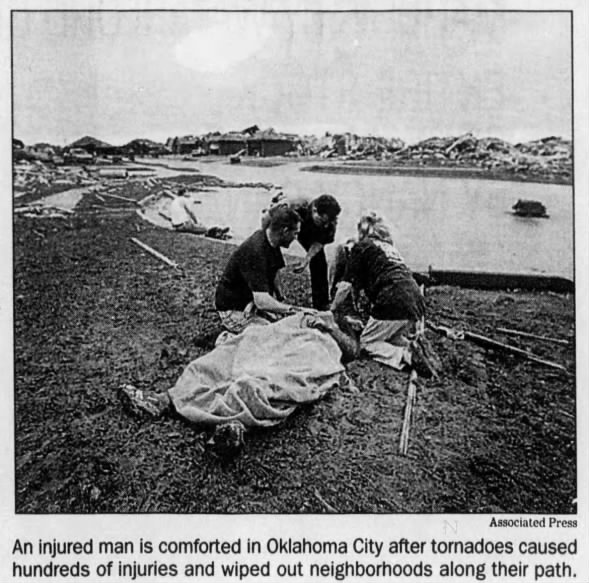 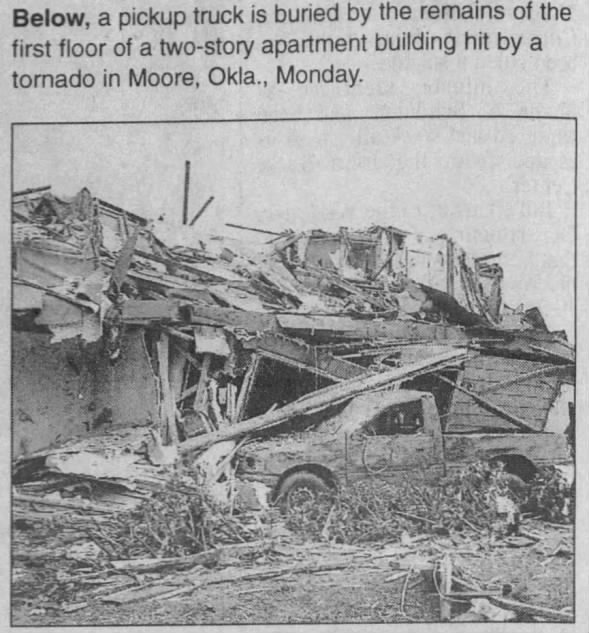 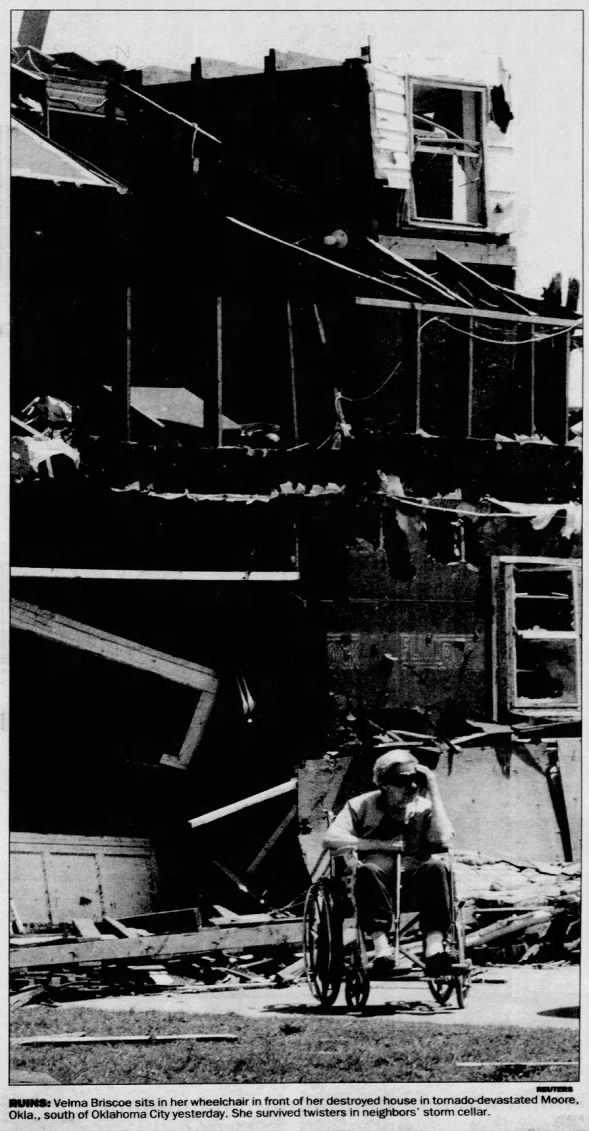 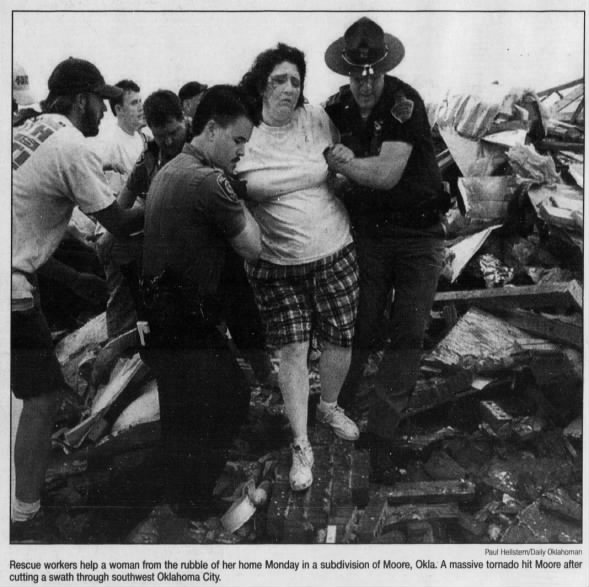 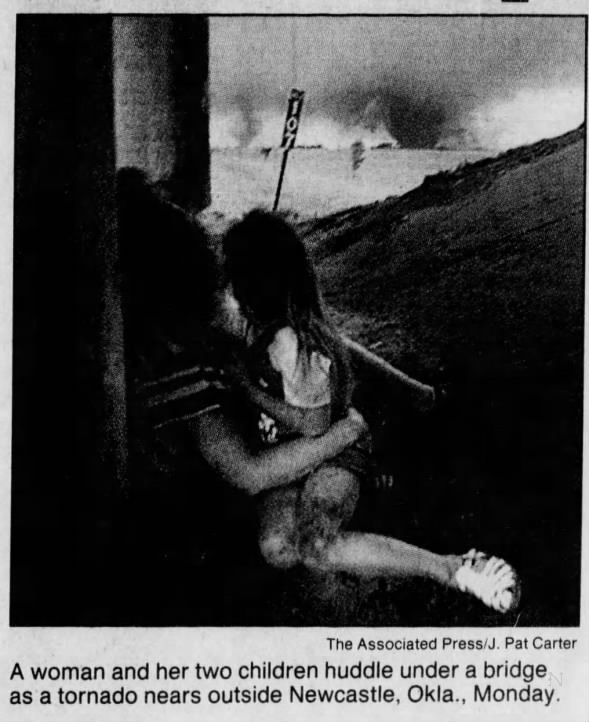 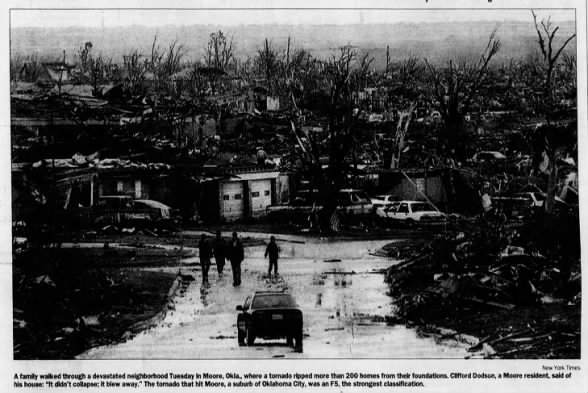 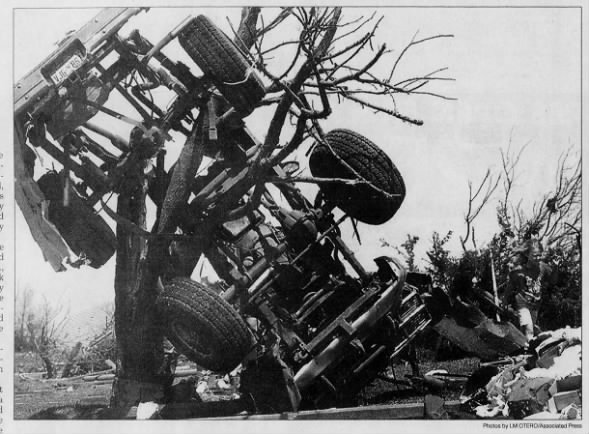 We gathered information for this event from the SPC & NCDC Databases and an overview from NWS Norman which includes Storm Data information and found the following differences:

Overview of Killer Tornadoes in Oklahoma (1950-Present) via NWS Norman

NSSL Overview of the Event