This early morning tornado is listed in the SPC database as one event starting in Staten Island, moving across the Verrazano Narrows and moving into Brooklyn.  When you read through the Storm Data Narratives, though, it would appear we had a family of tornadoes.

In the entry for Richmond County, the NWS states, “the first tornado touchdown was in Staten Island….”.  It moved east.  They note that after a re-analysis of radar data, the tornado dissipated as a second circulation developed north of the first. There was damage in the Tompkinsville area, and that may have resulted from the second circulation.  The Richmond County segment was rated EF-1.

In the entry for Kings County, the NWS talks about “this circulation intensified as it moved east across the Verrazano Narrows.”  What is unclear is whether or not this was the same circulation near Tompkinsville OR was it a brand new circulation?  So, did we ultimately have 3 tornadoes?  Or 2? They also mention that this tornado lifted and touched down at least twice. So it was not a continuous path in Kings County.

Damage on Bay Ridge Avenue consisted of 11 homes with moderate to severe roof damage.  Based on the assessed damage in this area, the NWS gave the tornado a rating of EF-2.

I have included 2 maps below.  The first is the SPC path.  The second shows the segments listed in the NCDC Database.  There is a 1.95-mile path in Richmond County and a 3.92 path in Kings County.

This tornado is one of the strongest on record to hit portions of the Bronx and was the first to hit the area in over 100 years.

The first tornado touchdown was in Staten Island at approximately 6:22 am in the vicinity of St. Austins Place in the Livingston-Randall Manor area. The tornado moved east, with additional damage occurring in the Tompkinsville area. Most of the damage in Staten Island was to trees, and estimated at EF-1 on the Enhanced Fujita Scale, with winds of 86 to 100 mph.

This circulation intensified as it moved east across the Verrazano Narrows. The tornado re-developed by the time the circulation moved on shore in Brooklyn. Damage in the form of fallen trees and structural roof damage occurred in Bay Ridge starting in the area from Shore Road between 71st and 78th Streets eastward to Bay Ridge Blvd. This occurred at approximately 6:32 am. The tornado may have briefly lifted and then touched down again on Bay Ridge Avenue between 3rd and 4th Avenues, and continued on an east-northeast path across 68th Street between 3rd and 4th Avenues. Eleven homes in this section had moderate to severe roof damage. The storm continued to move east-northeast into Leif Ericson Park Square, where severe damage to trees occurred. As the tornado lifted, it tore off the roof of the Nissan car dealership at the corner of 66th Street and Fifth Avenue. The tornado returned to the ground farther northeast, with scattered tree damage along 6th avenue. Based on the assessed damage in Bay Ridge, this tornadic damage is classified as EF-2 with estimated wind speeds of 111 to 135 mph.

The tornado returned to the ground as another pocket of significant damage occurred on 58th Street between 5th and 6th Avenues. The roof was ripped off of 5 homes, and tree damage indicated strong EF-1 damage.

The tornado then headed east, and touched down for at least the fourth, but final time, in Kensington just east of the intersection of Church Avenue and Beverly Road at approximately 6:40 am. Numerous trees, approximately 30, were uprooted along Ocean Parkway as the tornado moved east. The tornado produced significant damage to trees and structures in the area with East 8th and 7th Streets being hit hard. Damage was reported as far east as Argyle Road. The tornado was on the ground for approximately 1/2 mile in this area before it lifted. 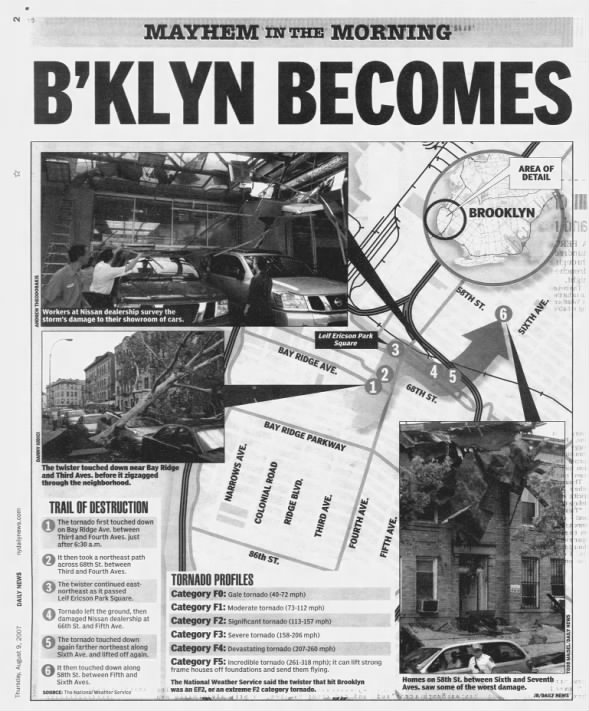 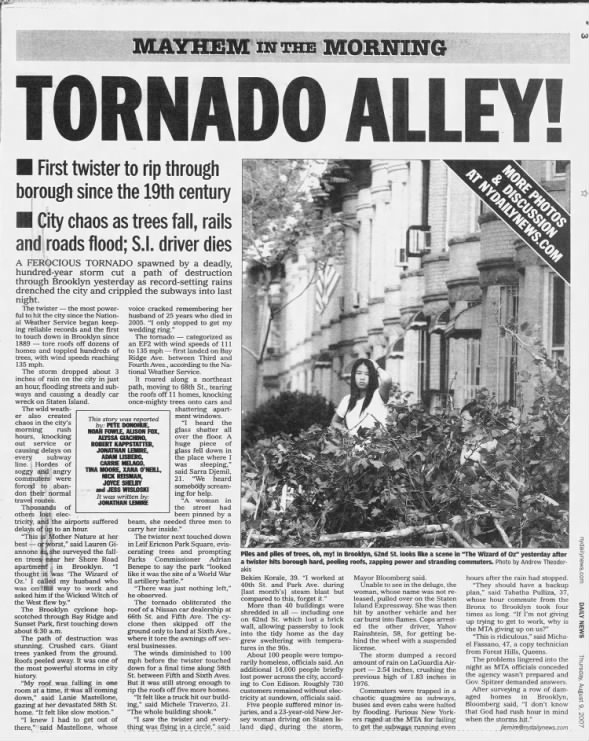 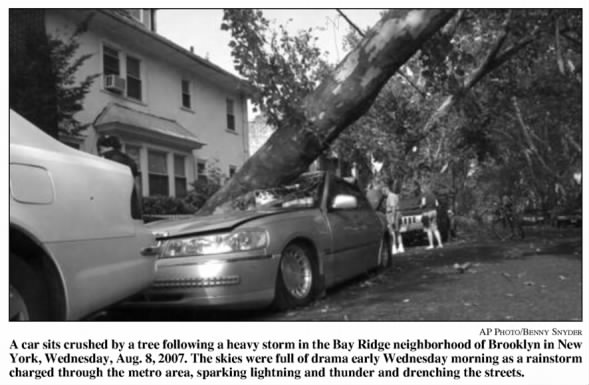