The SPC Database shows five tornadoes occurred on July 23, 1975.  Three were in the state of Illinois.  Two F3s are listed for Fulton County.  The first traveled from SW of Blyton to SE of Fiatt, causing mainly crop and farm building damage.  The second tornado devastated parts of Canton, IL.  The below map from Ted Fujita and Greg Forbes is included in Thomas Grazulis’ book Significant Tornadoes.

Fujita researched this tornado family and the influence that microbursts may have had on them.  Per Grazulis, “Professor Fujita’s mapping of the Canton tornado family shows how microbursts and/or other downburst-type winds move the tornado from side to side and may influence its intensity. Microburst m2 might have caused the break in the path.  Otherwise, the event might have been a single tornado.  Microburst m6 might have caused the tornado to intensify.  Both deaths were in that area.” (Grazulis, 1178)

Most of the damage in Canton was from downtown and south.  127 businesses in a five-block area were damaged.  Approximately 100 homes and 50 mobile homes were destroyed.  The two fatalities occurred at the Horton’s Mobile Home Manor.

Note: There was a pair of tornadoes that tracked through parts of Fulton County on this day. The first tornado caused damage to crops and some farm buildings from SW of Blyton to SE of Fiatt.

Our focus is on tornado #2, which brought significant damage to parts of Canton. Here is the Storm Data entry:

The second tornado of the pair touched down to the left of the first tornado at Fiatt. It traveled east through Canton then veered southeast before lifting about two miles northeast of Monterey.

Incredible damage occurred in the city of Canton.  One hundred twenty-seven businesses in a five-block area in the central portion of the town were damaged; some buildings were totally destroyed, others were so heavily damaged that they had to be demolished.  Residential losses were heavy: about 100 homes and 50-mile homes were destroyed; about 300 homes and 100 mobile homes were damaged.  Total losses were placed at $17-$20 million.  Two deaths occurred as the tornado ripped through the Horton’s Mobile Home Manor on the city’s east side.  Fourteen people were hospitalized, and forty-five were treated and released as a result of the tornado.

The tornado snapped utility lines to the city.  A strike by electrical workers hampered the restoration of power to the city; some areas were without power until the evening of the 28th.  All stores in the city except those selling food were required to close.  Much of the perishable food supply had to be thrown out.  Immediately after the tornado passed, the town was close to outsiders except those on official business. 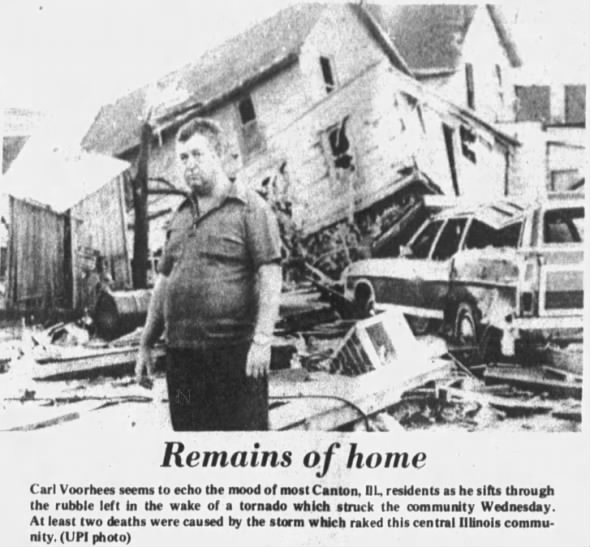 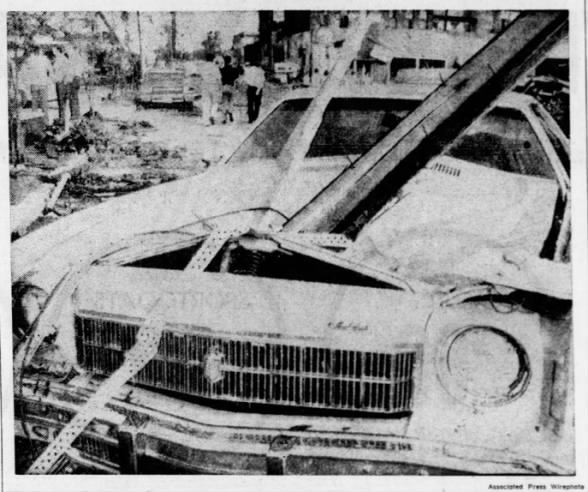 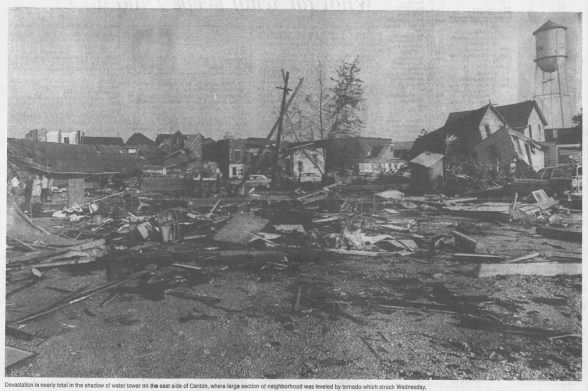 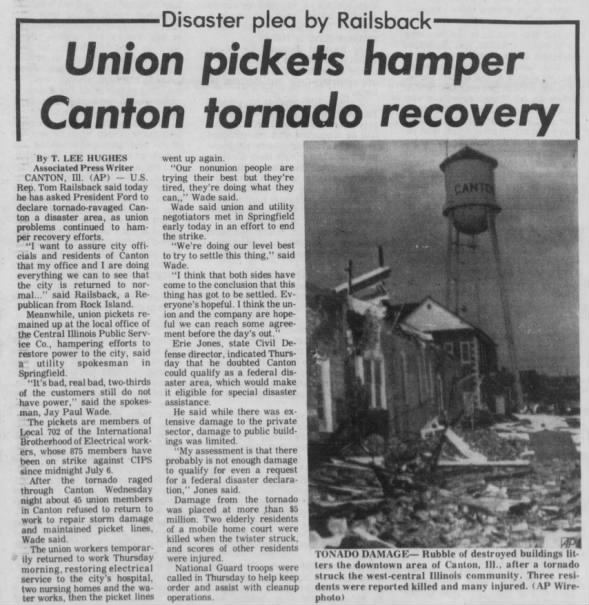 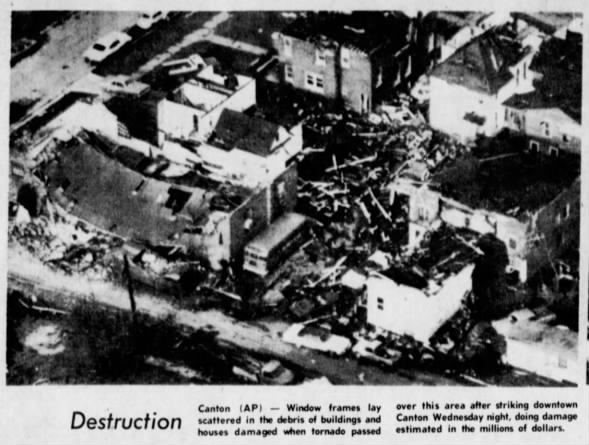 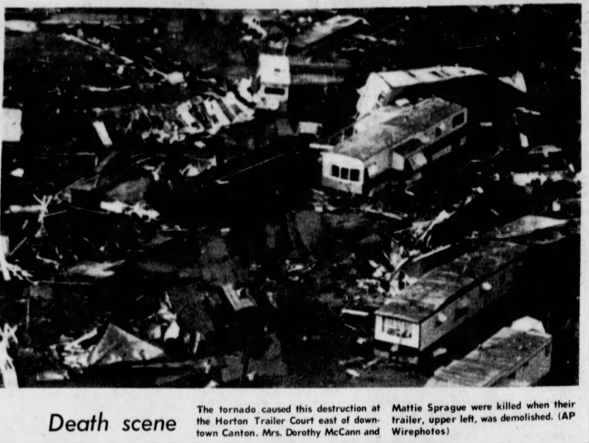 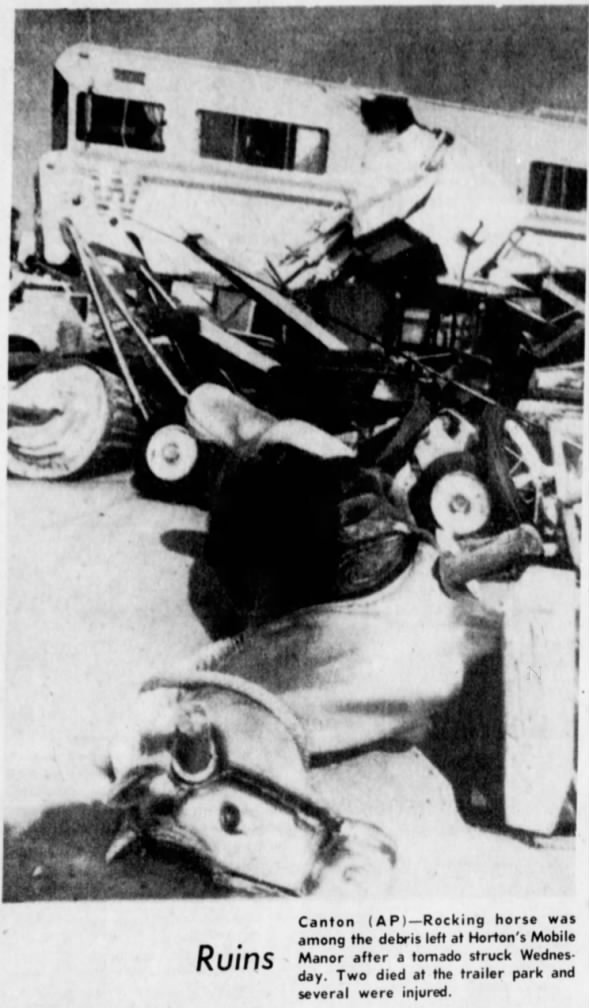 We gathered information for this event from the SPC & NCDC Databases, the July 1975 Storm Data Publication and Thomas Grazulis in Significant Tornadoes and found the following differences: