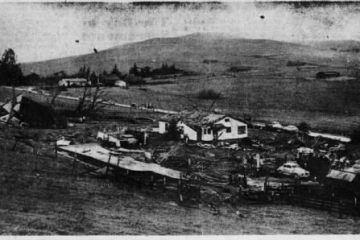 During the morning hours of January 11, 1951, a squall line pushed across the San Franciso Bay area. The storms produced millions of dollars in damage as straight-line winds and tornadoes ripped through the region. Per the Storm Prediction Center (SPC) and National Climatic Data Center (NCDC) databases, one twister occurred on this day, an F2 in Sunnyvale. Thomas Grazulis in Significant Tornadoes lists two tornadoes, the Sunnyvale F2, as well as an F2 at San Jose. Upon doing research, we were able to definitively confirm two additional tornadoes, one that moved through parts of Marin and Sonoma counties and a weak one in Contra Cosa County. It is likely that other funnels occurred, though reports in the newspapers were not detailed enough to confirm others.