This summary looks at one of the 76 tornadoes that occurred in the Veteran’s Day Weekend Tornado Outbreak of November 9-11, 2002. I retrieved the total of 76 from the NOAA Service Assessment of the event from March 2003. This was also stated in an SPC report about 2002 Tornado Fatalities. In my searching, I found a few other articles that stated the total was 83 but I couldn’t find official proof to back that up. All statistics come from the NOAA Assessment.

The outbreak began late in the afternoon of November 9 and lasted through the early AM of November 11. It is the second largest November outbreak on record over the eastern US.   There was a total of 76 fatalities.

Per the NOAA Assessment, “The Veterans Day weekend tornado outbreak covered a very large area of the eastern United States and can be described as four distinct areas or episodes of tornadic activity. The fatalities associated with the event occurred over a 25-hour period.”

The first episode occurred during the evening of Saturday, November 9 into the early AM of Sunday, November 10. 10 tornadoes developed within a cluster of supercells. 7 of the 10 occurred in the state of TN, two of which caused fatalities.  This summary explores the details of one of the Tennessee F2s. It tracked 10 miles through parts of Carroll County.

The Storm Data entry stated the tornado developed near the town of Terry and moved to the northeast. It says a mobile home park near Leach was hit and two people were killed in one of the mobile homes in the park. Three homes, two businesses and a farm building were destroyed and 40 other homes/buildings damaged.

When I started scouring newspapers looking for the mobile home park, I couldn’t find it. Newspaper articles stated the tornado hit a mobile home in the “Cedar Grove-Terry Community”. The November 11, 2002 copy of the Jackson Sun included a small map of where the storm-related fatalities occurred. Note, the map says “fatality”. A second person at the home died a few days later at the hospital. I did my best to plot this point on my track map below. This area is not near Leach and it is not clear if this was a mobile home park. The article stated that a woman was killed, “as she sat in her mobile home on Old Stage Road.”

The article also mentions damage on Tennessee 104 about 3 miles west of US 70. The SPC’s starting latitude and longitude is about 1.5 miles west of US 70 so that should be shifted west.  If you then put the ending point slightly west and go NE with the track, it will take you closer to where the damage and fatalities occurred.

The two people killed were Annette Forsyth, 65 and her son Neal, 42. They lived in a double-wide mobile home that was destroyed by the tornado. Her two other children, Ricky and Darlene were injured. 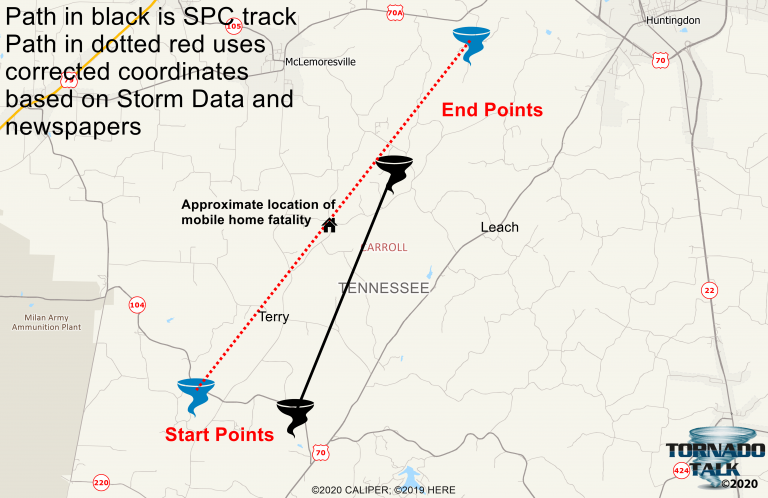 Corrected Coordinates based on Storm Data and Newspapers: 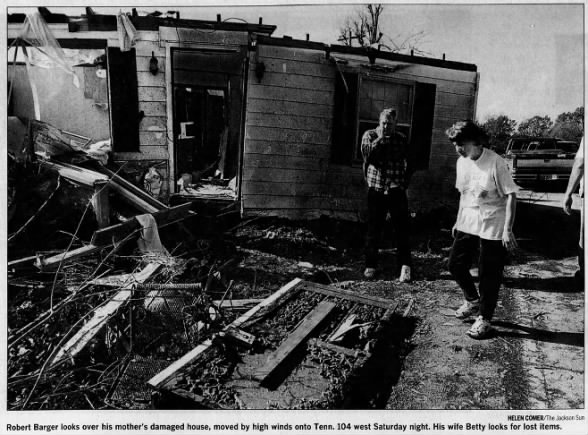 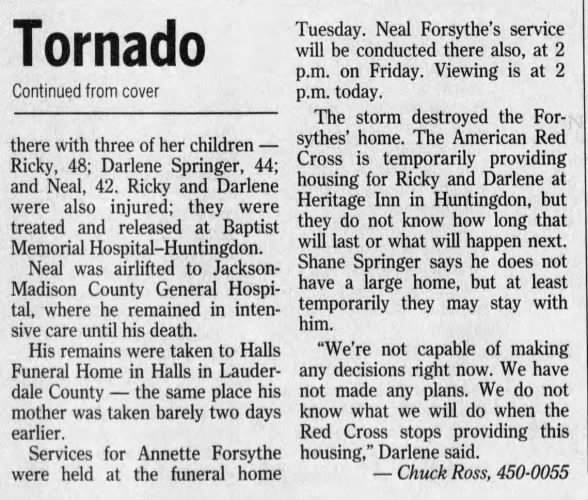