24 tornadoes were confirmed on November 5, 2017. Most were in Indiana and Ohio. There was an EF1 in Richland County, IL and an EF0 in Erie County, PA. A total of five were rated EF-2. We look at one of those in this summary. It moved almost 5 1/2 miles through parts of Mercer County, OH and the town of Celina. There were eight injuries and no fatalities. Per an article from 10tv.com, six people were injured at a restaurant, one at another business and another was hurt when a utility pole hit their car.

Damage and path details are from the NWS Wilmington summary of the event. The tornado began between Main Street and West Bank Road in Celina. Tree limbs were downed in this area. The tornado clipped Grand Lake St. Marys. Minor damage was denoted to trees and a few structures near the corner of Lake Shore Drive and Elm Grove Avenue. The twister may have moved back over a small part of Grand Lake St. Marys before crossing into the back parking lot of Wendy’s on East Market Street. A fence and a few small trees were downed in this vicinity. On Vine Street, a one-story home lost its shingles and approximately 10% of its roof.

The tornado strengthened as it pushed east on East Market Street. The Lakeshore Auto Sales completely lost its roof. On Lake Street, “several large branches were knocked down on one property, with significant debris splatter on the east-facing side of a home along with some removal of siding.

Another business on East Market Street had significant roof damage and the windows in the front of the building were broken. There was tremendous tree damage and minor roof damage to homes on the 1100 block of East Livingston Street. One of the home had a large hardwood tree knocked down onto the second floor.

An outbuilding was destroyed on Grand Lake Road. On the other side of this road, debris was wrapped around a fence. The NWS denotes the most significant damage was observed at the Crown Equipment Corporation. “A significant portion of the roof was removed, and exterior walls on the southwest side of the building also collapsed. Damage was also noted on the east-facing side of the building.” The damage was Crown Equipment was estimated to be in the EF2 range.

On Havermann Road, several businesses were damaged. The front windows were blown out of C-Town Wings and there was considerable structural damage to the Dollar General Store. Several businesses within a strip mall on Harvermann Road had their front doors blown in. The tornado ended near the 8000 block of Riley Road. 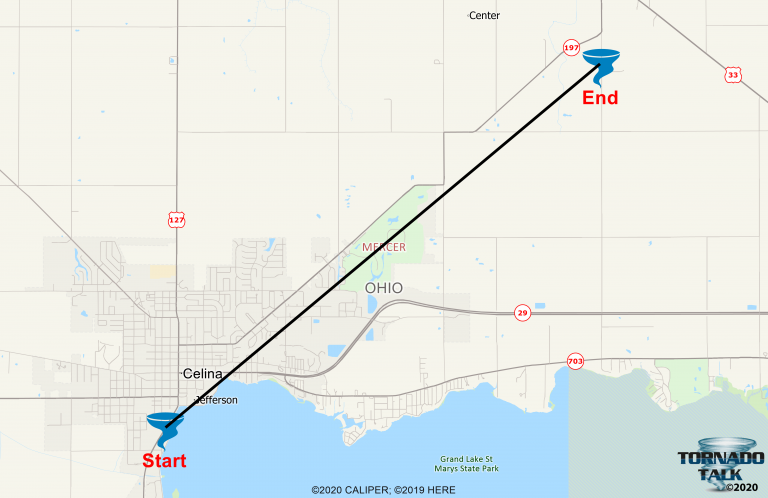 A Celina man caught a tornado on his cell phone Sunday. https://t.co/6EOGsbn9st pic.twitter.com/ZR4M9WFttm