It was deemed “The Night of the Tornadoes” – The most deadly tornado outbreak in Florida history occurred during the nighttime hours of February 22-23, 1998.  A total of seven tornadoes swept through the central parts of the state between 1055pm EST and 230am EST.  The tornadoes were unusually extreme.  Three of the seven were rated F3.  42 people were killed, and over 260 were injured.  3,000 structures were damaged, 700 destroyed.  This summary will look at all seven tornadoes in the outbreak. 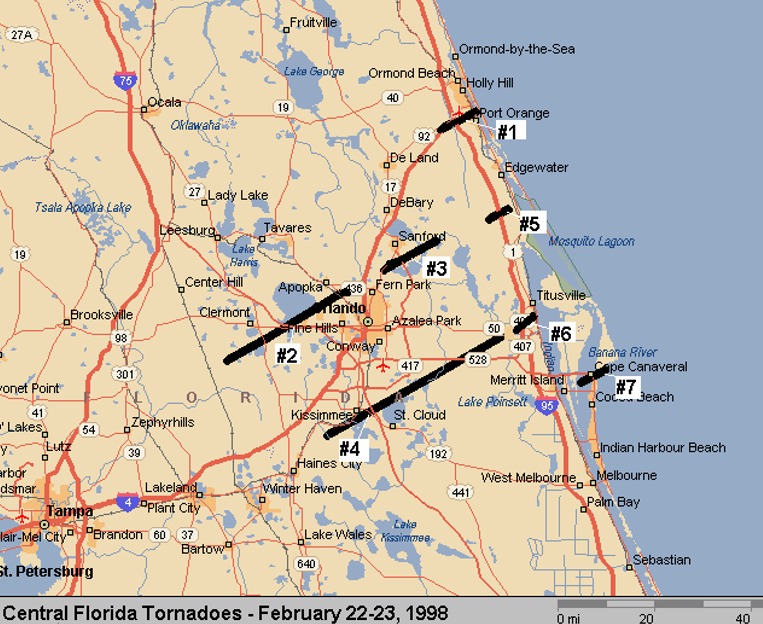 This first tornado of this outbreak developed at 1055pm EST, 5 miles SW of Daytona Beach along Route 92.  It moved to the northeast for 8 miles, moving over the junction of I-95 and I-4.  It lifted in the south part of Daytona Beach, west of the Intracoastal Waterway.  600 structures were damaged/destroyed.  One person was killed in a mobile home, and three others were injured.

The second tornado of the outbreak was the first given an F3 rating.  It developed in Lake County at 11:37 pm EST east of Lake Louisa along Highway 27.  It moved to the northeast. Most of the damage was to trees.  There was little property damage in this area.  The tornado tracked from Lake into Orange County 5 miles SW of Winter Garden.  The forward speed was estimated at 45 mph.  Max winds were estimated at 200 mph.  A mobile home community was destroyed in Winter Garden.  Three people were killed, and 70 were injured.  500 structures were damaged/destroyed.

The same supercell that spawned the Winter Garden tornado produced another F3.  It developed near Longwood in Seminole county at 12:10 am.  This tornado also moved to the northeast at 45mph.  It passed through several neighborhoods in the SE part of Sanford.  12 people were killed in mobile homes, and 70 were injured.  The tornado crossed into Volusia County near Highway 46 and the St. John’s River.  A 53-year-old man was killed in a recreational vehicle at a fish camp.  This tornado dissipated in the rural part of south Volusia County.  A total of 625 structures (mainly in Seminole County) were damaged/destroyed.

This tornado was the deadliest of the outbreak.  It also had the longest path length.  This F3 developed 1 mile south of Intercession City in Osceola County.  It moved to the northeast at 45 mph, passing through the town of Kissimmee.  The Morningside Acres Mobile Home community and the Ponderosa Recreational Vehicle Park were devastated.  The Storm Data entry lists 24 fatalities: 8 people were killed in recreational vehicles, 15 in mobile homes, and one in an automobile.  The SPC database and the NOAA Assessment have 25 fatalities.  The tornado moved into Orange County, passing SE of the Orlando International Airport.  The tornado moved through a rural, swampy area.  A few structures were hit on the shores of Lake Hart and Lake Mary Jane.  The tornado dissipated in the Tosohatchee State Preserve.  1000+ structures were damaged/destroyed (mainly in Osceola County).

This tornado was spawned by the same supercell that produced the Sanford tornado.  It developed just west of I-95, about 5 miles west of Oak Hill.  Trees were blown down.  Two barns were destroyed.  10 mobile homes and two other houses were damaged.  It lifted near Ariel at US Highway 1.

The last two tornadoes were both rated F1 and had short paths in Brevard County.

Tornado #6 developed just east of I-95, about 3 miles NW of Titusville Cocoa Airport.  It came from the same supercell as the Kissimmee tornado.  It had a path of only 1 mile.  There were downed trees, and four homes were damaged.  There were no injuries or fatalities.  It was rated F1.

Tornado #7 was a waterspout/tornado that moved onshore at Port Canaveral from the Banana River Lagoon.  It was rated F1.  30 structures were damaged along its 1-mile path.  It lifted over the Atlantic Ocean. 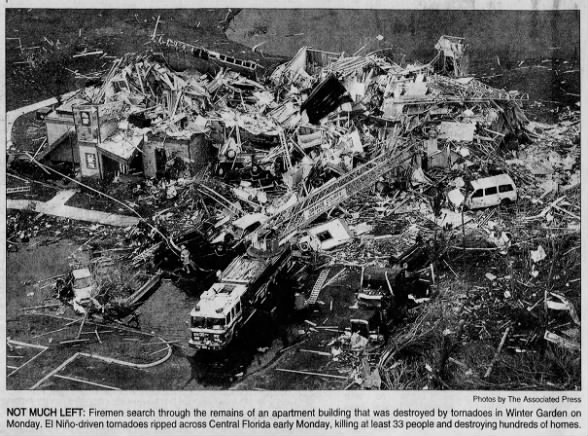 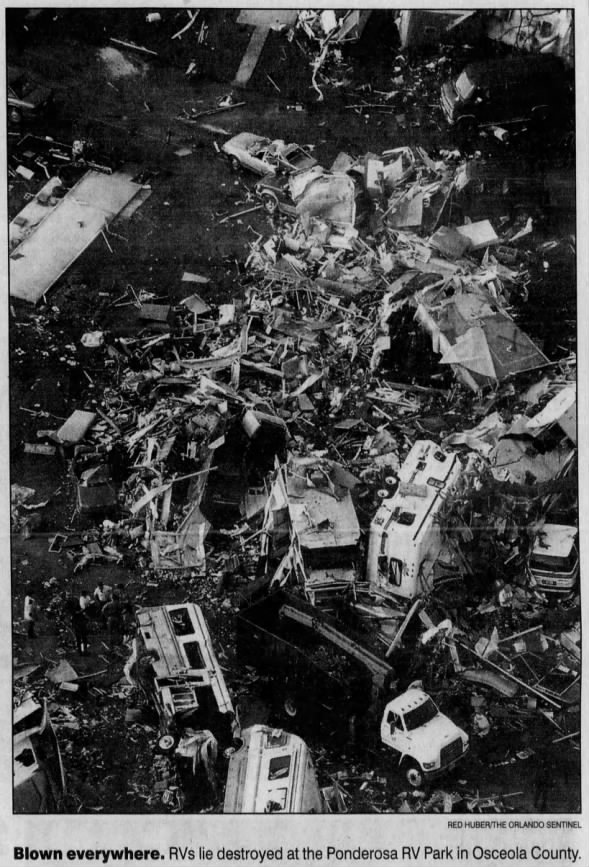 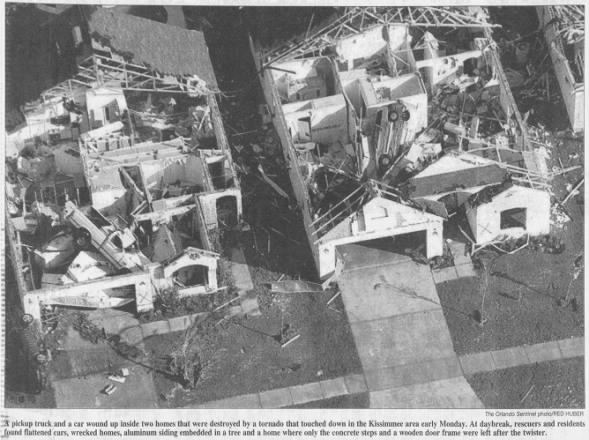 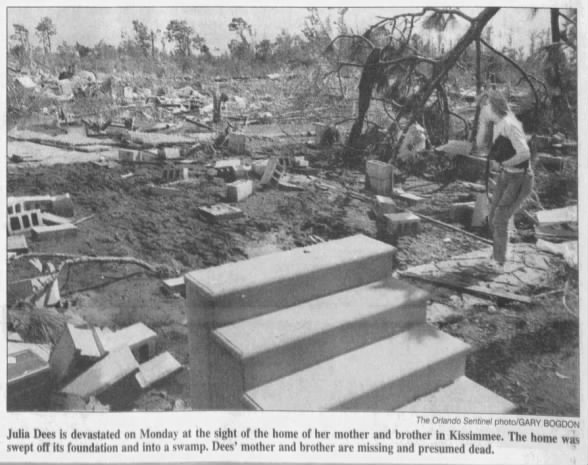 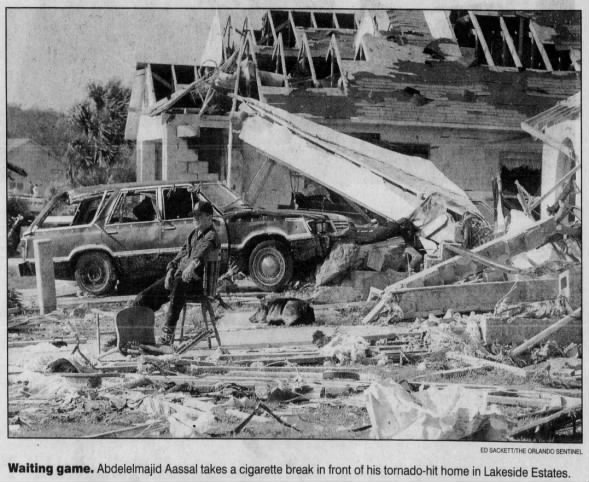 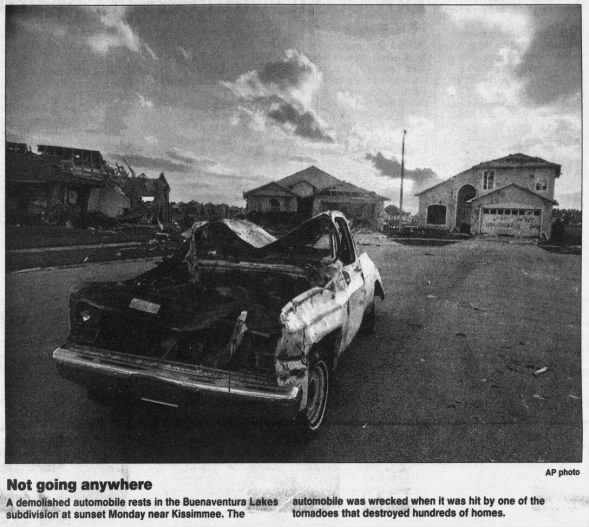 NOAA Assessment of the Event

SPC Overview of the 1998 Tornadoes