The first F5 is this subject of this summary.  It was more than likely a part of a family of tornadoes that covered 65 miles through parts of Franklin, Butler, Floyd, Chickasaw and Howard Counties.  Per the Storm Data Entry, a tornado was observed to lift near Marble Rock and then a continuous tornado path was found from east of Marble Rock to Charles City. This would indicate more than one tornado.

Thomas Grazulis in Significant Tornadoes includes a picture of a tornado near Marble Rock.  The man who took the photograph (and who also lost his farmhouse) insists this tornado dissipated and was not the same tornado that hit Charles City.

The Charles City F5 went straight through downtown just before 5pm CDT. 13 people were killed and over 450 injured.  The NWS in La Crosse has some amazing personal accounts from this event.  Here is one I wanted to share. They are a part of the 1968 Charles City Tornado Blog by The Charles City Press.  You can view them all here!

At the age of 25, Jim Hilgendorf plunged right into the middle of the carnage that followed the tornado. As a member of an ambulance crew, Hilgendorf and Wes Banks were out on a call when the tornado was bearing down on Charles City. They got to a basement before the twister passed through, but when they re-emerged they had work to do. Hilgendorf and Banks drove the ambulance down Gilbert Street until they reached the courthouse.”We looked across (the river) and it was a war zone,” Hilgendorf recalled. The ambulance crew maneuvered their vehicle across the river to offer aid. “We picked up our first person right about where City Hall is now,” Hilgendorf said. “We picked up a lot more than one person.” To get from the downtown area to the hospital, they had to cut across yards to avoid downed trees and power lines. While at the hospital, things were thrown into a frenzy.”I saw one guy who was brought in on a door,” Hilgendorf remembered. That night, Hilgendorf and Banks worked about 4-5 extra hours, and dealt with a variety of injuries. “We had some pretty bad ones,” he said. The tornado did put a strain on the town’s medical resources, but Hilgendorf cited an impressive volunteer effort that kept emergency services operational. “You couldn’t believe the help that poured into this town, it was really something.”

The second F5 of the outbreak began while the first was hitting Charles City. It traveled just over 13 miles in Fayette County.  Read about that event here!

Tornado first sighted passing over a farmstead northeast of Hansell.  It moved over east edge of Aredale.  Two funnels were simultaneously sighted at Aredale.  A funnel was observed to lift near Marble Rock.  A continuous tornado path and associated tornado sightings were reported from east of Marble Rock to Charles City.  The northeastward path of the tornado became northward as it swept through downtown Charles City at 3:47 pm and then recurving as it left Charles City to move northeast to Elma, passing northward across Elma and thence moving north-northeast to Highway 9 and finally north and northwest as it dissipated south of Chester.

The greatest losses were in Charles City where 13 persons were killed, 450 injured of which 74 were hospitalized.  337 homes were completely destroyed and 1565 families in Charles City were affected by the tornado. Losses were estimated up to 30 million dollars.  In Elma, 12 persons were injured, 3 hospitalized and damage estimated at $1.5 million dollars. Additionally many farmsteads and rural homes were damaged or destroyed. The tornado entered Elma at 4:25 pm and continued to a point 14 miles north of Elma where its destructive path ended. 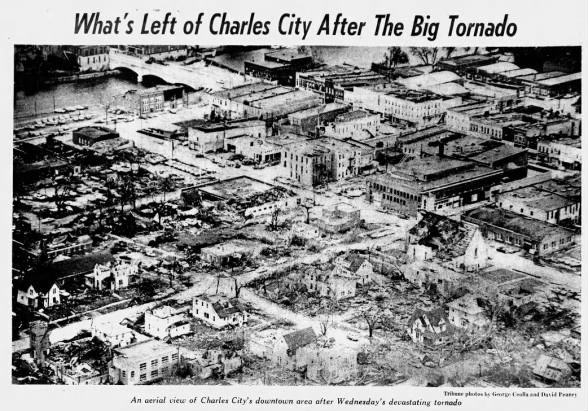 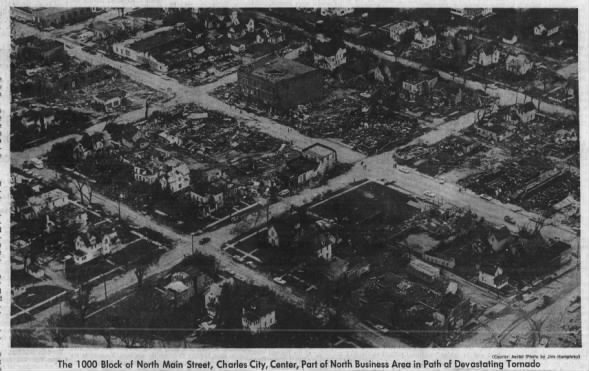 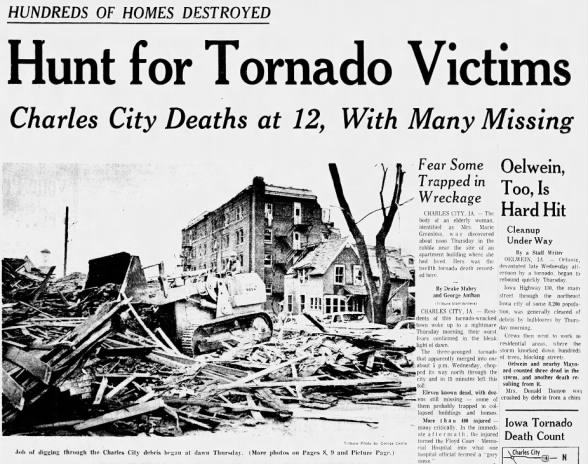 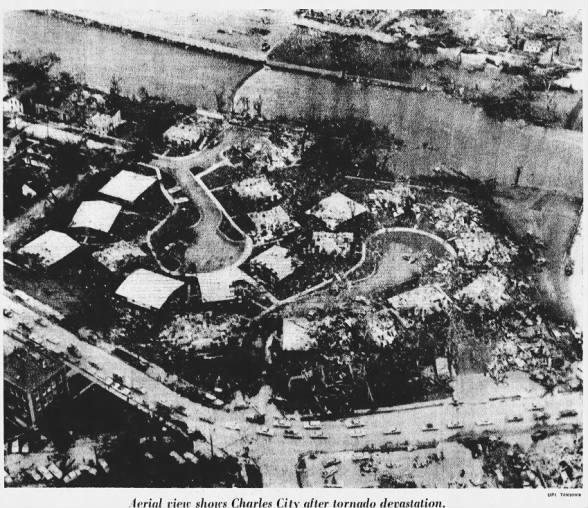 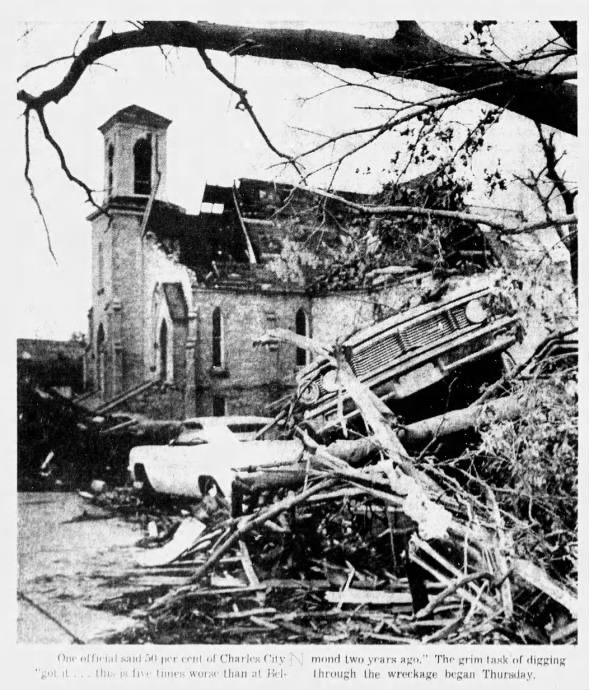 We gathered information for this event from the SPC & NCDC Databases, the May 1968 Storm Data Publication and Thomas Grazulis in Significant Tornadoes and found the following differences: