It is considered the most destructive tornado in Wyoming’s history and it was the first tornado to ever hit the city of Cheyenne. An F3 crossed through the northern parts of the Cheyenne housing and airport areas. Per the NWS Cheyenne, “It thoroughly demonstrated the destructive capability of a tornado occurring along the front range of the Rocky Mountains.”

United States of America: "A tornado blasts through a mobile-home park near Cheyenne, Wyoming. Watching from a quarter mile away, Peter Willing took this photograph just before rushing to his basement; he lived to tell the story." from r/natureismetal

Thomas Grazulis in Significant Tornadoes states this could have been a “minimal F4” tornado. And in a paper entitled, “The Cheyenne Tornado of 16 July 1979”, an F4 rating was assigned. We could not find evidence of why the official rating was downgraded.

The paper was co-authored by William T. Parker and Richard D. Hickey of the NWS in Cheyenne. It was published in May of 1980. They outline in detail the atmospheric conditions, tornado descriptions and damage surrounding this event. They based their F4 rating on the Fujita-Pearson Scale (FPP). Most are familiar with Dr. Fujita’s scale to rate tornadoes by wind speed. Originally, there was an added scale for path length and wind speed. This scale was created by Allen Pearson, former director of the National Severe Storms Forecast Center (NSSFC).

The table below, extracted from Significant Tornadoes, shows the parameters for the FPP Scale: 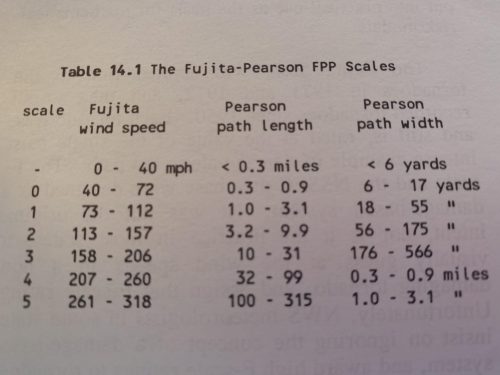 Per the NWS Cheyenne paper, the F, P, P rating for this historic event was 4, 2, 2.  It was a ‘4’ on the Fujita Intensity Scale. Per the paper, the path length was 6.7 miles; that lands in the 2 range for the Pearson Path Length Scale. The width was 80 yards: A ‘2’ on the Pearson Path Width Scale.

According to Parker-Hickey, “F4 damage was found in a portion of the Buffalo Ridge housing area where large two-story single family houses were reduced to foundations surrounded and covered by debris. Fujita and Pearson also indicated that F4 damage would result from tangential wind speeds of 92-117 m/s (200-250 mph).”

This tornado developed along an outflow boundary from previous thunderstorms that were moving south across Western Nebraska. There was abundant moisture in place and low level wind shear.

The tornado was first seen as a “dust devil” near the intersection of Vandehei Ave and Valley View Road. Another eyewitness in that area saw a 30-meter wide “dust devil” moving southeastward toward the State Game and Fish Buildings. Just west of the Fish and Game buildings, power lines and transformers were knocked down and two vehicles were overturned in the parking lot, with windows blown out of several others.

Crossing Interstate 25, the tornado flipped a southbound truck and knocked down road signs. The tornado then began to turn slowly eastward, and crossed the yard of the Governor’s Mansion, severing the main powerline. It hit the Airport Golf Course, where it snapped off branches and treetops. An off duty National Weather Service employee saw it as it was over the golf course and described it as “wispy and multi-stranded” indicating that there may have been suction vortices.

The tornado passed across the northern portion of the airport a little more than a half-mile north of the Cheyenne NWS office. Two C130 aircraft, weighing 77 tons each, were “tossed around like toys”, and extensively damaged. Two other C130s were heavily damaged when the hangers they were in were destroyed. Also, an aircraft was seen flying over the hangars with no pilot aboard.

It then moved through the Nimmo Addition, where about 35 single-story
homes were heavily damaged or destroyed. In this area, entire roofs were seen lifted about 100 feet into the air then crashing down about 170 yards away. The tornado then slammed into the Buffalo Ridge neighborhood where it reached F4 intensity. In Buffalo Ridge, it encountered “very new” and large two-story homes. 100 homes were destroyed and 200 others were damaged. Several of these homes were leveled to the ground. Fortunately only a few minor injures occurred here. The Buffalo Ridge school was heavily damaged, as well.

After striking Buffalo Ridge, the tornado moved across largely open country, where it heavily damaged three more houses. It then struck the Shannon Heights Trailer Park. It was here that a 14-month-old boy, David McKinnon was killed. He was thrown 100 feet from his destroyed trailer. 17 trailers, seven of which were well anchored, where leveled. Frames were left twisted and strewn over a large area, two frames were found over 400 yards east of their original locations. The paper from the NWS denotes “the path width of F4 damage across the trailer park was 220m”.

140 homes were destroyed, 100 had major damage and another 225 had minor to moderate damage. 17 trailers all in the Shannon Heights Trailer park were destroyed. 53 apartments in Buffalo Ridge were damaged to some degree. Total damage from the tornado was estimated to be $40 million (1979 dollars). 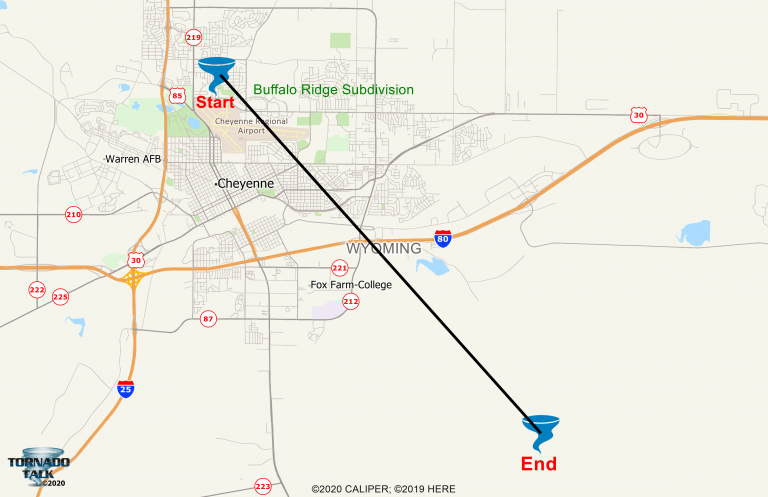 Coordinates are not correct.  The tornado moved SE and then East.  See other maps below this one from the NWS Cheyenne. 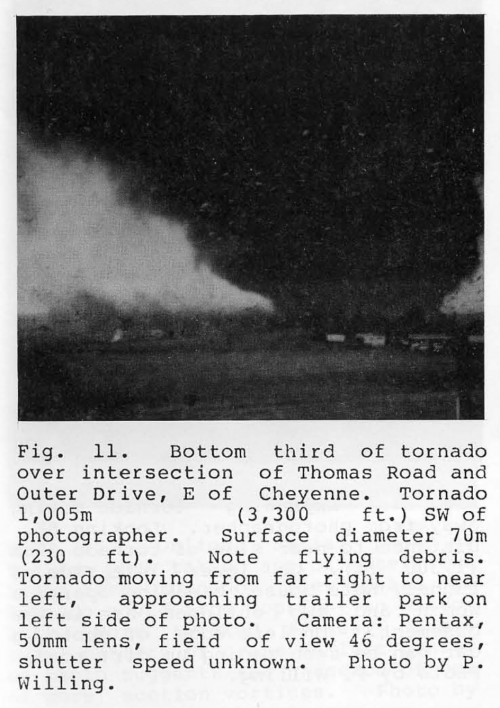 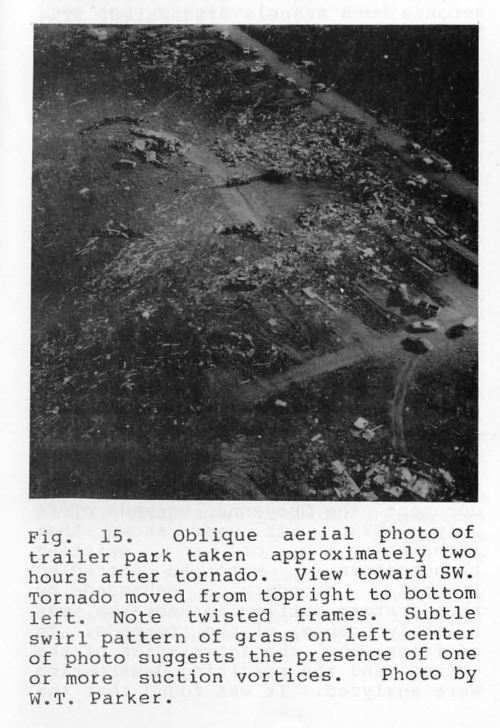 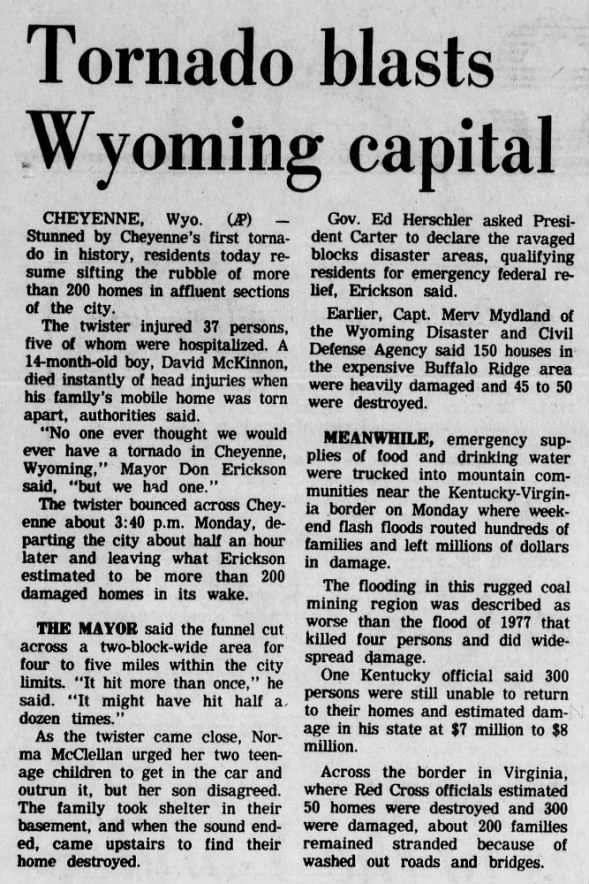 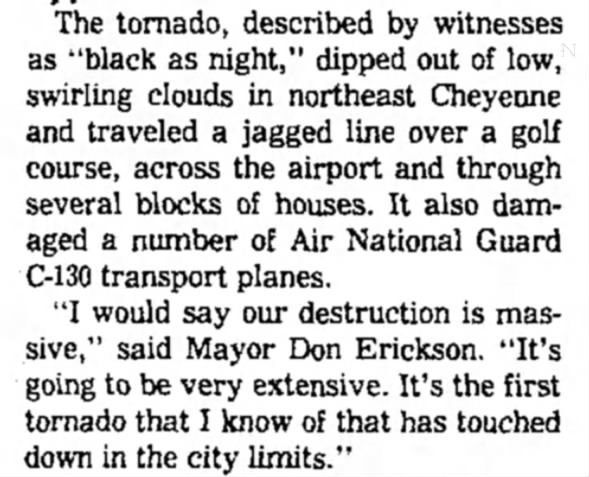 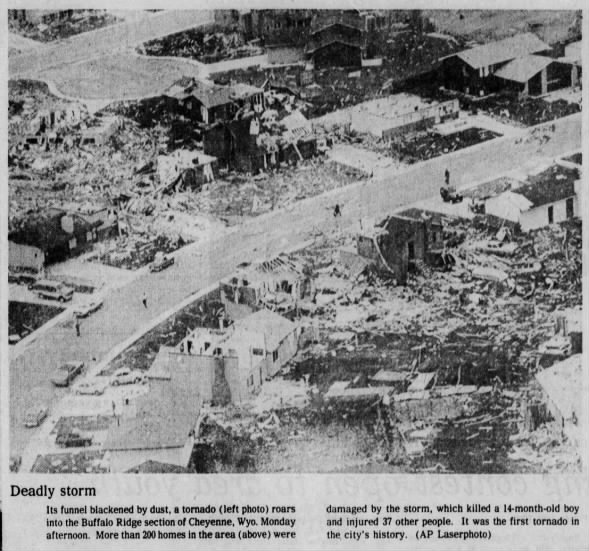 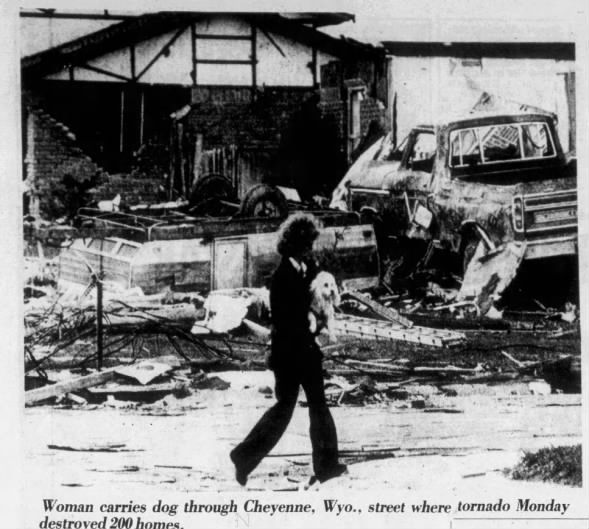 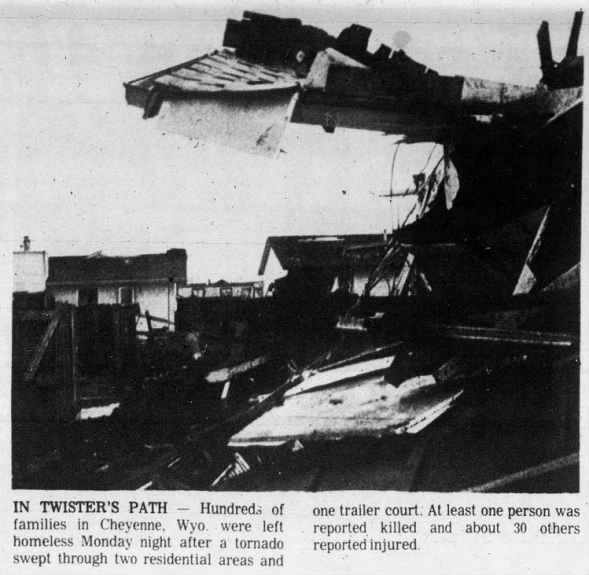 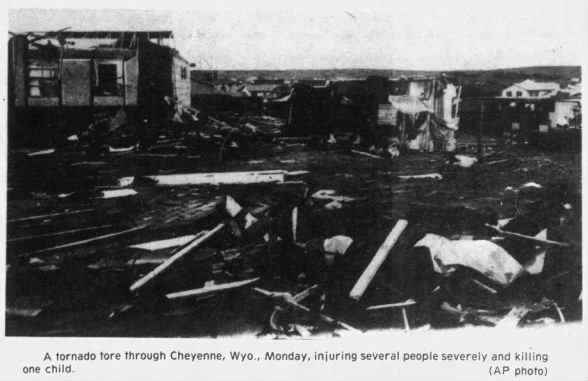 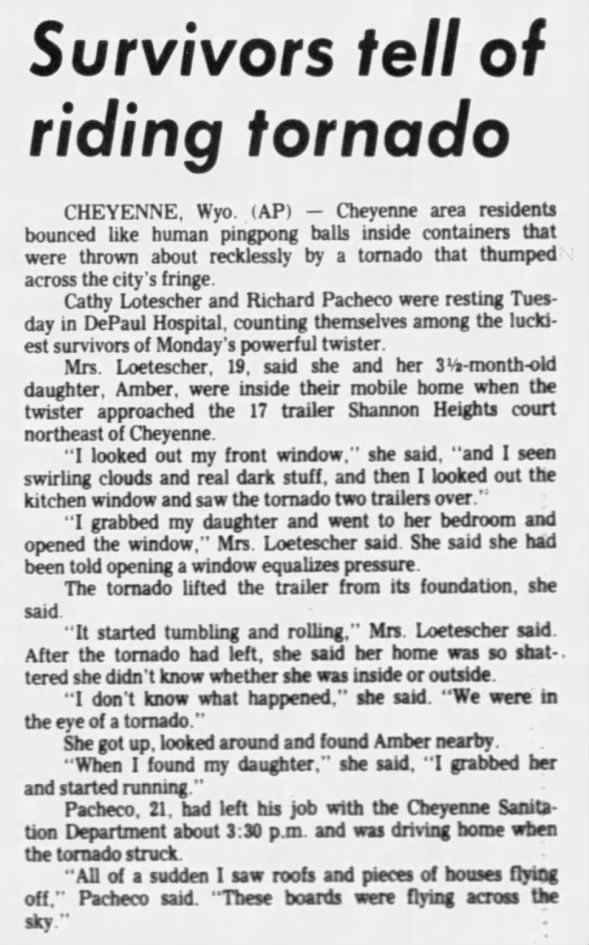 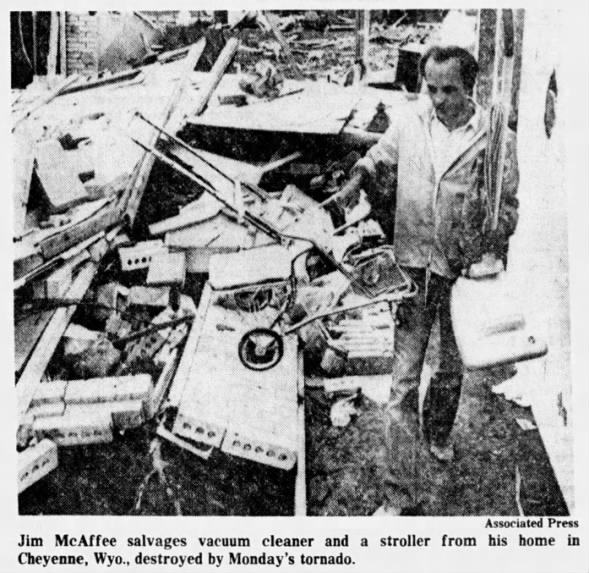 We gathered information for this event from the SPC & NCDC Databases, the July 1979 Storm Data Publication, The Cheyenne Tornado of 16 July 1979 by Parker/Hickey from the NWS Cheyenne and Thomas Grazulis in Significant Tornadoes and found the following differences: