A total of 17 tornadoes occurred on November 15, 1989.  Five were in the state of Georgia.  This summary looks at a tornado officially rated F3 that crossed through parts of Habersham County.  Thomas Grazulis in Significant Tornadoes gave this tornado an F2 rating.

This twister developed west of Clarkesville near the intersection of GA Highways 17 and 105.  Per the Storm Data Entry, winds were estimated to be greater than 150 mph.  Max winds reached within ten feet of ground level. The worst damage was in the Stone Pile community 4 miles NW of Clarkesville.  The second stories of several homes were “totally removed”. Six homes were destroyed.  Seventeen chicken houses on a poultry farm were leveled and approximately 250,000 birds were killed.  The tornado dissipated at the mountain ridge 7 miles WSW of Tallulah Falls.

Details for this event come from the Storm Data Entry.  I only found one small mention of this tornado on newspaper.com. 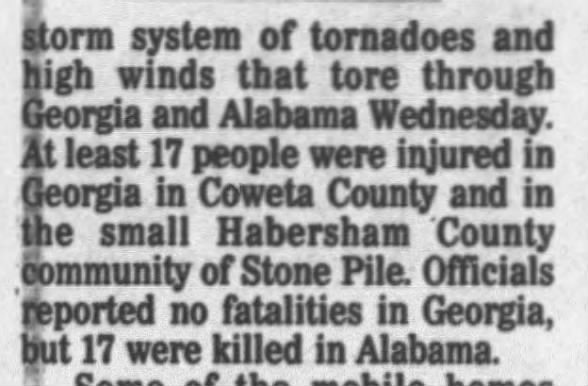 A tornado developed over rural areas west of Clarkesville near the intersection of Georgia Highways 17 and 105.  The tornado moved over farmland, with winds estimated to be greater than 150 miles an hour.  The tornado’s maximum winds reached within ten feet of ground level, and did considerable property damage along the way.  The worst damage occurred in the Stonepile community about five miles northwest of Clarkesville.  There, the second stories of houses were totally removed and the lower brick walls were devastated as the tornado traveled northeast.  Six homes were destroyed, six other homers were heavily damaged, and three mobile homes were flattened.  The tornado leveled seventeen chicken houses on a poultry farm and killed approximately 250,000 birds.  Debris from the tornado was strewn for miles.  Considerable property damage occurred in the New Liberty area.  The tornado continue dot the Habersham-Rabun County line, causing mainly tree damage, before it dissipated at the mountain ridge seven miles west-southwest of Tallulah Falls.  The property damage costs were estimated near $1,000,000.

We gathered information for this event from the SPC & NCDC Databases, the November 1989 Storm Data Publication and Thomas Grazulis in Significant Tornadoes and found the following differences:

Did you enjoy reading about this event?  Help us create MORE summaries like this one by becoming a Patreon Supporter!