Today’s tornado event may or may NOT have been a tornado event.  This was another head-scratcher as there are some discrepancies in the record. The Storm Data entry states a “squall-line thunderstorm” moved over the Cleveland area.  It then states that, “a funnel dipped to roof level in the vicinity of Detroit Ave and West 92nd Street.”  So, we apparently have a funnel that had not completely reached the ground but there was damage. Storm Data then indicates tornado damage near Shaker Heights with one house losing its roof and trees being uprooted.

Thomas Grazulis in Significant Tornadoes generalizes the information found in Storm Data but also makes this comment, “this may have only been a microburst event.”  Harold N. Burke, chief US Weather Bureau forecast at Hopkins Airport was quoted in several newspapers as saying there was a tornado that hit.  He told United Press International that more serious tornadoes “touch the ground” but this storm “probably was a tornado aloft.” That statement jives some with what the Weather Bureau eventually concluded and put in their Storm Data Narrative.

It would appear that we had perhaps a squall line with brief tornadoes along it.  There may have been more than one but it is recorded as one tornado.  If we are to say this was one tornado, then the SPC path is wrong.  They have it listed at 1/2 mile.  Yet, Storm Data lists damage from Detroit Ave and 92nd Street east to near Shaker Heights.  That is over 10 miles.  Grazulis does have a 10 mile path.

They also list damage from Fairmont Reservoir to Warrensville Center Road. You will see in a map below that that stretches north of Shaker Heights.  If we have one tornado here, I am not sure how it traveled.  The damage points are sporadic.  So we could have had multiple funnels? or a mix of a funnel and straight line wind damage?

There are also discrepancies in the fatality and injury count.  Three men died as a large water tower was blown down at a factory.  This occurred near the start of the path.  A man was electrocuted on contact with a live wire. Grazulis does not include that fatality in the record with this tornado event. He also lists 10 fewer injuries than SPC.

As a squall-line thunderstorm passed eastward over the Cleveland area, a funnel dipped to roof level in the vicinity of Detroit Ave. and West 92nd Streeet.  In an area some 6 blocks long and 2 blocks wide there was considerable damage to roofs, trees, etc.  Most severe damage occurred as a large water tower atop a 5-story factory was toppled on the roof and crashed through the 5 floors to ground level.  3 employees were killed and at least 4 others injured.  Cyclonic wind motion was definitely established.

As the thunderstorm proceeded over great Cleveland minor damage was reported until it reached Shaker Heights.  There tornadic action apparently resumed.  At least one house was unroofed, and many trees uprooted along a path from near Fairmont Reservoir to Warrensville Center Road.  Utility lines were downed and one man was electrocuted on contact with a live wire.

The second map shows a plot of the damage points mentioned in Storm Data   I have mapped a starting point near Detroit Ave and West 92nd Street.  They also mentioned damage near Shaker Heights and near Fairmont Reservoir to Warrensville Center Road.  I plotted those points.  The distance between the starting point and near Warrensville Center Road is just over 10 miles.  This is what Grazulis has in Significant Tornadoes as the path length of this tornado.  It is not clear what the storm direction should be since the ending points are more spread out. 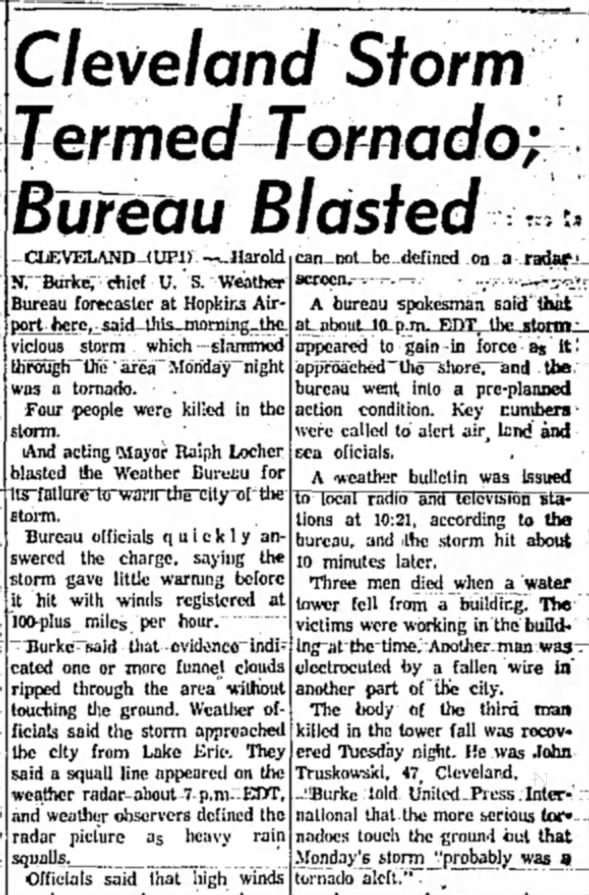 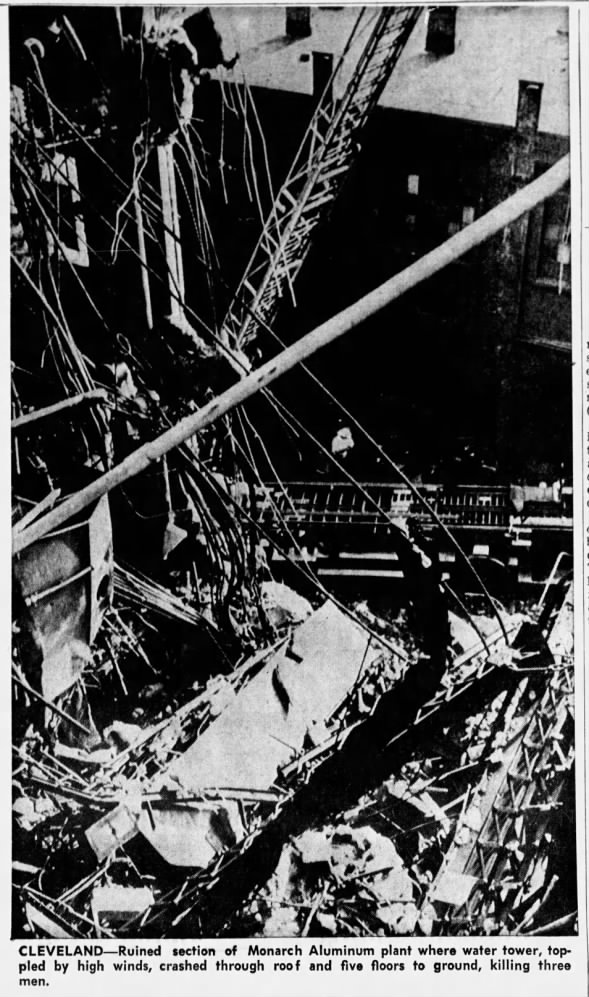 We gathered information for this event from the SPC & NCDC Databases, the August 1962 Storm Data Publication and Thomas Grazulis in Significant Tornadoes and found the following differences: