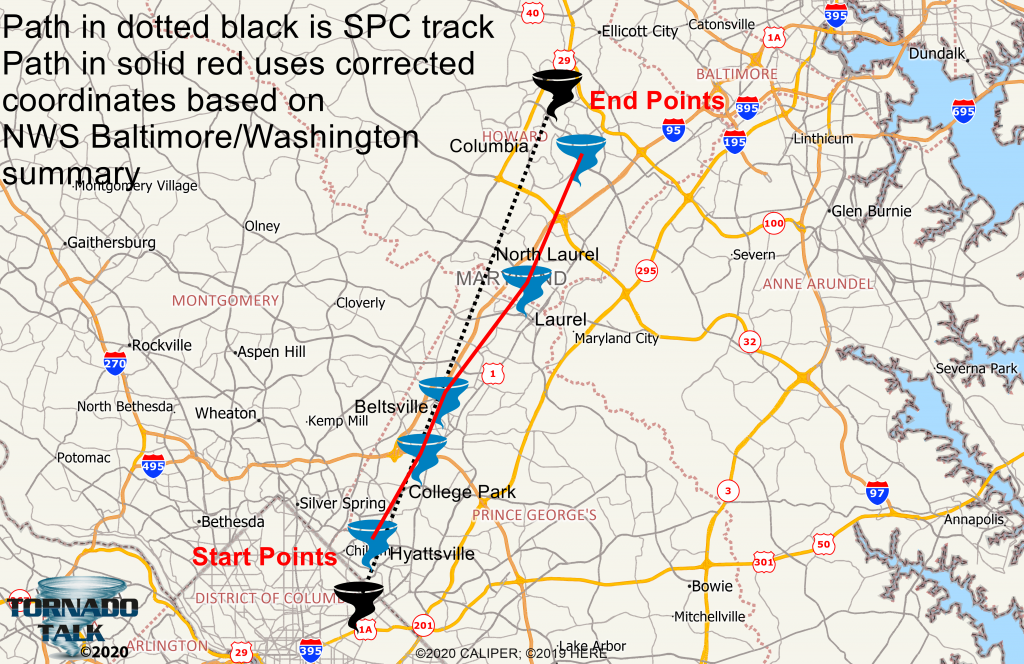 A total of nine tornadoes were confirmed on September 24, 2001 across parts of the Mid-Atlantic and the Northeast. There was an F4 in Culpeper and Fauquier Counties in Virginia, and you can find a detailed summary about that event here. This summary though looks at another significant tornado that day. It moved through Princes George’s and Howard Counties in Maryland and hit parts of the University of Maryland Campus, resulting in two fatalities.

The twister began about 1.5 miles NW of downtown Hyattsville, MD, in the Northwest Branch Stream Valley Park. Spotty tree damage occurred as the funnel moved north-northeast toward the University of Maryland.

It swept across the western section of the school in College Park. Soccer goalposts were twisted and thrown at Ludwig Field. Player benches were ripped apart, and the tents used for the teams at halftime were blown away. The neighboring President’s Mansion was damaged when trees fell onto it.

Just 200 yards north of the President’s Mansion sat the Maryland Fire and Rescue Institute (MFRI), a disaster response training center. The MFRI consisted of a sizeable triple-wide trailer and nine portable office trailers. The entire complex was obliterated. Debris, including videotapes and sheet metal, was found up to 60 miles away in northern Harford County, MD, and southern York County, PA. Steven Edwards, the institute’s director, was quoted in the September 26, 2001, Baltimore Sun: “We train people to handle these emergencies, and to have it happen to you gives you a startling perspective.”

Ann Davidson, her daughter Imogen, and Assistant Director of the MFRI Pat Marlatt were inside the main building when the twister struck. Imogen was working on a project after school using her mom’s internet connection in the office. They all felt a sudden pressure drop and looked outside to see debris flying by. The crew ducked under desks. Ann clung to the carpet, her legs were pulled upward, and she was cut by flying debris. Imogen had a few scrapes and bruises. Pat was trapped under the rubble for several hours and had severe lacerations to his head.

Another person, Toby, was inside a trailer that housed the photocopying machine. He was thrown 80 yards across the parking lot when the trailer was leveled. His dog, Muffin, was beside him when the twister hit but sadly was never found. The photocopier landed 50 yards away. Eight MFRI vehicles were totaled in the parking lot. Nearby trees were stripped and partially debarked. 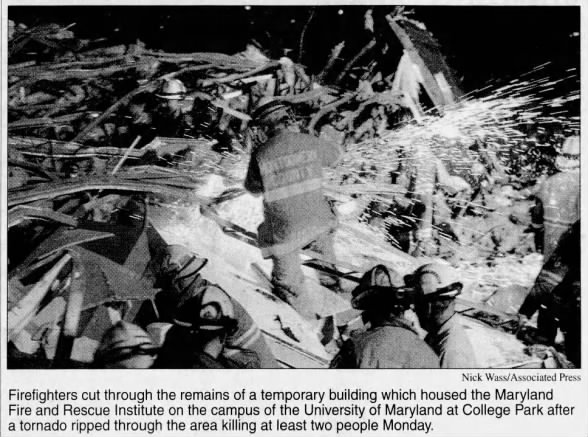 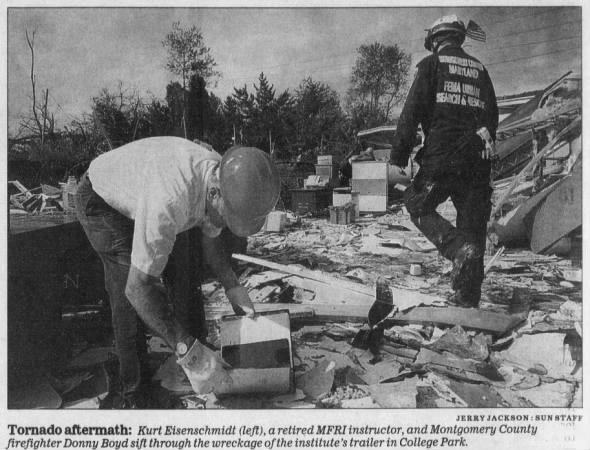 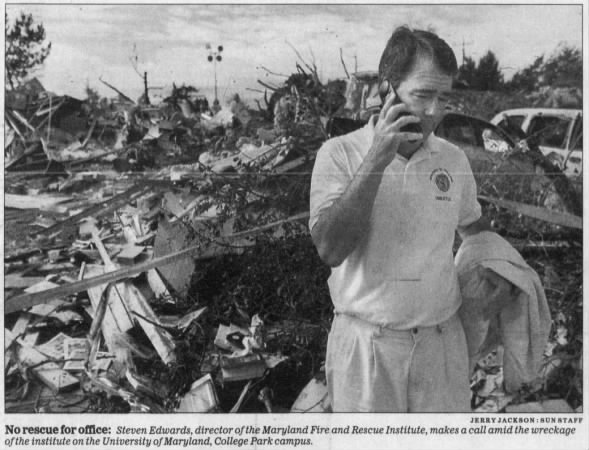 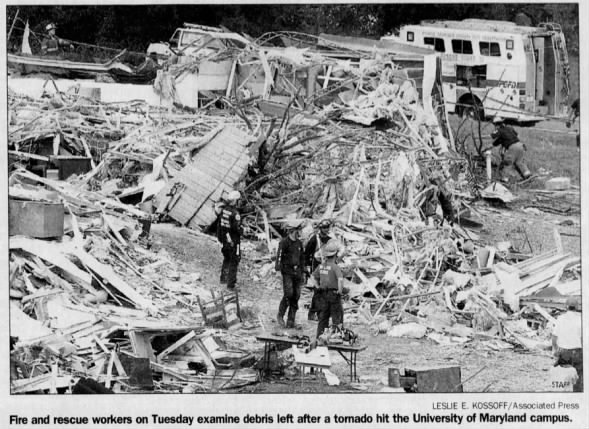 Pat Marlatt’s daughters, Colleen, and Erin visited him after their classes and left just before the tornado hit. Erin was a sophomore sociology major; she had brain surgery in January of 2001 and had to take the spring semester off. So, she had just started back to the University of Maryland. Colleen was a senior environmental science and communications major. Their 1992 Mercury Sable was lifted and thrown over or around Denton Hall and was found in a wooded area 300 yards away. Tragically, the two sisters were killed instantly when their car hit the ground. 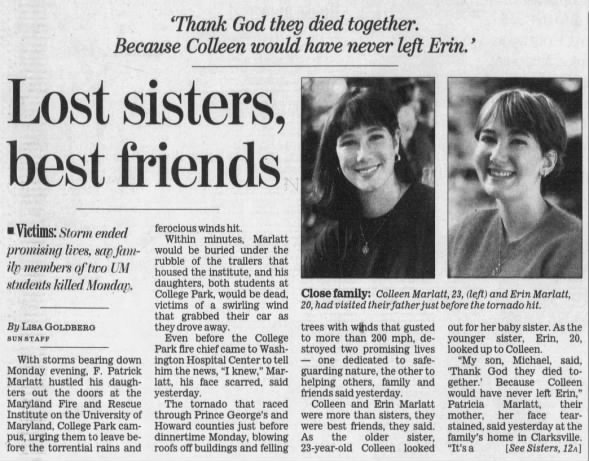 Next door to the MRFI, the roof was damaged on the newly built Clarice Smith Performing Arts Center. Adjacent to the arts center was Byrd Field football stadium. Damage was relatively minor at the stadium, with a few seats torn off and signs shattered. The nearby indoor football field was destroyed when the “bubble” structure was blown away.

The funnel then enveloped Denton Hall. Freshman Justin Fenton was in his seventh-floor dorm room when his window fan was sucked out. With now a clear view of the outside, he saw the tornado coming his way. Justin’s mind flashed back to the 9/11 attacks that occurred two weeks prior, and he was scared that the building would crash down. He ran into the hallway with a group of other people until the storm passed. Michelle Thomas had been awakened from her afternoon nap when someone knocked on the door to warn her. She looked out the window and watched the tornado approach. She left the room for shelter, but upon returning, found a mess. Her windows were blown out, posters were shredded, and debris was strewed about. When Michelle moved out in the spring, she was still finding pieces of glass. According to the Diamondback News, Michelle suffered PTSD from the storm, and 20 years later, she is still struggling when there are storms.

Easton Hall was also hard hit. Parts of the roof were removed, and windows were smashed. At least 3,000 students between the two dorms had to be relocated. At the North Woods Buffet Dining Hall, all windows were busted, and neon signs were destroyed. The building was estimated to be closed for repairs for six to eight weeks.

At Parking Lot 2, directly behind the dorms and dining hall, 200 cars were tossed about and heavily damaged. Some vehicles were found 200 yards away in a wooded area, and one was even partially ripped apart. 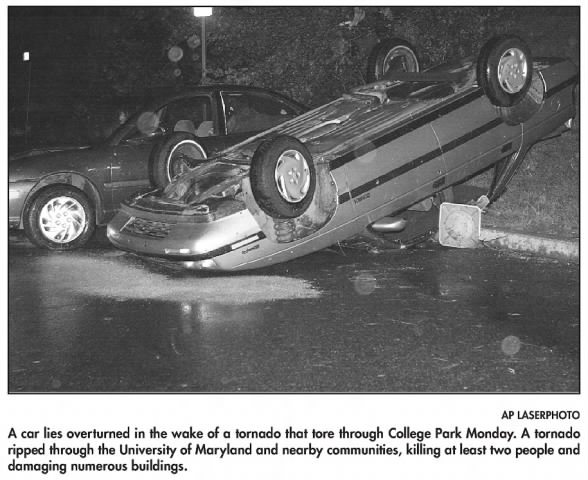 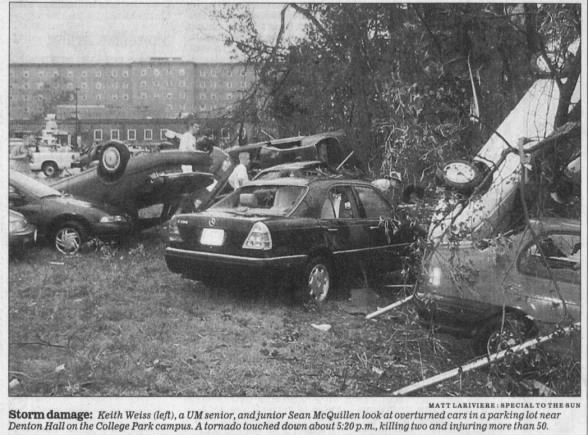 At least 48 people, including 25 students, were injured on the campus. 78-year-old Clarence Kreitzer, a Bowie Volunteer Firefighter, died of a heart attack during the clean-up at the campus.

The tornado left the campus and took the steeple off of a church located at the intersection of University Boulevard and Metzerott Road. The writhing winds then roared into the Courtyards apartment complex just northeast of this intersection. 700 students were left homeless here as apartments were ripped apart.

As the twister raced north-northeast across the Paint Branch Golf Course, it snapped numerous trees. The storm then crossed Cherry Hill Road, where it unroofed a Home Depot and a Linens’ n Things.

The tornado crossed I-495 near the intersection with Route 1 during rush hour traffic. One tractor-trailer was flipped, but no other vehicles were damaged. Next in line was the USDA’s National Agricultural Research Center in Beltsville. Thirty greenhouses were smashed, and 15 other structures on the facility sustained varying degrees of damage. A bottle of pink dye inside of the one research building was busted, with the dying being spread throughout the building. A row of historic willow oak trees was totally wiped out, and at least 65 vehicles were peppered by flying debris. Damage to the facility totaled $40 million.

Severe powerline devastation occurred along Route 1 before the tornado roared into the Chestnut Hill Shopping Center. Three people at the shopping center were injured by flying glass. Along Powdermill Road, an office building was ripped open. At least 100 homes in Beltsville were damaged, and one was destroyed.

Minor damage occurred to trees in the Virginia Manor Industrial Park and through the Villages at Wellington Subdivision. As the tornado crossed Cherry Lane, it plowed into Laurel High School. An annex with six classrooms was unroofed and torn apart, and three people inside were injured. Continuing toward the north-northeast, Ron Garrett’s house on the 1000th Block of Tenth Street was left as a mound of rubble. Just a stone’s throw away on Montrose Avenue, a woman was outside walking her dog. She was lifted into the air and broke her leg when she fell. Her dog was uninjured. 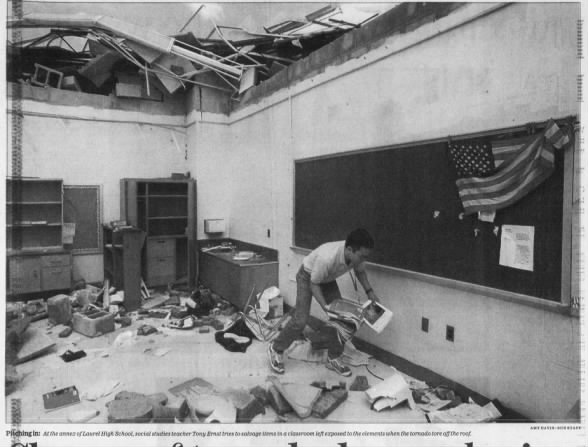 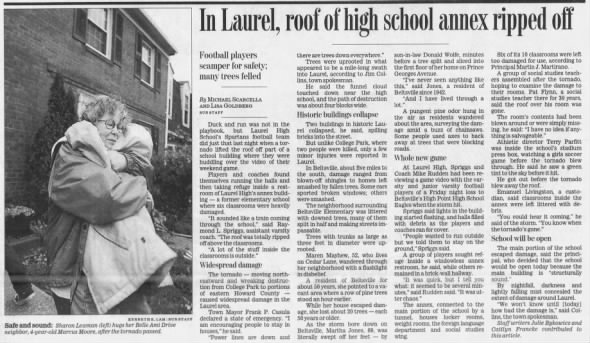 The historic Harrison-Beard Building located at 901 9th Street was unroofed and had its brick walls crumbled. The building was constructed in 1890 and once housed City Hall, a fire department, and, more recently, a thrift shop. The building had to be torn down due to the damage. 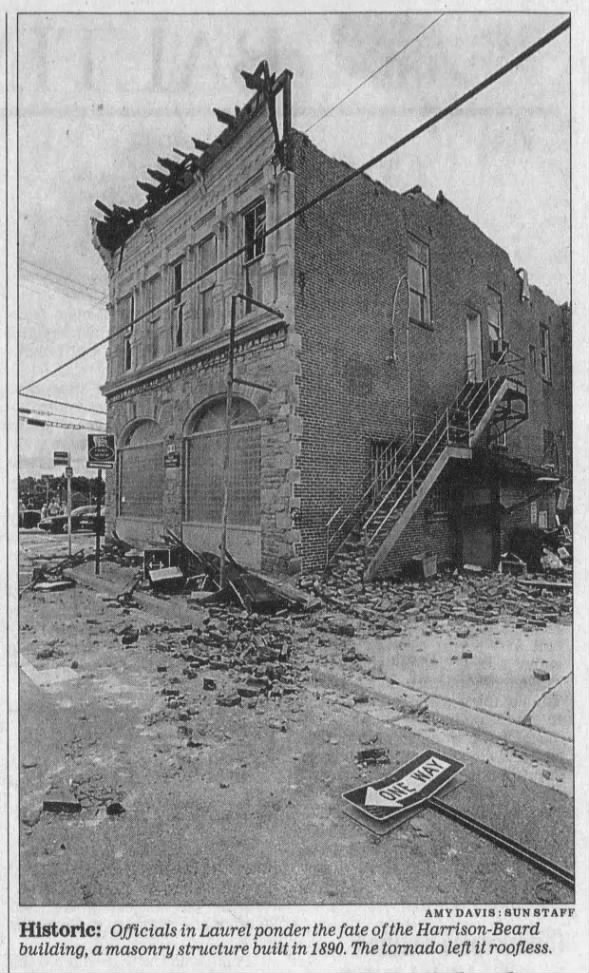 Crossing the Patuxent River into Howard County, the tornado ripped into the Settlers Landing townhouse complex. Forty-three townhomes were damaged, four of which were deemed inhabitable. The twister weakened and produced only spotty tree damage for the next five miles until it dissipated at the intersection of Snowden River Parkway and Route 175 just southeast of Columbia. 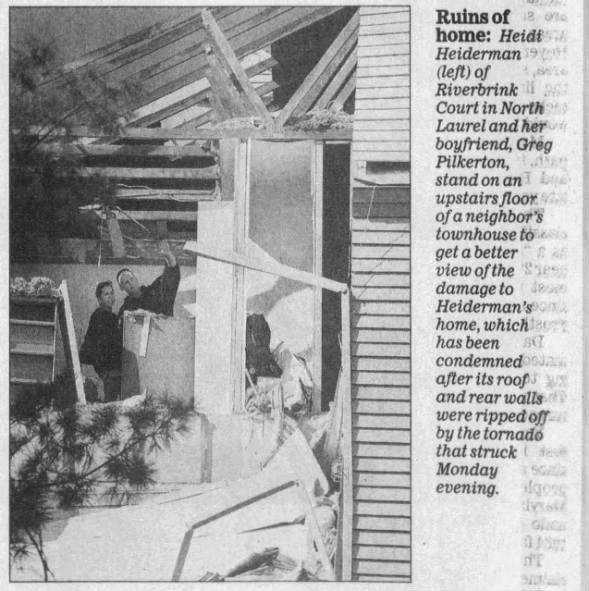 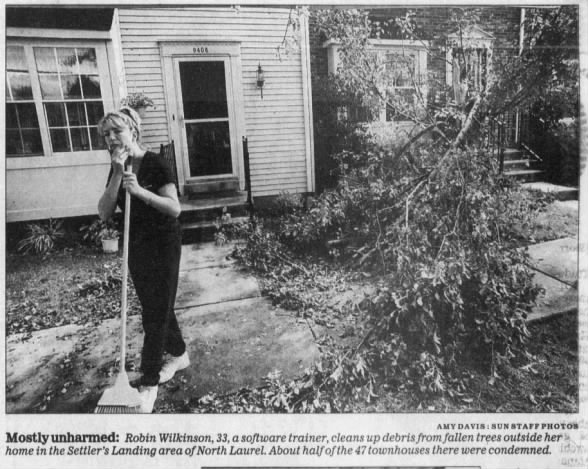 All told, 861 homes, 561 vehicles, 23 businesses, several schools, and churches were damaged or destroyed. The University of Maryland suffered significant damage. At least 55 people were injured, and sadly there were three fatalities; two were directly attributed to the tornado, and the third was considered an indirect death. Over $100 million in damages occurred across the path. The twister serves as a stark reminder that tornadoes can hit anyone, even the highly populated suburbs in the Washington DC/Baltimore Metro Area.