There were 4 tornadoes confirmed on September 21, 2005, all in the state of Minnesota.  A series of supercells pushed through the east central part of the state producing not only the tornadoes but large hail, flashing flooding and widespread wind damage.  This summary looks at the strongest tornado to occur, an F2 in Anoka County.  Along with the tornado, the NWS Twin Cities stated “a rear flank downdraft was also responsible for causing damage in parts of Coon Rapids and Blaine.”

In all, 10 homes were severely damaged.  20-30 others damaged to a lesser extent.  There was one injury.  A woman was blown from the upper story of her home into a tree.  100 trees were damaged at the Bunker Hills Golf Course.

A damage survey determined that the tornado touched down in the east central portion of Coon Rapids, only a few blocks west of the border with Blaine. It traveled east-southeast causing mostly F0 to F1 damage at first, but strengthened to F2 status near the intersection of Jefferson Street and 104th Court. The tornado dissipated only 1/4 mile west of the National Sports Center complex. Ten homes were rendered uninhabitable, and thirty others were damaged to a lesser extent. A woman suffered minor injuries when she was blown from the upper story of her home into a tree.

Additional Information from the NWS Twin Cities Summary of the Event

This tornado first touched down in east central Coon Rapids and continued into Blaine. The worst damage was just south of Madison Elementary School.  A rear flank downdraft was also responsible for causing damage in parts of Coon Rapids and Blaine. A large portion of a roof was removed and blown onto University Avenue and 100 trees were damaged at Bunker Hills Golf Course. Also, 10 homes were severely damaged while 20 other homes were significantly damaged. 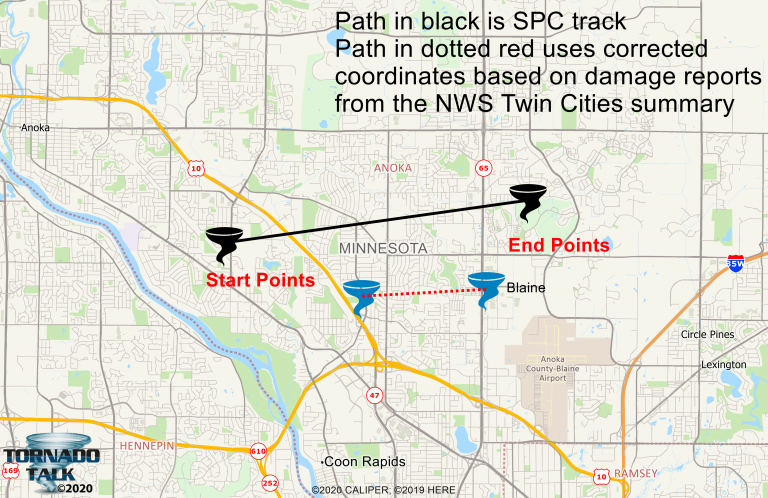