This summary will focus on the F4 that tracked over 27 miles through Perry County, MO into Jackson County, IL.  It was the last F4 that was a part of the original Fujita Scale.  The most intense damage was found near Crosstown, MO. Maximum winds were estimated at 210 mph.  The tornado weakened to F2 intensity as it crossed into Jackson County, IL.

In Perry County:  62 homes were destroyed, 17 had major damage. Numerous vehicles were tossed.

This violent F-4 tornado reached its maximum intensity near the village of Crosstown, where peak winds were estimated near 210 MPH.  Along the Perry County portion of the tornado track, 62 homes were destroyed, 17 had major damage, and 23 received minor damage.  Ten of the destroyed homes were mobile homes, and seven that sustained major damage were mobile homes.  Three churches were destroyed or heavily damaged. Numerous vehicles were tossed. Over 100 utility poles were broken off. Hundreds of trees were broken off or uprooted.

The tornado first touched down at County Road 302 near Friedenburg, where F-1 winds destroyed a barn and partially unroofed a two-story house. There were also downed trees, including a few that fell on a house. As the tornado continued northeast across County Road 316 between Crosstown and Friedenburg, it widened to about 100 yards. Scores of trees were broken off or uprooted, and the roof was blown off a house. The tornado strengthened to F-3 intensity as it reached the junction of Highways P and C in Crosstown. The roof was torn off a church, windows were broken, and other structural damage occurred. Nearby, the roof was blown off a two-story brick store that was over 100 years old. An overturned vehicle was in the front yard, and trees were mangled. The width increased to 220 yards.

In the center of Crosstown on Highway C, the tornado reached F-4 intensity. This is where a site-built house was levelled. The F-4 damage continued east along County Road 350 in Crosstown, where two more site-built houses were levelled. Only the bolted-down floor of one residence remained. An eyewitness along County Road 350 stated he took shelter in the basement after seeing fog coming directly toward him. His house remained mostly intact, except for the roof and garage. The tornado weakened to F-3 intensity about one to two miles east of Crosstown, where a modular home was destroyed except for the bathroom. A vehicle was tossed in the yard. The weakening trend continued east along County Road 350 to the Mississippi River, where many trees were uprooted and broken off. Some outbuildings were thrown around. The path width decreased to 75 yards as the intensity lowered to F-1. The average path width was 150 yards.

There were five injuries requiring medical attention, including one broken arm. Two people were moderately injured when the vehicle they were driving was tossed into a house. Dozens of other residents received minor injuries but did not seek medical attention. Where the tornado crossed the Mississippi River, a barge loaded with coal was pushed to the shoreline. The windows were blown out of the tug boat, and enough coal was blown into the tug boat that it was shovelled out. The tornado crossed the Mississippi River into Jackson County, Illinois.

This tornado crossed the Mississippi River from Perry County, Missouri. The tornado weakened from its maximum F-4 intensity to F-2 intensity by the time it entered Jackson County in the Mississippi River bottomlands near Wilkinson Island. At this location, the wall of an old two-story farmhouse was blown out, and the roof was blown off. Hundreds of trees were broken off. Tree damage was visible across the river in Perry County, Missouri. The path width was estimated to be 200 yards wide on the Jackson County side of the river. Before reaching Illinois Route 3, the F-2 tornado widened to 250 yards and destroyed a mobile home. A resident of the mobile home was sent to the hospital. Nearby, a house was unroofed, and trees were snapped or uprooted. Another house lost a room that was added on. A swing set was blown 200 yards and wrapped around a mailbox. An empty tractor trailer rig was overturned. An empty grain bin was blown 100 yards into a field. Full grain bins were severely damaged but remained in place. The roof was blown off a brick house.

Peak winds where F-2 damage occurred in western Jackson County were estimated near 150 MPH. The average path width was about 150 yards. A total of about six homes were destroyed or severely damaged, and a dozen others were damaged to a lesser degree. Dozens of other non-residential buildings, such as garages, sheds, barns, and carports, were destroyed. Along the path, striations were evident in fields, and scores of utility poles were snapped off. There were numerous reports of debris falling from the sky in neighboring Perry County, Illinois. Debris as large as pieces of siding and roofing was reported in Du Quoin.

The NCDC coordinates usually match but in this case they didn’t.  I have plotted that in red.  This seems to be a better track as it bring the tornado toward Crosstown where it hit. 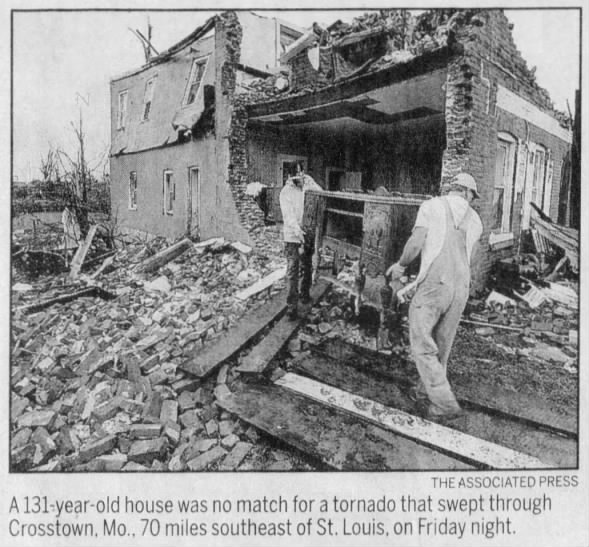 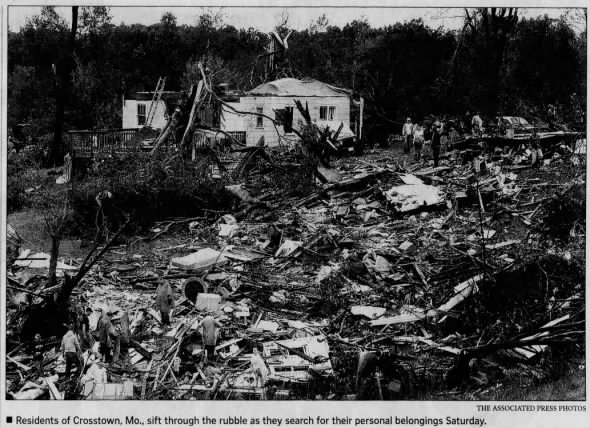 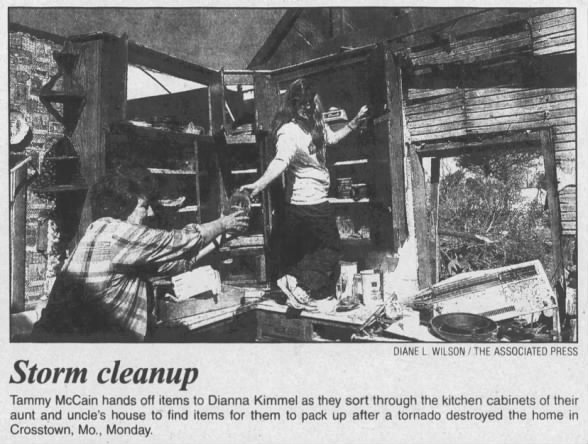 We gathered information for this event from the SPC & NCDC Databases and the September 2006 Storm Data Publication found the following differences: