On This Day: December 6

One of the strongest tornadoes to ever hit in Southeastern Louisiana occurred on December 6, 1983. The tornado was rated F4 on the Fujita Scale. This damage was found at the Belle Pointe Subdivision. Several homes had their foundations swept clean. Per Storm Data, the tornado was not given an F5 rating, “because the walls were nailed to the foundation, not bolted.” Read the full summary here! 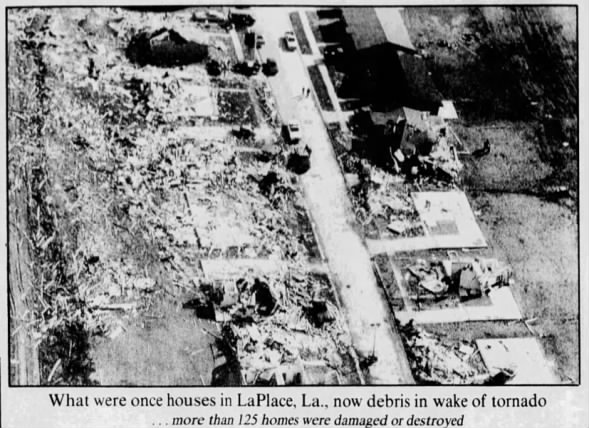 December 5, 1892: Grazulis documents an F2 tornado in Harrison County, TX. it moved 10 miles and passed close to Marshall. A child was killed as her tenant home was destroyed. “It was noted that this event passed a quarter mile south of the 1884 tornado path, a tornado for which no record could be found.”

December 6, 2004: An F1 tornado tracked for six miles across northeastern Brown County, Texas. Along the path, numerous trees were downed, and some trailers and metal farm buildings were damaged. Source.

December 6, 2019: Cyclone Ambali reached peak intensity in the western Indian Ocean. The estimated wind speed was 160 mph, which is equivalent to a Category 5 Hurricane.  Source.

On this day in 2006, NASA reveals photographs taken by Mars Global Surveyor suggesting the presence of liquid water on Mars. Get more daily history at onthisday.com!

On this day in 1870, William S. Hart, American stage and silent motion-picture actor, who was the leading hero of the early westerns, was born in Newburgh, N.Y. He died in 1946. Source:  Britannica.

On this day in 1995, Michael Jackson collapses while rehearsing for an HBO special! Get more daily history at onthisday.com!

On this day in 1949, American blues artist, Leadbelly died. Huddie William Ledbetter wrote many songs including ‘Goodnight Irene’, ‘Cotton Fields’, ‘The Rock Island Line’, and ‘The Midnight Special’. Leadbelly was jailed several times for fights and knife related incidents, he was once jailed for shooting a man dead during an argument over a woman.  Get into the groove with more music trivia at thisdayinmusic.com!