13 tornadoes were confirmed on July 8, 2009.  8 of them were in the state of North Dakota.  Most were rated EF0/EF1 but there was one that much stronger.  It traveled just south of Dickinson and produced EF3 damage.

Per the NWS Storm Data Entry, the tornado passed just south of the Heart River.  It was more than likely rain-wrapped and lasted only 15 minutes. 450+ structures were damaged with 100 of those declared beyond repair.  There were 2 minor injuries in homes.  Estimated max winds were 150 mph.

Meteorologists from the National Weather Service conducted a storm damage survey in and around Dickinson on Thursday, July 9th, 2009. Meteorologists walked through the area and spoke with numerous people affected, many of whom were eye witnesses to the event.

This tornado passed through the city of Dickinson on the far south side, mainly just south of the Heart River. No witnesses spoken to actually saw the tornado. From their eye witness accounts, and from video obtained by the Dickinson Police Department, it is likely that this was a rain-wrapped tornado, and very difficult if not impossible to see. The tornado occurred before sunset, yet it was described as being as dark as night during the event.

The conclusion of the damage survey was that this tornado touched down around a mile or so outside the city limits, on the southwest side, and moved east-northeast, passing through the far southern part of the city. It lifted back into the parent thunderstorm on the extreme southeast side of Dickinson near the city limit. This occurred in the window between 815 PM MDT and 830 PM MDT.

Over 450 structures were damaged, of which nearly 100 were declared completely destroyed or beyond repair. Numerous vehicles were damaged or destroyed, some were on their roofs. Power lines were snapped, knocking out power to most of Dickinson, and tree damage was extensive. Two minor injuries were reported, with no deaths. The injuries were to a 23 year old male and a 42 year old male. Both occurred in homes.

The worst damage surveyed was between the Heart River and roughly 8th Street Southwest and 8th Street Southeast in southern Dickinson. Of that damage, the absolute worst corresponded to middle EF3 on the Enhanced Fujita Tornado Scale. From that it was determined that peak wind speeds in the tornado were on the order of 150 mph.

Other parts of Dickinson and the surrounding area sustained wind damage likely associated with the rear flank downdraft of the storm.

Photos via The Dickinson Police Department 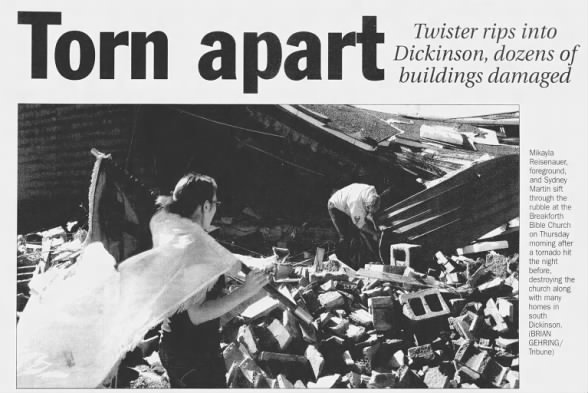 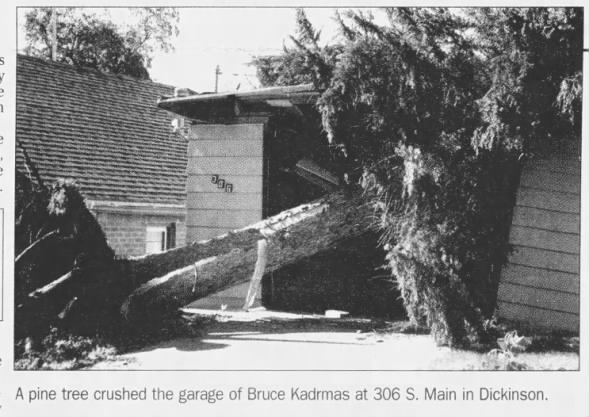 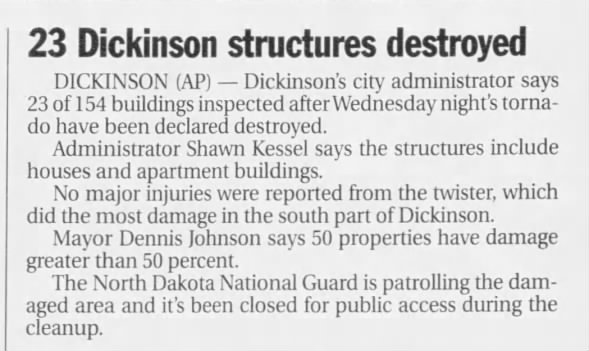 “The 7-8-9 Tornado” from the Dickinson Police Department