A strong F3 tornado moved just over 5 miles through parts of Door County, WI on August 23, 1998.  It occurred during the evening time and lasted 14 minutes.  According to the NWS Green Bay summary of the event, the width fluctuated from 1/4 to over 1/2 mile at times.

This tornado began as a waterspout off the water of Green Bay and moved on shore SW of Egg Harbor, near Horseshoe Bay.  Thousands of trees were snapped and uprooted in Murphy Park.  Houses and businesses were severely damaged as the tornado crossed Highway 42.  F3 damage occurred at a two-story farm house torn off its foundation.   There were no fatalities and two injuries caused by this tornado.

Three supercell thunderstorms dropped large hail and tornadoes across northeast and central Wisconsin during the afternoon and early evening. The first two storms developed quickly over central Wisconsin and then tracked east-southeast through the Fox Cities. These two storms primarily produced large hail (1 to 2 inches in diameter) and some wind damage. A brief tornado touched down with the first storm near Menasha (Winnebago co.). The third storm developed farther north in the northeast part of the state. This storm evolved more slowly, but went through the classic life-cycle of a tornadic supercell and spawned an F3 tornado in Door county.

Large hail struck the Fox Cities, especially Appleton, producing over $5 million in damage to vehicles and roofs of buildings. This was the second multi-million dollar hailstorm this year in Appleton. In Sherwood (Calumet co.), hail damage to a golf course was so severe that it did not open until two days later. In Brillion (Calumet co.), hail shattered large glass panels of a church.

The most severe damage occurred when a tornado tore a path 5.1 miles long and over a half-mile wide across Door county. The tornado came onshore from Green Bay at Murphy Park, on the Door county west coast at 630 pm. Thousands of trees were flattened in the heavily wooded area. About 30 homes, businesses and barns were destroyed or heavily damaged by the storm, but only two minor injuries were reported. Some livestock, however, including five horses, were lost. The tornado knocked down seven power poles holding electrical transmission lines, bringing blackouts to most of the north half of Door county. Thirty adults and 17 children at a campground found refuge in a concrete building as the tornado approached the grounds. Two minor injuries occurred at the camping resort as it took a direct hit. The twister made it almost two-thirds of the way across the county, before dissipating about 3 miles west of the Door county east coast. 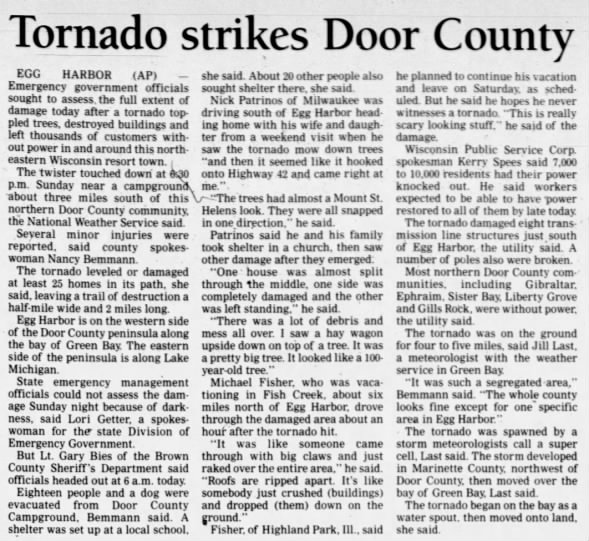 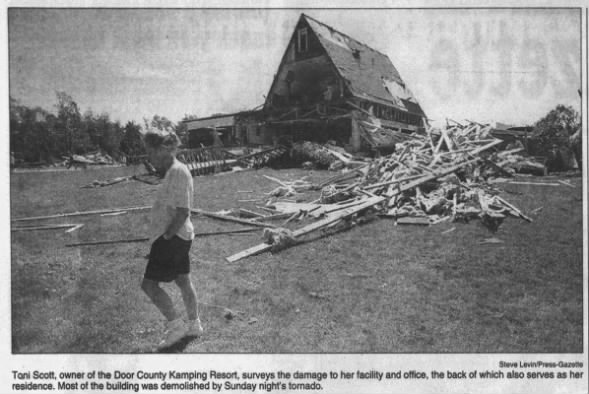 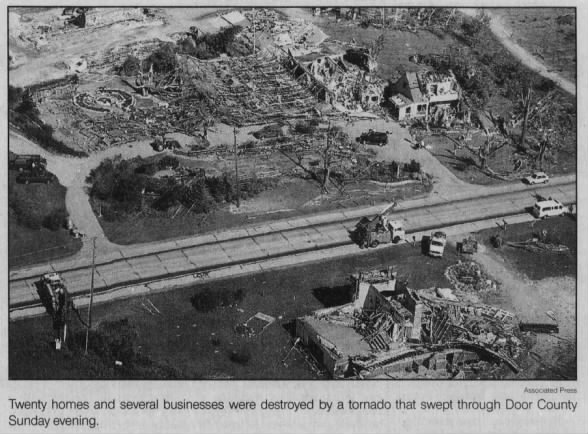 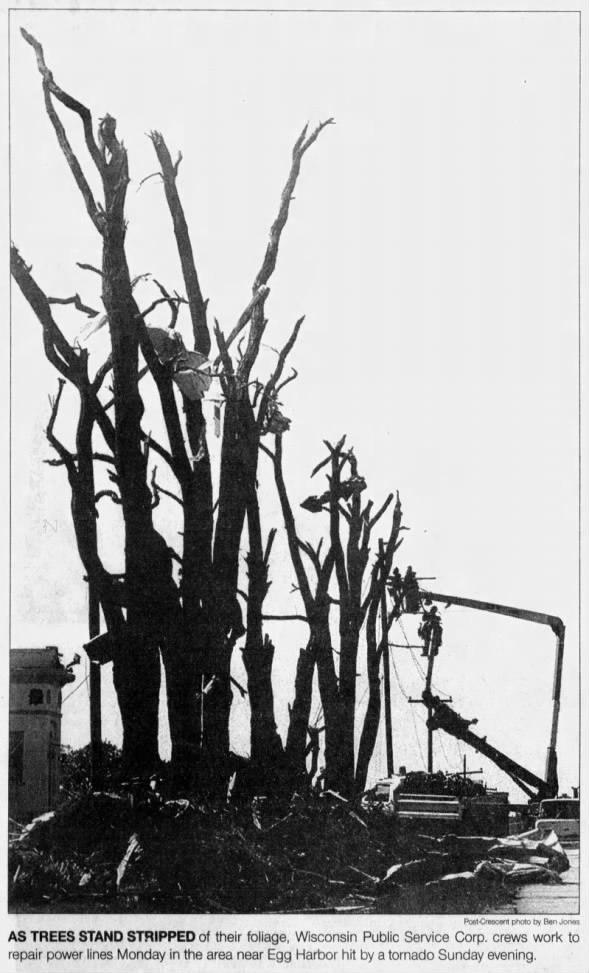 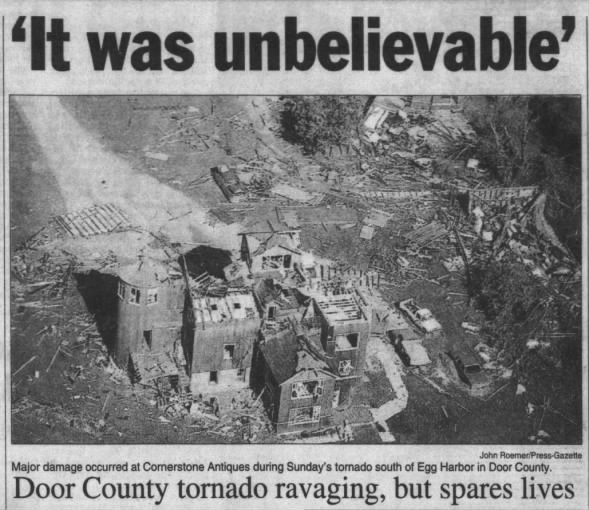 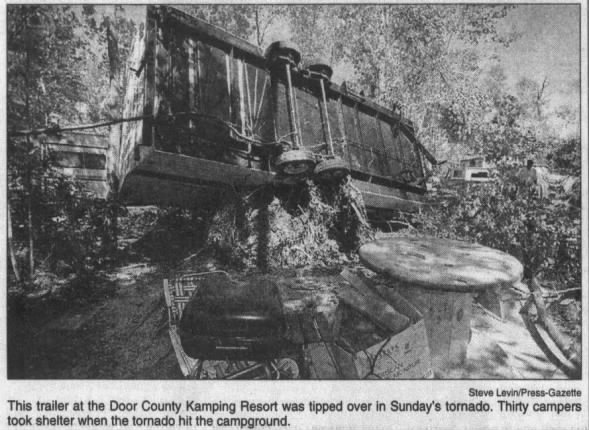 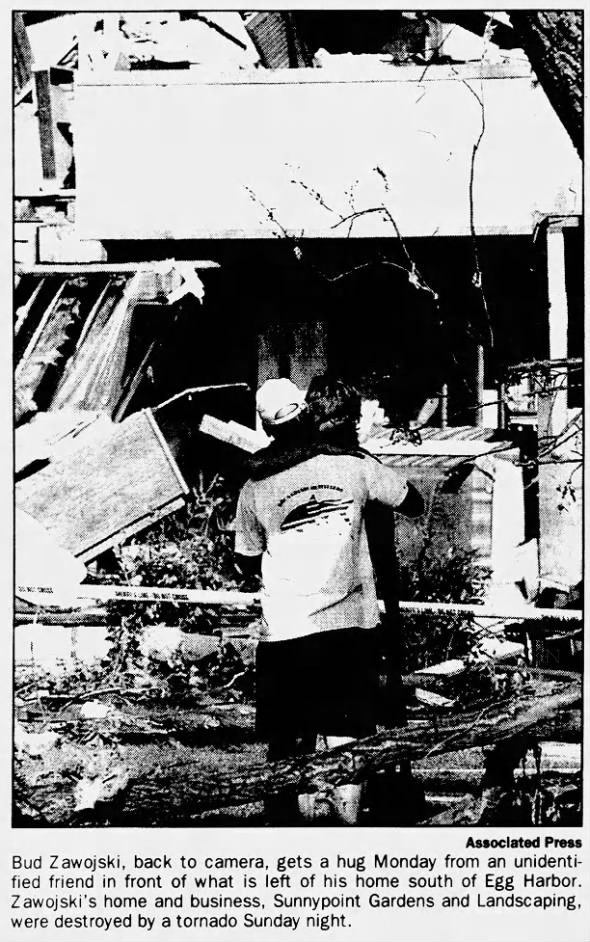