On an early June Saturday in the mid 1970’s, Drumright, OK is in the midst of adjustment.  School-is-out fever is beginning to take hold for the town formerly named “Fulkerson”, and its roughly 3,100 residents (proper and rural) are mostly unaware of the change about to be forced upon their small community.

The former home of Tydol Oil Company and once co-anchor of the “Cushing” oil field, where Tom Slick and the Wheeler Well are icons of industry, has long ago bowed the oil crown to its big brother to the west down HWY 33 (Cushing), where the Midland Refinery is chugging away on the west side of town.  Though the two communities share a sibling-like rivalry over sports and a small school bell, they are forever linked by the history of the oil field and in times of need have always come to each other’s aid.

In the northwest portion of town, the Drumright nursing home sits amongst a grouping of middle class residences as residents partake in daily activities or enjoy their own personal day.  In the OKC metro area, though, the first signs of a significant day for severe weather are beginning to rear their heads to meteorologists, slowly confirming prior suspicions that the day’s storms would overcome the effects of those overnight on the atmosphere.

The clear sky is beginning to give in to the moisture it has inherited from the potent Gulf, along with substantial southerly winds and rapid heating.  This combines to form a volatile atmosphere across a large swatch of OK and parts of KS.  By mid-noon, towers many thousands of feet in height begin to power their way into history.

At 2:42 pm, what shall come to be rated an F3 tornado begins to tear into the earth near Will Rogers World Airport prompting live tornado coverage for the metro by meteorologists across the media spectrum, including Gary England and Mike Smith (who was still fresh off covering early morning storms).  Impacts from the tornado soon knocked out the local weather service office, shifting most responsibilities to the Tulsa branch.  As a barrage of twisters begins to rage in the central portion of the state, Drumright goes about its business.  Drumright is far from a stranger to damaging and violent tornadoes.  Back in 1922, an estimated F4 tornado tracked through parts of the then much larger community, and in 1956 an estimated F3 tornado had again ravaged parts of the city and dispersed chickens from a farm south of town throughout the area along a portion of the path.

On this Saturday, storms are exploding.  As the storms are carefully tracked, rotation begins to intensify on a storm moving toward the Cushing, Drumright area.  In Cushing, residents take precautionary cover as the dark sky moves in.  At 4:55 pm, in the area of Oak Grove, a small church community in SE Payne County, the event’s next and strongest tornado occurs from this storm.  The tornado initially shows a multi-vortex structure as it impacts the Oak Grove School.  In Drumright, Civil Defense sirens begin to wail as the ever-growing tornado approaches the town from the southeast, crossing Highway 33 doing damage to tress and smaller structures.  Though it is later criticized as too short, the roughly five minute lead time given by the sirens likely saves many precious lives.

At 5:01 pm, the tornado enters the city, its shape that of a large stovepipe. The intense winds begin to lash out at anything within reach of the tornadic circulation.  The nursing home itself soon takes a direct hit as the tornado tracks NNE through the city;  some people are continuing to seek cover.  It is at this time that a fortunate photographer near Olive, looking southwest towards Drumright snaps a photo of the now deadly cyclone.  As the tornado tears through Drumright towards Olive, Cushing will soon begin to activate its auxiliary fire and police personnel for rescue and security mutual aid and the Cushing Hospital begins to brace for overflow as word spreads.

Back in Oklahoma City, Gary England watches and listens in horror as radio reports match the visual on radar.  As the tornado exited town, the smell of destruction was in the air and 12 of Drumright’s citizens lay dead or dying in the rubble; six at the nursing home.  Over 100 homes and other structures are left behind damaged or destroyed in Drumright itself as the tornado bears down on Olive at 5:15 pm where it again takes aim at a school and destroys several homes ranging from trailer houses to frame homes; it claims 1 life in Olive.

Next the tornado begins to take on a more directly northeasterly track and bears down on Pier 51 at Lake Keystone around 5:35 pm.  In the Sperry area it claims its 14th and final human victim when it demolishes a woman’s mobile home.  The tornado slightly weakens and continues on towards the western part of Skiatook where it will damage several well-built homes before finally lifting after at least a 29 mile long rampage through 4 counties (other sources say up to 55 miles).  Note:  The SPC lists only 3 counties.  The NWS Tulsa states the tornado went through 4 counties:  Payne, Creek, Tulsa and Osage.

The F4 tornado leaves behind an additional 150 plus injured, primarily in Drumright.  Along the path, vegetation and structural damage varies.  Wind speeds are estimated at the time to have been in the 250 mile per hour range, but adjusting to the new EF scale it is more likely max winds stayed below 200 mph when taking the overall structural damage done into consideration.  The max path width is estimated between 400 and 440 yards wide.  In Drumright, aid arrives from as far away as Tinker Airbase.

Drumright first responders and volunteers are first on the scene as Cushing begins to scramble its resources in that direction.  At the nursing home, the scene is frantic and local hospitals begin to overflow from the deluge of injured.  Cushing and Drumright police, combined with local deputies secure the area and begin to help residents as rescue efforts continue through the night.  One man at the nursing home is later reportedly uncovered clutching his bible.  The tornado is one of 22 to occur in OK alone that day (36 overall in roughly 9 hours); as well as the highest rated of the entire event.

One Drumright officials tells the AP, “The hospitals are overloaded and we have a good many bleeders”, as aid dispatched by Governor Hall begins to truly arrive in force to supplement Drumright, Cushing, Creek County, and OHP elements. Tornadoes later tear through the Tulsa metro including a pair of F3 rated storms.  Drumright efforts are partially hampered by precipitation and several more tornadoes in the area including an F3 tornado that occurs nearby in the Stroud/Davenport area of Lincoln County requiring resources that may have been easily devoted to the Drumright/Olive efforts.

Drumright recovers and by 2019 is again growing (though the Tornadoes have dropped to 8 man football), but to this day it remembers that dark afternoon in 1974.  The day’s impact is far from all negative, though, as its after-effect on the field of meteorology is largely positive overall.  Many meteorologists and storm chasers/spotters were inspired by the event, as well.  2019 marked the 45th anniversary of the tornado.

We try to add the names of those who perished during a tornado event to honor their memory.  A volunteer at the Drumright Museum forwarded the names to us:

1 was an Olive citizen
Alvernia Hallman

2 were on a houseboat at Lake Keystone
Mr. & Mrs. George Battingfield 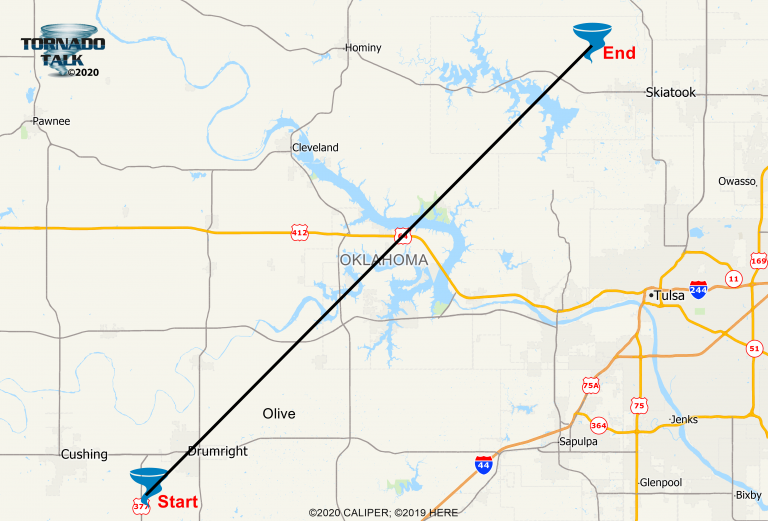 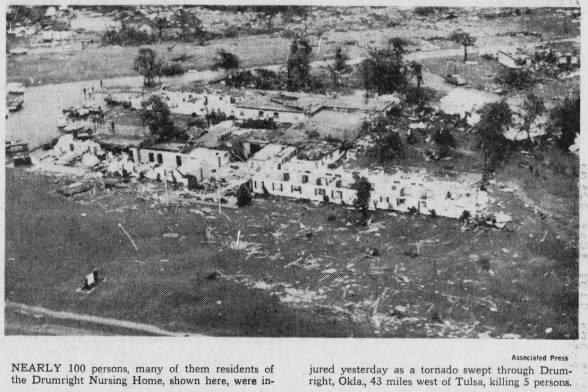 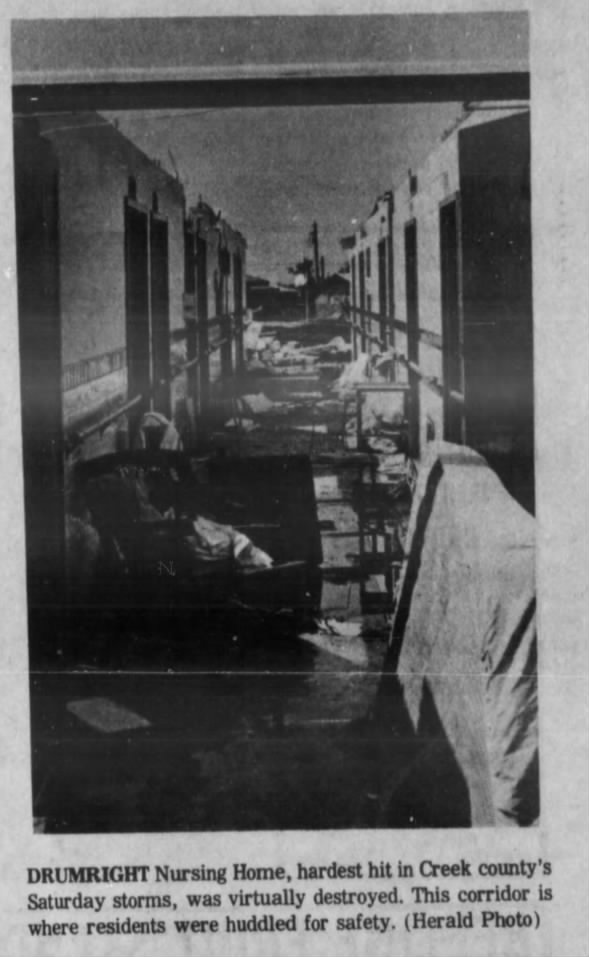 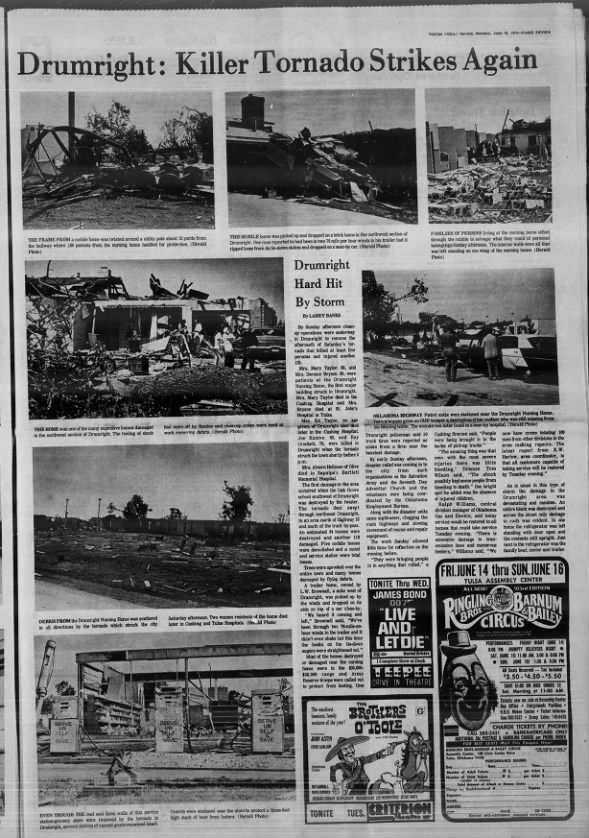 Note from OKTornadoDB:  Most of these photos are from the Drumright Historical Society, but the tornado pic we are so proud of was first sent to me by an Olive fireman (they got a FD after the tornado) and I have sent it to NWS Tulsa to use in an infographic.  My text is spliced from news articles, Drumright Historical archives, “Warnings: The True Story of How Science Tamed the Weather” by Mike Smith, “Weathering the Storm” by Gary England, other primary and secondary sources, and of course multiple first hand interviews with survivors and first responders including my grandfather.