It was a day that came to be known as “Black Friday”. On July 31, 1987, one of the most powerful tornadoes in Canadian history struck Edmonton, Alberta and parts of Strathcona County. It is the deadliest known tornado for Alberta and the second-deadliest for the country. This significant tornado was given a rating of F4 with maximum winds estimated at 260 mph. This tragic event led to the development of Alberta’s Emergency Public Warning System (EPWS), which would be implemented in 1992. Per the Alberta Emergency Alert Website, “The EPWS was the first rapid warning system of its kind to use media outlets to broadcast critical life-saving information directly to the public.”

Details for the main summary of this event were acquired from the following sources:

A line of thunderstorms formed along the foothills of Southern Alberta before 12pm MDT. As the storms strengthened and moved northward, a “severe weather watch” was issued at 140pm MDT. This included the Edmonton area. The line was moving at a speed of 70 km/h (43 mph). Ahead of this line, an individual cell formed near Leduc. This is approximately 20 miles south of Edmonton. A call came into the weather office just before 3pm MDT reporting a “rope-like funnel” had been seen near Leduc.

The caller was Tom Taylor, a Leduc pharmacist. I found the description of what he saw on his own website for Bellweather Kennels Canada. From Taylor, “Suddenly a thin translucent funnel flashed onto the landscape. I could see through it. Material was radiating out from the funnel and upward at a 45 degree angle, in a brownian-like movement, and disappeared into the cloud base. The funnel connected the cloud base to the ground below. This was a tornado. It had touched down inside the eastern edge of Leduc, Alberta. Then it was gone, just as suddenly. It has lasted only ten seconds.”

This call along with the observance of a strengthening cell on radar led to the issuance of a tornado warning that included Edmonton. Taylor continues his account after the phone call ended. “I returned to the loft upstairs. By this time the lowered cloud was North East of the house. As the cloud traveled toward Beaumont, Alberta, the belly slumped, spitting out a huge funnel which slammed onto the ground below. I watched as the tornado churned along, exploding buildings it encountered. The tornado eventually turned northward where it raked the eastern edge of Edmonton, Alberta, causing death and destruction. And as they say, the rest is history.”

And it would certainly be one for the history books. The deadliest tornado ever recorded in Alberta was heading north toward its capital city. The supercell that had produced a brief rope tornado near Leduc had now spawned “The Black Friday” twister. It would create a continuous damage path for the next hour.

Per the Atlas, “between 1500 and 1605 MDT, the tornado, moving from south to north through east Edmonton, left a continuous damage swath 37 km in length, ranging from 100 m to more than 1000 m in width.” Between various sources there are some discrepancies regarding the path length. Officially, the Canadian Tornado Database lists a length of 30.8 km (19.14 miles). The APSS assessment lists a length of 40 km (24.85 miles).

The tornado tracked through southeast Mill Woods. It was observed as a broad cone with multiple vortices. The fire department rescued 15-20 victims from collapsed buildings and damaged vehicles. Some were treated for serious injuries. 32 homes were damaged.  Just south of Mill Woods there were three homes destroyed and two had major damage.  This area received some of the largest hail during the event with some stones reaching 10 cm (nearly 4 inches) in diameter.

From here, the tornado stayed west of Maple Ridge and moved through the main industrial area of Edmonton. This area is known as “Refinery Row.” Per the Atlas, “the tornado traveled between 2 operating oil refineries, and it came dangerously close to Edmonton’s largest chemical plant, an Edmonton Power thermal-electric generating station, and the Maple Ridge Mobile Home park!” Also, “the tornado, in the shape of a massive cone, began ravaging the industrial area with winds of at least 331 km/h, the minimum speed for the F4 category of the Fujita scale.” This is equivalent to 206 mph.

A video of the tornado was taken from buildings that house the Alberta Weather Centre. Per the Atlas, “It showed a tornado which varied between a column and a broad cone shape as it flung debris over a wide area. A study of the video by Victor Chung (1988) determined that the debris was traveling at 144 to 209 km/h as the tornado crossed the Sherwood Park Freeway, a region where the damage to industrial buildings suggested F4 winds.” 12 of the 27 total fatalities occurred in the industrial area.

After crossing the freeway, the tornado hit Clareview.  Per the fire department in the APSS report, one man and two women were rescued and sent to the hospital for treatment of their injuries.  There were a total of 10 injuries at Clareview.  463 homes were damaged.  37 homes were destroyed or beyond repair.  Natural gas leaks occurred in this area.

The next area devastated was the Evergreen Mobile Home Park. A two-block-wide area of damage was observed and 170 mobile homes were destroyed. Some trailers disintegrated and others were piled three-high. Fifteen people were killed. The tornado ended 5 km northeast of the mobile home park.

The Atlas contains a list of what it calls “an interesting selection of damage sites.” Most of this damage was in the industrial park. Only the drive-in and ravine damage sites were situated further north on the other side of the river. The document lists a variety of sources to develop this detailed list. Here is a link to the table. I have also included the details below: 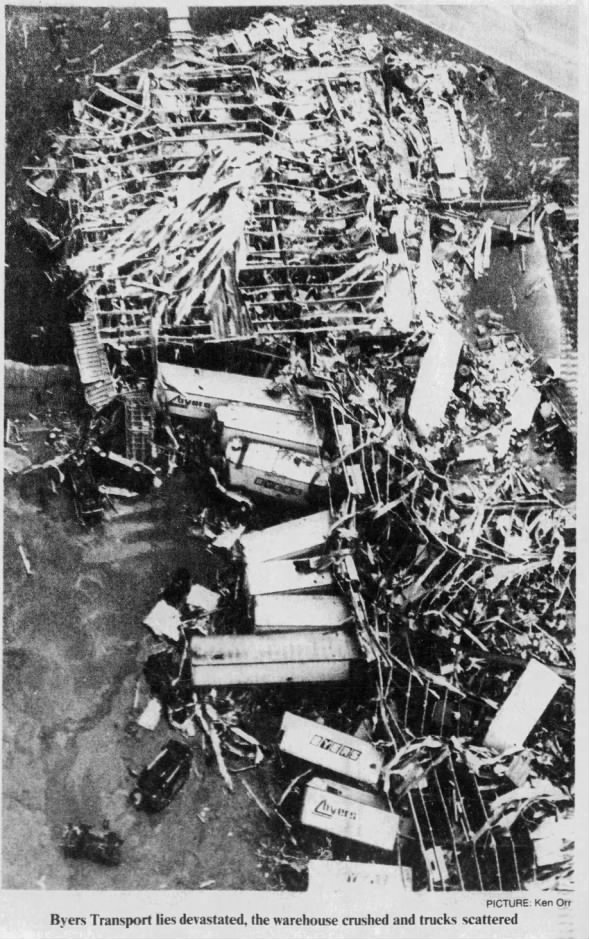 Per the Atlas, at least two satellite tornadoes were produced while the main tornado moved 1 to 2 km to the west.  They were not reported until 1995!  “The southernmost one was mentioned by Wilf Seutter during a conversation about damage caused by the main tornado. Seutter’s family watched this small tornado move northward from their acreage, near the start of its path, after it had flattened some trees in their woodlot.”  The other small tornado formed west of the Maple Ridge Mobile Home Park.  It destroyed the roofs of several businesses in the area.  The tornado was observed by employees of Blanchard Transport and the Shell-Sherwood oil marketing terminal.

In the midst of such devastation and chaos, there are always those tales of miracles.  I found one of those as I was digging into the Edmonton event.  An infant, barely a week old, was ripped from her grandfather’s arms at the Evergreen Mobile Home Park when the tornado hit.  Baby Kristen was thrown 100 meters and found alive by a stranger.  The stranger gave the child to another woman in the neighborhood, Marin Athanasopoulous.  When Marin turned around the stranger was gone.  She gave the baby to Bill Clark, a police officer, who rushed her to the hospital.

Kristen’s mom, Monique Gregoire dug herself out of the rubble and frantically searched for her child.  Her friend Marin told her about the stranger and how her daughter was now at the hospital and they were soon reunited.  It was a rough for few weeks for Kristen who was battling brain swelling and compromised lungs.  The tiny child battled and survived.

I found an article from the Edmonton Journal a year after the event documenting Baby Kristen’s story.  It is attached below.

In an article from CBC News for the 20th anniversary of the event, the publication highlights the reunion of Kristen with Bill Clark, the police officer who rushed her to the hospital.  Officer Clark was quoted, “You were so small, only in a diaper, I remember. And I’m going, ‘Holy, what are we going to do with all these people?'” he said.”I was so worried about you. That’s all I was worried about was the baby.”

This is the list of those who perished in the Edmonton Tornado.  The list was posted by the AP.  We honor their memory.

Eugene Zaparyniuk, 42 (died almost a week later from his injuries)

Hermitage Park in Edmonton is home to the Tornado Memorial built in honor of those killed. 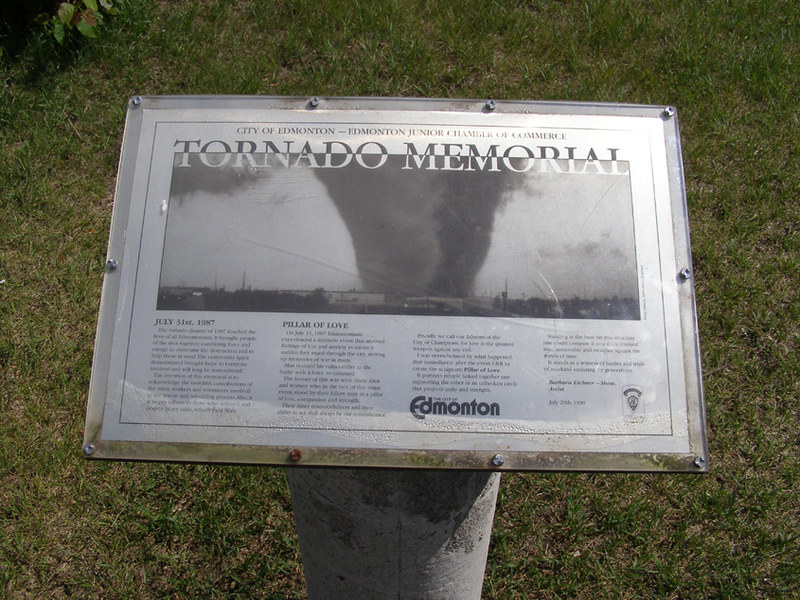 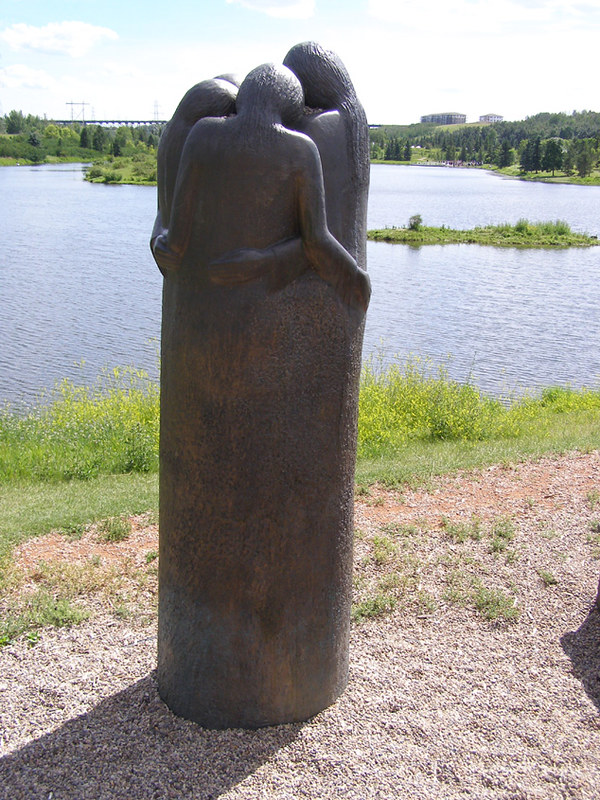 Aftermath Photos Courtesy of the Atlas of the Edmonton Tornado and Hailstorm, 1987.

Images are from the Atlas of the Edmonton Tornado and Hailstorm, 1987.  The photography was conducted on August 4, 1987 by Western Remote Sensing. Per the Atlas, “These excellent photographs were used to locate and identify nearly all of the industries damaged by the tornado, though the names of all of these industries are not documented in this study. The colour prints were donated to the Department of Earth and Atmospheric Sciences at the University of Alberta. The Edmonton Space and Science Centre made duplicates of some of the prints for a severe weather display shown in 1996.” 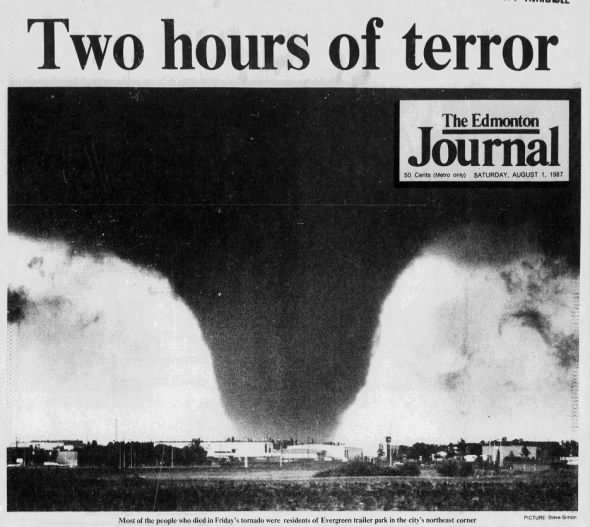 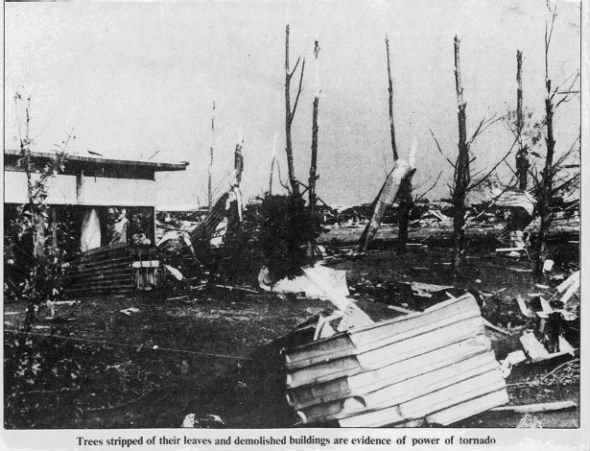 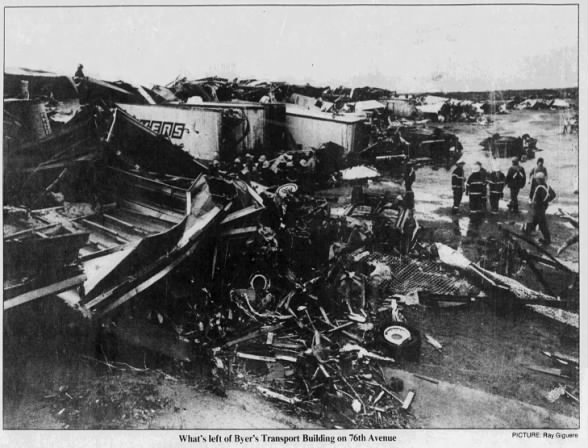 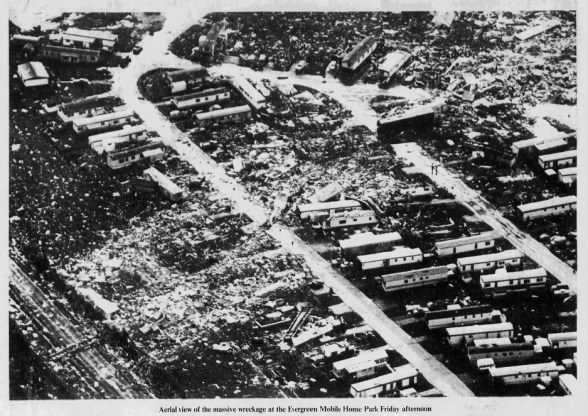 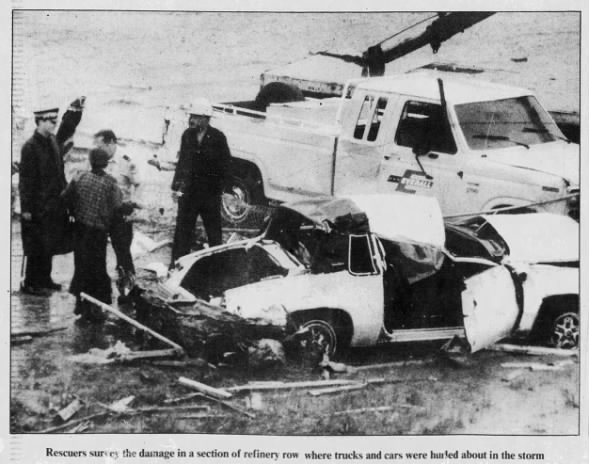 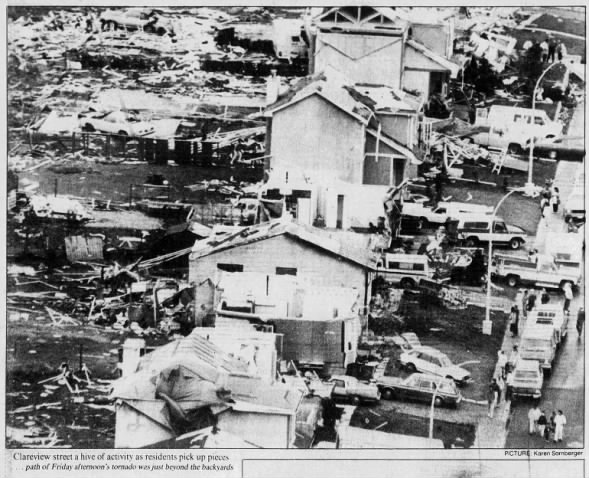 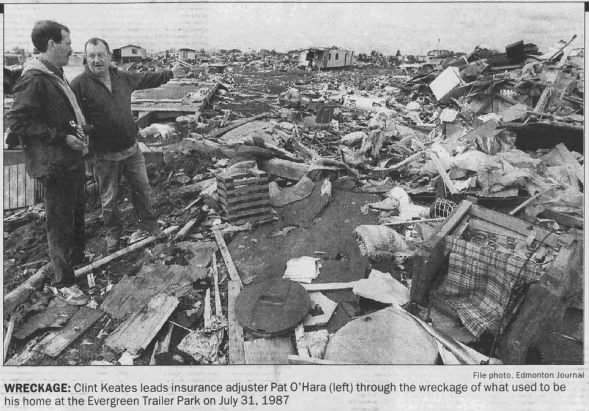 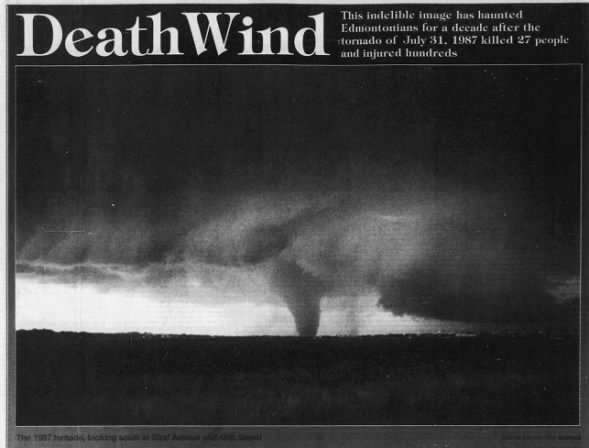