A destructive tornado hit parts of El Dorado, KS in Butler County on this day in 1958.  It was given a rating of F4 but Thomas Grazulis in Significant Tornadoes notes the tornado could have received an F5 rating but it was hard to determine with the available photos and descriptions.

The tornado began 7 miles WNW of El Dorado and moved ESE passing through the SW part of town.  Grazulis notes that a 45-block area was “torn apart”.  Approximately 200 homes were destroyed. Only 5 injuries listed in the SPC database.  The Climatological Data National Summary (CDNS) and Grazulis both list 50 injuries which is probably more correct.

A couple of odd occurrences listed in the CDNS summary:

A few more listed below in the full CDNS entry.

Tornado formed in clouds and almost immediately hit ground 7 miles west and 2 north of business portion of El Dorado.  Rate of travel estimated at about 30 mph.  Funnel cloud had grey-whitish appearance instead of usual black coloring.  Damage path through new residential section of southwest portion of town.  Hail of golf-ball size fell for a distance of 1/2 mile on either side of tornado path.  Elementary school and approximately 200 homes and many house trailers destroyed or badly damaged.  4 main electric trunk lines severed.  3 miles of telephone lines and 97 poles destroyed, these alone were a lost of $55,000.  441 families affected.

Some unusual features were;  a government bond found 60 miles southeast of El Dorado that bore El Dorado address;  eight $100 bills found intact in envelope far from owner’s home in El Dorado;  Boy found with a dozen splintered sticks protruding from his chest;  woman sucked through window and blown 60 feet from house and beside her was found a broken record, entitled “Stormy Weather”; automobile carried more than a block and jammed through roof where it lodged between a bed and a dresser.

Official SPC Coordinates are off.  Path should track through SW part of town, that is where greatest damage occurred. 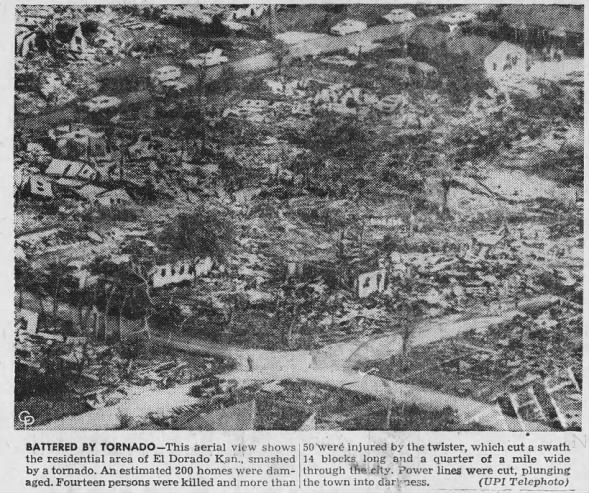 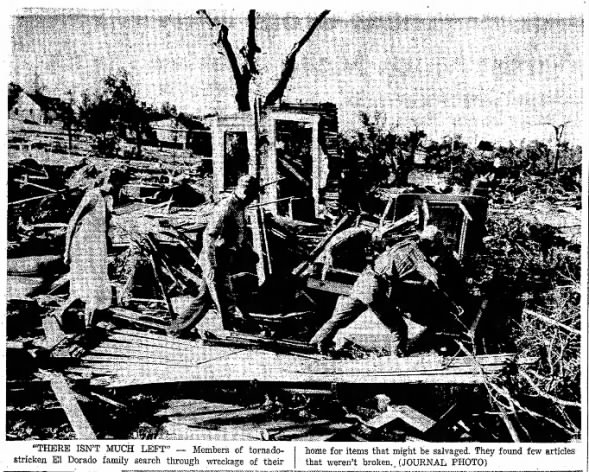 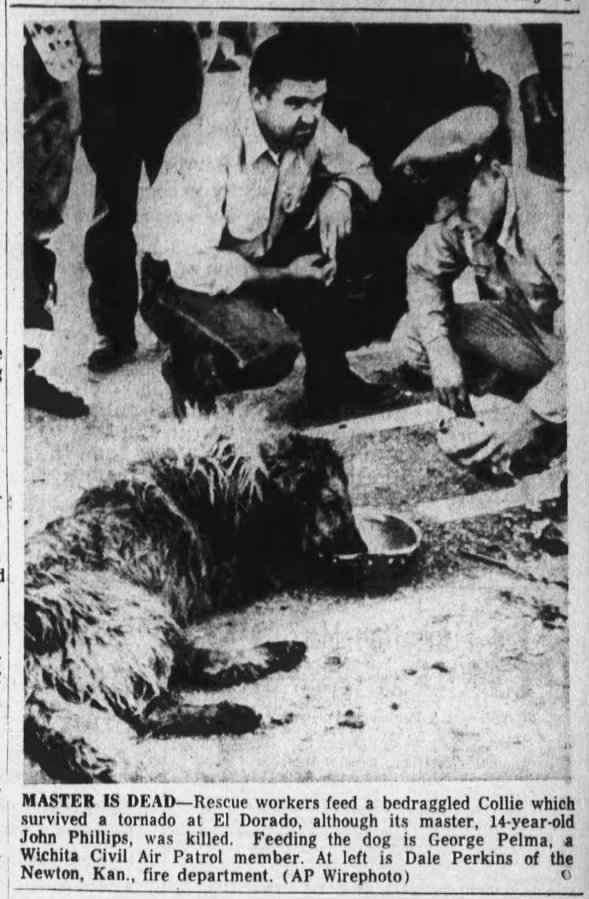 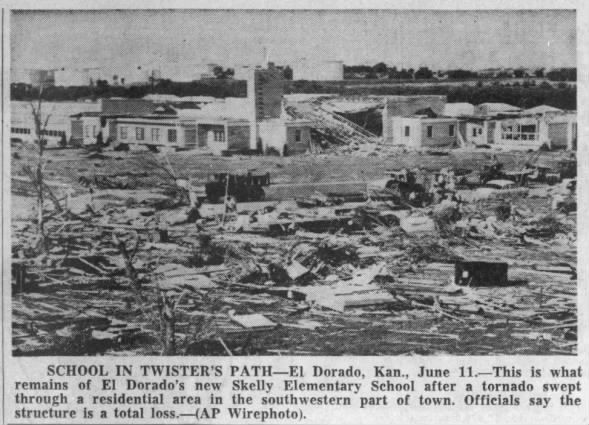 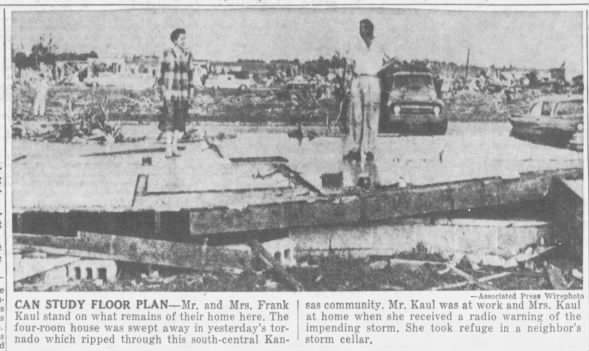 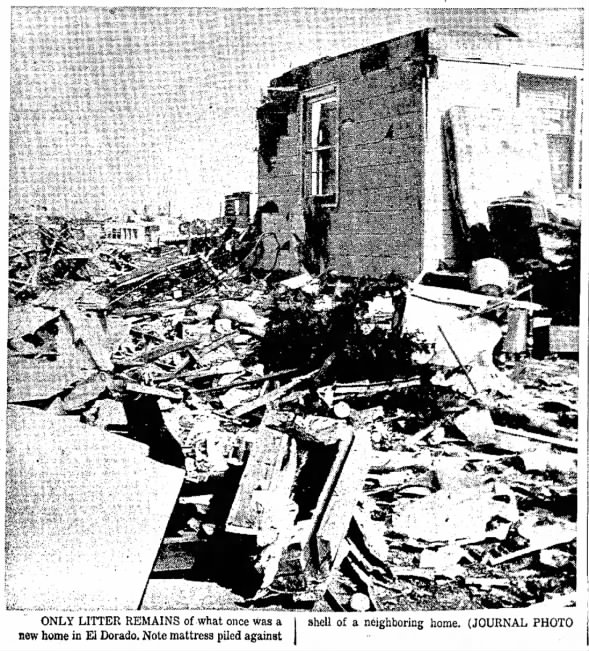 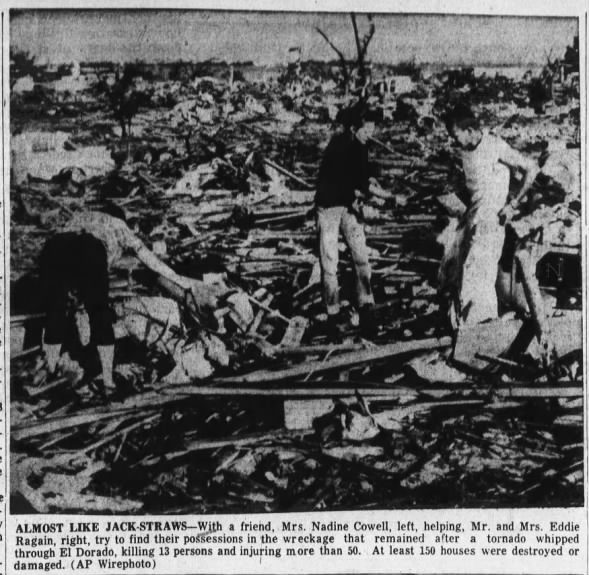 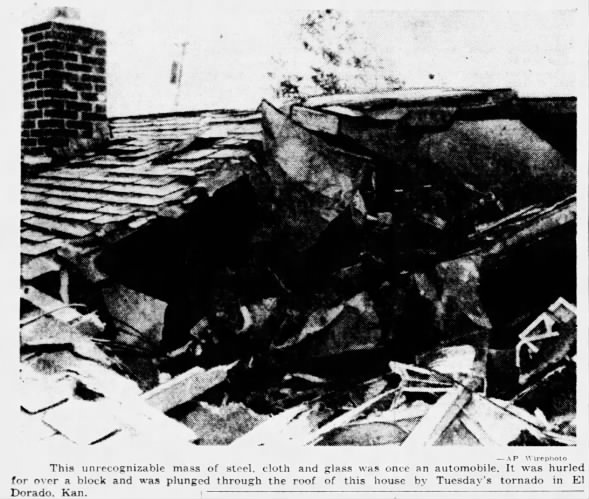 We gathered information for this event from the SPC & NCDC Databases, the June 1958 Storm Data Publication and Thomas Grazulis in Significant Tornadoes and found the following differences:

The splinters in the boy were amazing, surprised there was no video of this back then. I know it was 1958 but people had 8MM then.

It would be great to find video! This is just one of so many summaries we want to go in and do a complete overhaul and tell more of the stories with it.