On July 21, 2003, a derecho moved across portions of Ohio, Pennsylvania, into New York and New England. Per the Storm Prediction Center, it spawned 20 tornadoes. The focus of this summary is on the strongest tornado of the outbreak. It was given an F3 rating and hit the town of Ellisburg, PA. Check out our summary on what is arguably the most notable twister of this outbreak, which hit the Kinzua Bridge in McKean County.

This tornado formed in Potter County around 4:00 PM, about two miles southwest of the town of Ellisburg. It moved northeast and slammed into the Smoker Farm, where the farmhouse was completely destroyed. The house was taken off its foundation, leaving an exposed basement with the debris blown downwind. A dairy barn, heifer barn, equipment shed, and a Harvestore silo were also destroyed. Kevin Smoker was in the barn with the cows when he saw the twister slam into the house. His two kids were inside. His daughter got into the bathtub right as the tornado hit and told her brother to go into the basement. The bathtub then fell into the basement. The girl was not hurt. However, Kevin’s son suffered lacerations all over his body and was hospitalized.

At the Smoker Farm, 12 cattle and a dog were killed. The family car was thrown 600 yards into a field. A tractor was thrown up into a tree. A second home was struck on Smoker Road, near the farm. It was heavily damaged and left uninhabitable. A large part of the roof was torn off this house, and most of its windows were blown out. The tornado moved northeast and produced mainly tree and minor structural damage before lifting just east of Ellisburg. Hundreds of trees were downed by the tornado.

This was the first F3 tornado in Pennsylvania, since the Lake Carey tornado on June 2, 1998. It was also the first and only F3 tornado as of the time of writing to affect Potter County. The NWS stated that most of the damage was in the F2 range but the damage to the Smoker Farm was “low-end F3” with winds estimated at 160 mph. 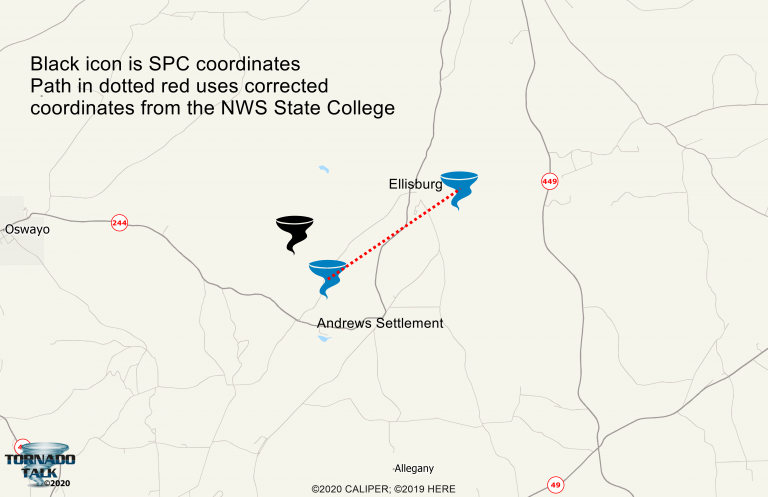 We gathered information for this event from the SPC/NCDC Databases, and the NWS State College Tornado Database