During the early morning of November 6, 2005, a devastating tornado traveled just over 41 miles from near Smith Mills, KY through southern Evansville, IN northeast to near Gentryville, IN. The tornado crossed the Ohio River three times. 25 people lost their lives along the path. It was the deadliest tornado to hit Indiana since 1974.

The tornado developed in NW Henderson County, KY.  It raced to the east-northeast moving across the Ohio River bottomland. An aerial survey showed a “well-defined swath of snapped and uprooted trees.” A farm house northeast of Smith Mills was destroyed. A pickup truck at the house was thrown into a field.

Per the NWS, the first time the tornado crossed the Ohio River was “into a peninsular section of Vanderburgh County, Indiana.” In this area, a two-story house built in 1875 had major roof damage. The survey noted that tree branches were embedded into the house. A farm equipment shed was demolished and another was damaged. “A 10,000-pound truck was flipped over.” The tornado crossed the Ohio River back into Henderson County, KY into another flood plain. It crossed a third time over the river less than a mile west of the U.S. Highway 41 twin bridges. There was extensive tree damage on both sides of the river.

The tornado hit Ellis Park, a horse racing facility. Damage occurred to the grandstands and housing facilities for jockeys. There were a few race horses that were killed. After striking the park, the tornado moved back into Vanderburgh County, IN.

The NWS summary notes that the tornado was still racing to the east-northeast at this point. It was clocked at 60 mph. A large mobile home park near Interstate 164 on the south side of Evansville was hit. 20 people were killed here. There were 350 mobile homes at the park, 100 were destroyed and 125 damaged. It was a devastating scene. Several bodies were carried almost 200 yards and many were found near a nearby retention pond. Per the NWS Summary, “The coroner reported that most of the victims were probably killed instantly, many by spine and skull fractures. Several bodies were carried almost two hundred yards. Several of the fatally injured persons were found in a nearby retention pond that was drained to find victims.”

There was an 8-year-old who was found alive in a ditch.  He had been trapped under debris for around 12 hours. 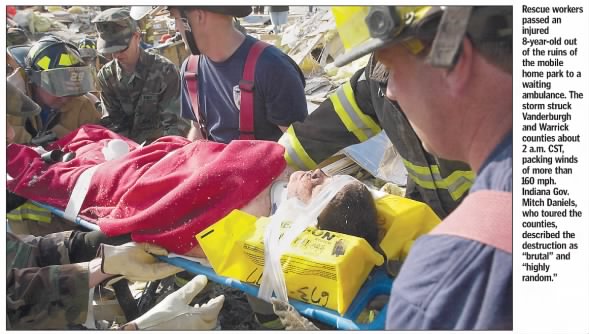 One person, who was thrown 150 feet, died of complications from tornado injuries on December 17. The tornado moved into Warrick County at the Angel Mounds State Historic Site, just south of Interstate 164.

The NWS states that peak intensity was reach in Warrick County. Winds of approximately 200 mph occurred along Highway 261 and Lincoln Road, in an industrial park near Paradise, and in DeGonia Springs. Just south of Boonville, a teenage girl was killed in a vehicle. In DeGonia Springs, three people, including a woman 8 months pregnant died in a mobile home.

The tornado crossed into Spencer County from Warrick County just before dissipating. Some tin and insulation was found in a field at the end of the tornado track. The tornado was estimated to have weakened to F-0 strength shortly before it entered Spencer County.

There were 230+ injuries.  Per the NWS summary, 20 were critical and 63 resulted in hospital admissions.  The tornado lasted 45 minutes.  It began at 139am CST and ended 224am CST.  The picture below is the only known photo of the tornado.  It was taken from the webcam at Deaconess Hospital. Image via NWS Paducah.

Per the NWS Paducah summary, at least 500 homes/buildings were completely destroyed or severely damaged.  Much of the damage was upper F2 or lower F3 intensity. 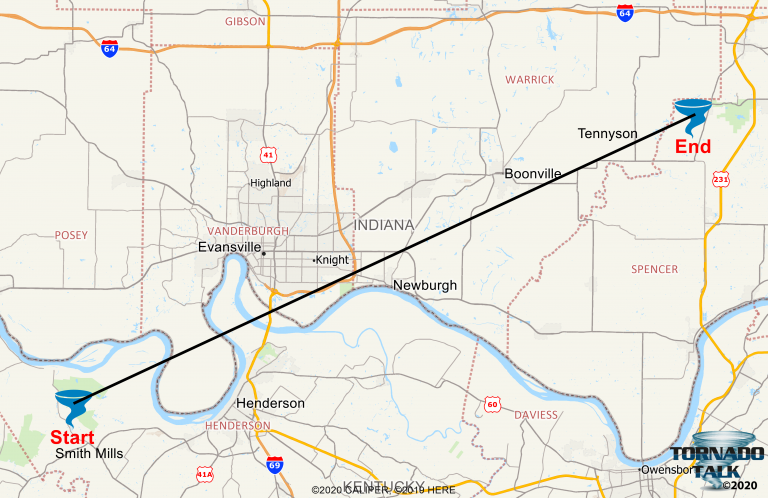 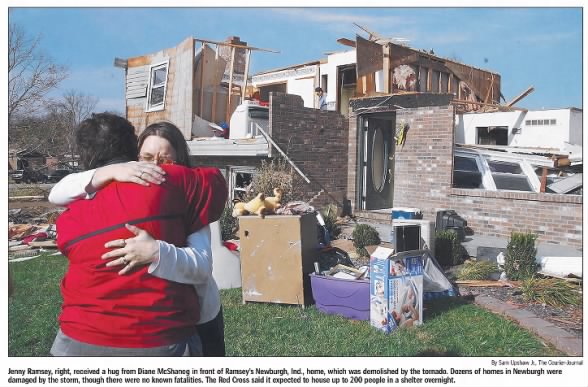 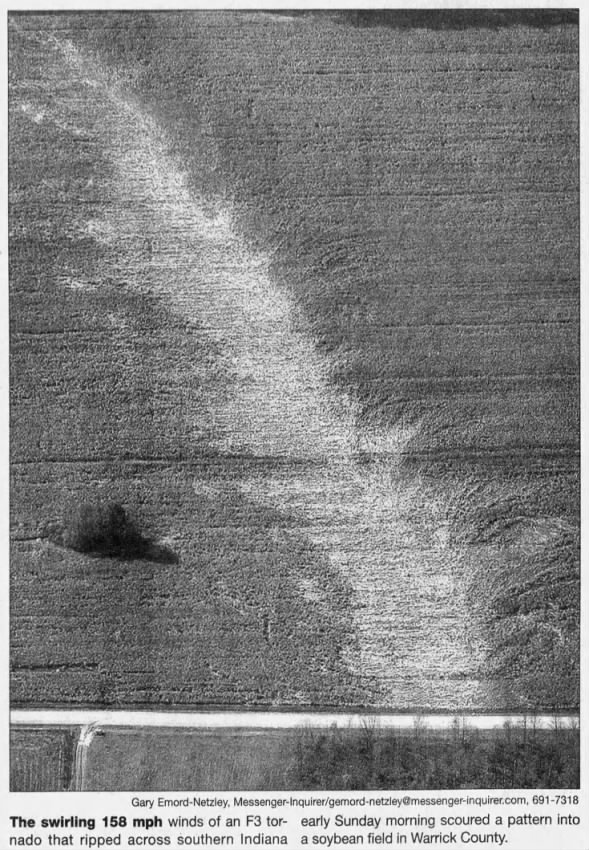 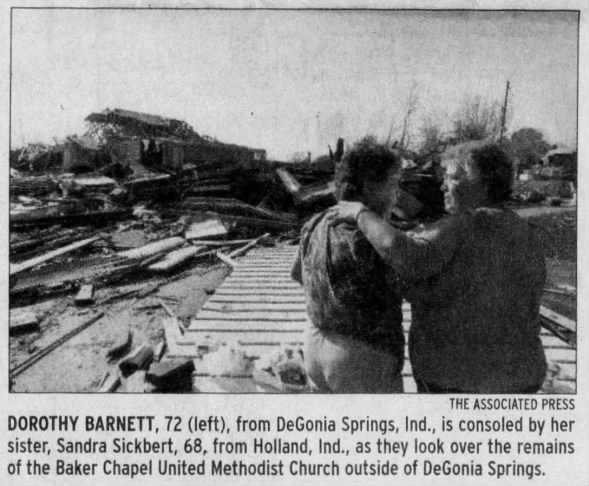 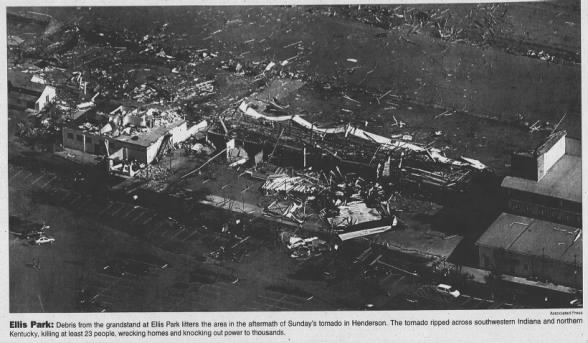 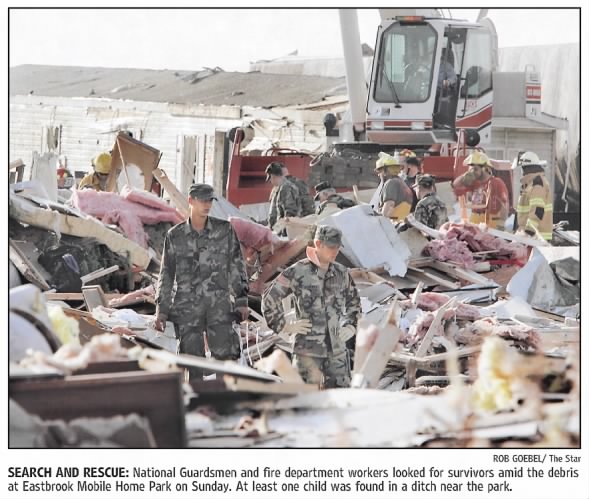 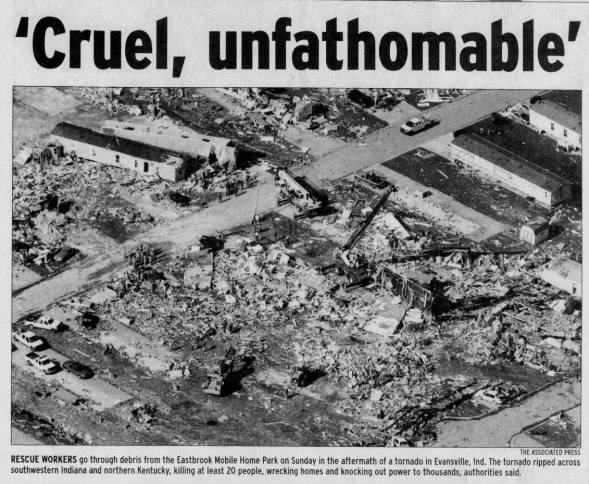 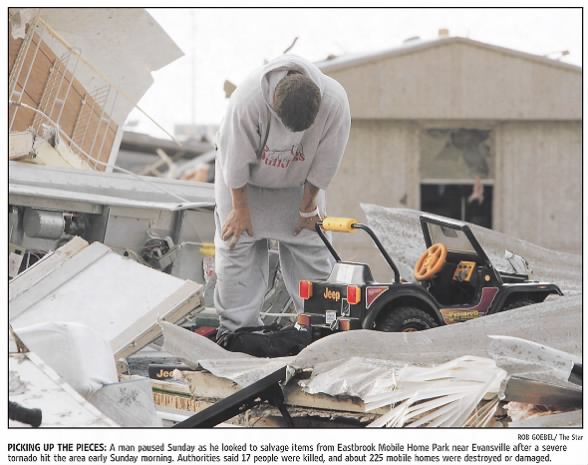 We gathered information for this event from the SPC & NCDC Databases, the November 2005 Storm Data Publication and a NWS Paducah summary of the event and found the following differences:

NWS Paducah Summary of the Event