Video capture of the Winter Garden tornado, looking north from Windermere, about 5 miles 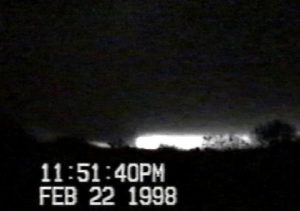 Video capture of the Winter Garden tornado, looking north from Windermere, about 5 miles away. As is often the case with tornadoes at night, it only became visible once it was backlit by lightning. Via NWS Melbourne.

It was deemed “The Night of the Tornadoes” – The most deadly tornado outbreak in Florida history occurred during the nighttime hours of February 22-23, 1998. A total of 7 tornadoes swept through the central parts of the state between 1055pm EST and 230am EST. The tornadoes were unusually strong. 3 of the 7 were rated F3. 42 people were killed and over 260 were injured. 3,000 structures were damaged, 700 destroyed. This summary will look at all 7 tornadoes in the outbreak.