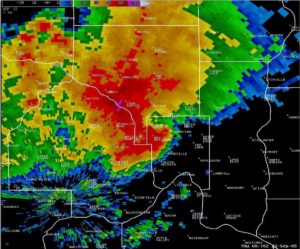 There were 4 tornadoes confirmed on September 21, 2005, all in the state of Minnesota. A series of supercells pushed through the east central part of the state producing not only the tornadoes but large hail, flashing flooding and widespread wind damage. This summary looks at the strongest tornado to occur, an F2 in Anoka County. Along with the tornado, the NWS Twin Cities stated “a rear flank downdraft was also responsible for causing damage in parts of Coon Rapids and Blaine.”