An F4 tornado with winds estimated near 210 mph, moved through Crosstown, Missouri on 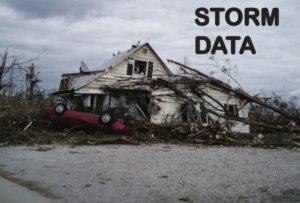