This is a repeating eventfebruary 7, 2020 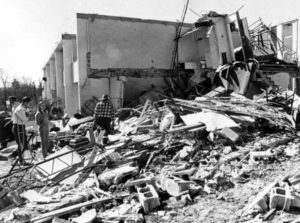 “Survivors of a tornado which wrecked the English Cove Apartments shown here and a motel across the street go through the rubble looking for items not destroyed by the twister.”

During the early AM of February 7, 1971, a waterspout south of Santa Rosa Island moved northeast becoming a tornado near Navy Cove. Half of the units in a 112-unit apartment complex were destroyed near Gulf Breeze. 112 people were injured, there were no fatalities.