Cover of the December 1997 Storm Data Publication with this caption: “A two-story home 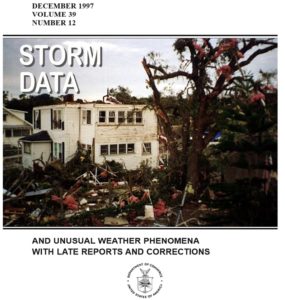 Cover of the December 1997 Storm Data Publication with this caption: “A two-story home in Haines City is damaged by an F2 (Fujita Scale: Wind speeds 113-157 mph) tornado on December 27, 1997. The tornado caused damage along a 5.8 mile path just east of Haines City, Florida. Notice the insulation can bee seen in the yard and in tree branches. (Photograph courtesy of Walk Zaleski, Warning Coordination Meterologist, National Weather Service, Ruskin, FL).”

Three tornadoes occurred on December 27, 1997 in the state of Florida. The strongest was given an F2 rating. It developed in the Lake Region Mobile Home Park along US Highway 27 and County Road 544 in Polk County. Several residents remarked that the tornado sounded like “a high-pitched whine”. Many mobile homes had major to severe damage.