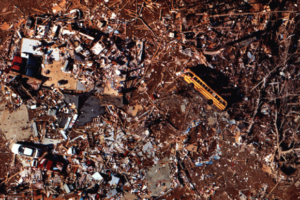 An aerial view of a Jackson-Madison County school bus that was tossed about 300 yards from its bus barn. (Photograph courtesy of Robert Cohen, The Commercial Appeal, Memphis, TN.

The tornado formed east of Bemis and tracked NE for 16 miles. It trekked through the southern part of Jackson. The Hollywood Shopping Center had severe damage. A funeral home near it was demolished except for interior rooms. 200+ homes were destroyed and 300 more had lesser damage. One of the hardest hit subdivisions was Orchard Hill.