A view of the tornado damage across a peninsula in western-central portions of Lake Martin. 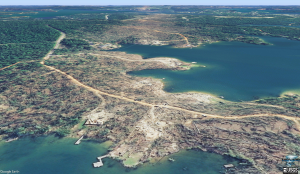 A view of the tornado damage across a peninsula in western-central portions of Lake Martin. The view is looking to the northeast. There were two fatalities in one of the destroyed homes at bottom. Image created using USGS/Atlantic Group aerial imagery and Google Earth. Aerial imagery taken May 1, 2011.

The Lake Martin tornado was the southeasternmost violent of the Super Outbreak and the last significant tornado to strike Alabama on April 27. In addition, it spent almost four total miles directly on Lake Martin – the largest cumulative distance over water of any violent tornado in the 2011 Super Outbreak. Tragically, this tornado was also a killer and left a striking scar across a beautiful part of east-central Alabama. Read this premium summary by becoming a member here!