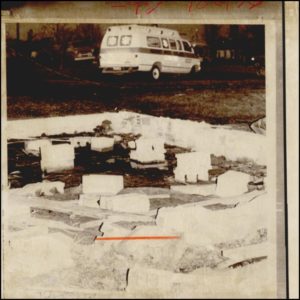 [Photograph 2012.201.B1215.0773] hosted by The Gateway to Oklahoma History Photograph used for a story in the Oklahoma Times newspaper. Caption: “A battered foundation is all that remains of the John Trout home in Spiro after a tornado ripped it apart Friday.”

Per the SPC database, 17 tornadoes occurred on March 26, 1976. Two were rated F4 (1 in OK, 1 in MS). At 328pm CT, a tornado that would be rated officially F5 traveled 11.9 miles through parts of LeFlore County, OK. There were 64 injuries and 2 fatalities reported. Tremendous damage occurred in and around the town of Spiro.