April 1, 2006, aerial imagery taken by the Commonwealth of Virginia one and a 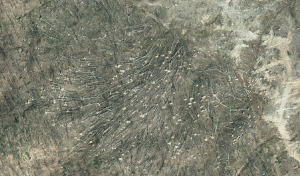 April 1, 2006, aerial imagery taken by the Commonwealth of Virginia one and a half years later. It was recovered from the USGS archives and shows the partially logged stationary vortex mark.

38 tornadoes tore across parts of Virginia on September 17, 2004 – the largest outbreak in state history. This was the result of Hurricane Ivan. While officially an F2, the Stanardsville tornado was likely the strongest and widest not just that day but ever in its immediate region. It also traversed mountains over 2,000 feet in elevation. Read this premium summary by becoming a member here!