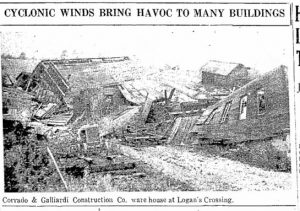 A destroyed warehouse in Connellsville after an estimated F3 tornado slashed through the area.

On the afternoon of July 28, 1936, two tornadoes hit Washington and Fayette Counties in Southwestern Pennsylvania. The twin tornadoes caused over $1,000,000 in damage. Two people were killed and at least 23 others were injured, in the rampage. We estimate these tornadoes reached F3 intensity at their peak.