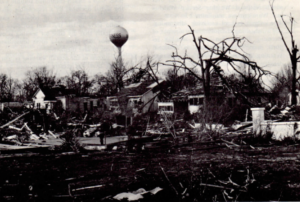 The Mississippi Delta Tornado Outbreak occurred February 21-22, 1971. There was a total of 19 tornadoes across 9 states. 123 people were killed with most of those occurring on the 21st. Nearly 1600 injuries were reported. Three significant tornadoes occurred on the 21st. Two were given an F4 rating and 1 was rated F5.