This was a significant event for many reasons.  First of all, there were devastating impacts to the city of Fargo.  A newer section in the NW part of the city was hit.  All property in an area 5 city blocks wide and 20 blocks long was destroyed.  1300+homes were damaged/destroyed, some were leveled and swept away.  There were 10 fatalities.  Per Thomas Grazulis in Significant Tornadoes, six children were killed in one family.  There were over 100 injuries.  Debris from the tornado was found north of Detroit Lakes (near Rochert, MN).  That is approx. 54 miles from Fargo.

This event was also significant meteorologically.  Ted Fujita did an in depth study on what occurred.  Per Grazulis, “The Fargo report was a landmark effort in both detailed mapping and in efforts to understand the tornado life cycle.”  In a 60th anniversary summary of this event, the NWS Fargo noted that Fujita would coin the terms wall cloud, tail cloud and collar cloud after analyzing 200+ photos from the Fargo tornado.

The Fargo F5 is listed in the SPC Database with a straight line path length of 52.4 miles.  The Climatological Data National Summary from June 1957 had a straight path length of 30 miles.  After Fujita’s work with this event, he determined this was actually a family of 5 tornadoes.  The F5 was the third.  Grazulis lists the path length of the Fargo tornado as 9 miles.

The NWS Fargo in their summary denote this 9 mile path and the fact that this was part of a family of tornadoes.  They go on to mention that the tornado was up to 700 feet wide.  The supercell produced tornadoes for more than 4 hours.  There was no conventional radar at this time.  The NWS states though that “an Air Defense Command (ADC) military radar site 205 miles south-southeast of Fargo measured the top of the thunderstorm between 65,000-75,000 feet.”

For the 50th anniversary of the tornado, the NWS Fargo gathered personal accounts and comments.  Here is an account from the warning meteorologist that night.  All accounts can be found here.

The following is paraphrased from interview with warning meteorologist the night of the Fargo F5:

I was working along on a swing shift in my 1st year in the Weather Bureau.  There were plenty of thunderstorms over the previous weeks, which likely added to moisture through the area.  The evening had the feel of thunderstorms, and I was “almost sure” there would be thunderstorms that evening.  I wrote up a severe thunderstorms statement templates once getting on shift around 4-5pm anticipating severe weather (this is great considering limited data at best for the era). We had teletype circuits connected to radio and TV stations, so they could pick up a receiver and talk directly to them.  Also had direct line to Kansas City to transmit severe weather warnings.  Air defense radar near Finley, they were not cooperative.  They would contact Fargo Wx. Bureau w/ radar reports at times, none that night.  Had some difax maps, plot 850,700,500 twice daily, BIS and STC RAOBS. Did sfc map generally every 3 hours (at least every 6 hours).

There was a line of storms approaching from west, eventually noticed what he thought was a TOR, called tower and confirmed it was a TOR near Wheatland/Mapleton and it did not last very long.  This was about 45 min before Fargo tornado. It was a small CB attached to the SW of the line. He prepared/sent the statement for the tornado, “we only had our eyeballs” and that was about all, no radar, satellite etc. “They really in a sense didn’t need anymore warning”, as you could see it coming in from the west. Called his wife in S. Moorhead and told her to get in basement.

As line approached, storm was blue/green with mesocyclone rotating rapidly and very evident above collar cloud after initial touchdown from separate storm?  Telephone began ringing off the hook.  PA showed up, Vern Hendrickson to assist with Conelrad (Civil Defense Warning System/ WDAY was primary). RAWARK to KC telling them about tornado.

Talking to Radio/TV stations live at this point about approaching tornado, cloud moving into W. Fargo , with cloud base between 2500-3000ft “low for a tornado” (low LCL heights!) Tornado dropped out of cloud, beautiful cone shaped with sharp point on ground. Point became less sharp and larger as it went through Golden Ridge area and widened to about ¾ mi wide.  Lost all communications and went outside to observe tornado. Sides of houses were seen flung around the tornado, was about 3/4mi from tornado, east of Moorhead roped out.  Tornado was initially due west of airport, then dropped south and turned east, then northeast into MN. (this lines up well w/ Fujita track)

Many people were seen evacuating the city, and it could have been much worse had tornado tracked along crowded roads from people evacuating.

Tail cloud was observed extending 1 mile from parent wall cloud, precip occurred after tornado passed, none before and not much to south of fargo, even south fargo .  Back edge of squall line, extended quite a ways north of Fargo.

The maps below been extracted from “A Detailed Analysis of the Fargo Tornadoes” by Ted Fujita.  This is his official document about this event.  Full report found here.

Ted Fujita determined after extensive investigation that there were 5 separate tornadoes.  He labels them as follows:

Per Fujita’s report, the Fargo tornado (the 3rd in the family) developed in the rural area 2.5 miles west of the Fargo city limits.  The damage path was 9 miles.

From A Detailed Analysis of the Fargo Tornadoes of June 20, 1957 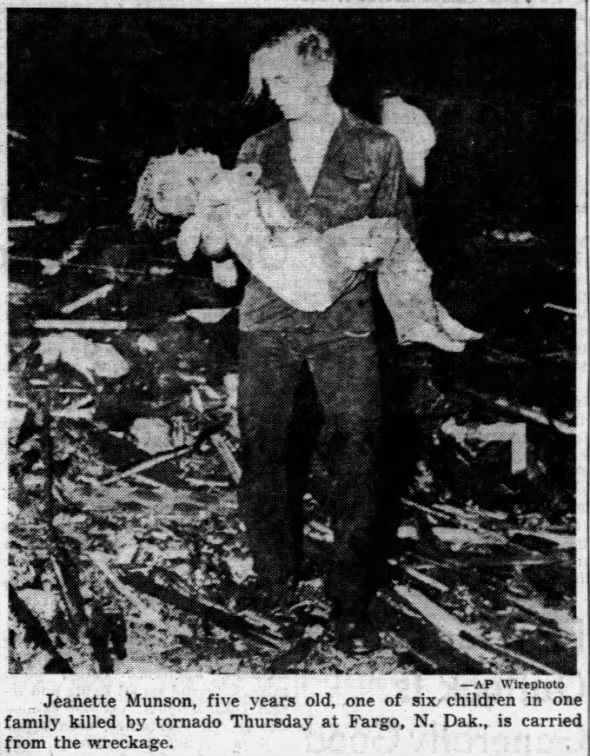 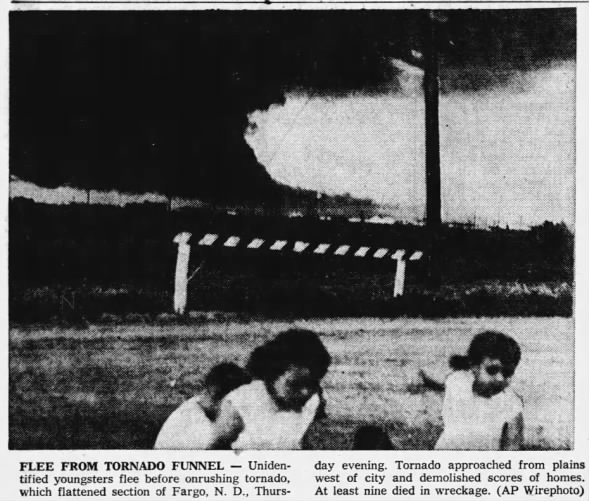 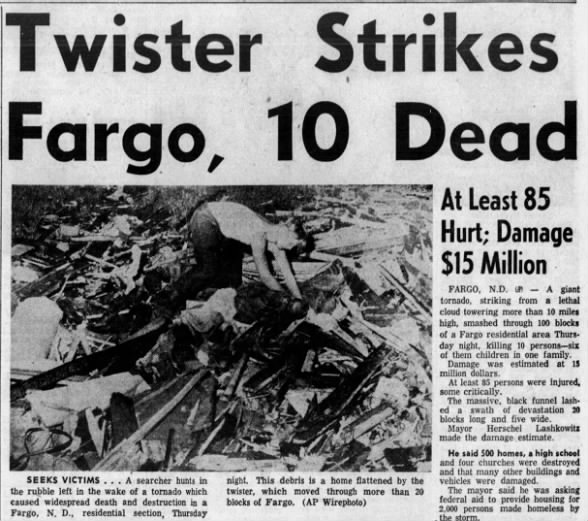 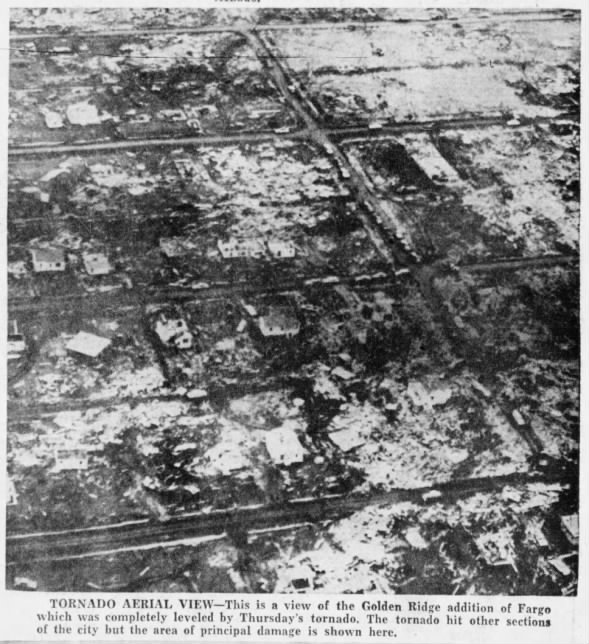 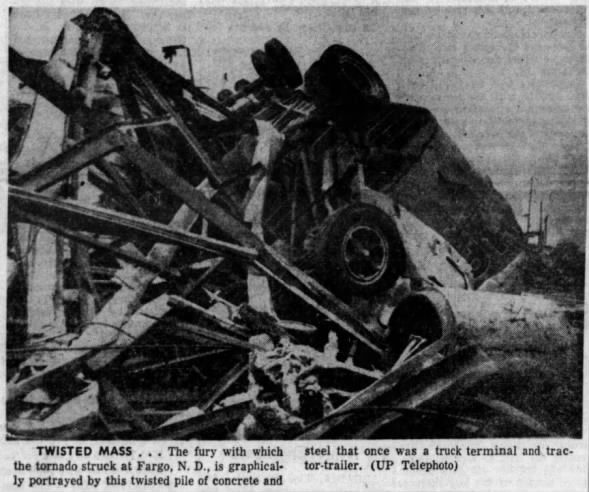 We gathered information for this event from the SPC & NCDC Databases, the June 1957 Climatological Data National Summary, a NWS Fargo summary of the event and Thomas Grazulis in Significant Tornadoes and found the following differences:

A Detailed Analysis of the Fargo Tornado of June 20, 1957 by Ted Fujita