On This Day: February 14

Tyler, TX F3 Tornado – February 14, 1908:This summary looks back at an estimated F3 tornado from February 14, 1908. It moved 5 miles through Smith County, TX, right through Tyler during the early morning. Read the full summary here! 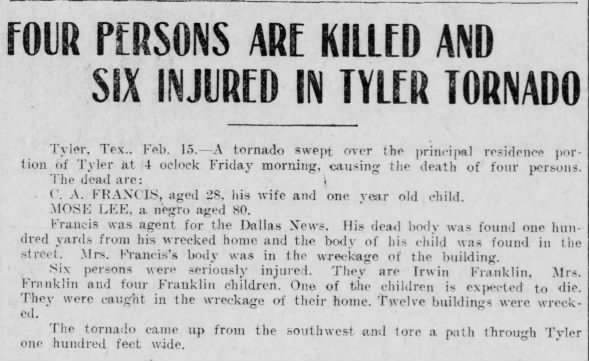 On February 14, 2017, an EF2 tornado tracked for 0.68 miles through Crabb, TX. The EF2 rating was based on a destroyed garage.  Several homes sustained minor damage. Source.

On this day in 1918, Frederick Douglass, African American abolitionist, orator, newspaper publisher, and author who is famous for his first autobiography, Narrative of the Life of Frederick Douglass, an American Slave, Written by Himself. He became the first Black U.S. marshal and was the most photographed American man of the 19th century, was born in Talbot county, Maryland. He died in 1895. Source:  Britannica.

On this day in 1932, The George Burns and Gracie Allen Show debuts on CBS radio, airing there until 1937, moving to NBC until 1949, and returning to CBS in 1949, before moving to television! Get more daily history at onthisday.com!

On this day in 1989, English keyboardist Vincent Crane died from a deliberate overdose of Anadin tablets aged 45. He was a member of The Crazy world of Arthur Brown, who had the 1968 UK No.1 and US No.12 single ‘Fire’ and Atomic Rooster (with drummer Carl Palmer later of Emerson, Lake & Palmer). Atomic Rooster enjoyed success in 1971 with two hit singles, ‘Tomorrow Night’ and ‘Devil’s Answer’. Get into the groove with more music trivia at thisdayinmusic.com!