On This Day: February 19

Angola, LA F2 Tornado – February 19, 1954: “Angola” is the location of the Louisiana State Penitentiary. It is named “Angola” after the former plantation that occupied this territory. This was a quick-hitting tornado at Angola. A dormitory was unroofed and several guard towers were damaged. A trustee guard was killed as his wooden guard post was destroyed. Read the full summary here!

February 19, 1888: Grazulis documents a possible F4 tornado in Jefferson County, IL. It devastated the southeastern part of Mt. Vernon. Approximately 300 homes and 50 businesses were demolished. 24 people were killed and 80 injured. “Overturned wood stoves ignited many fires in the wreckage. Five businesses on the town square burned to the ground, as did a half dozen homes to the northeast of the square.” 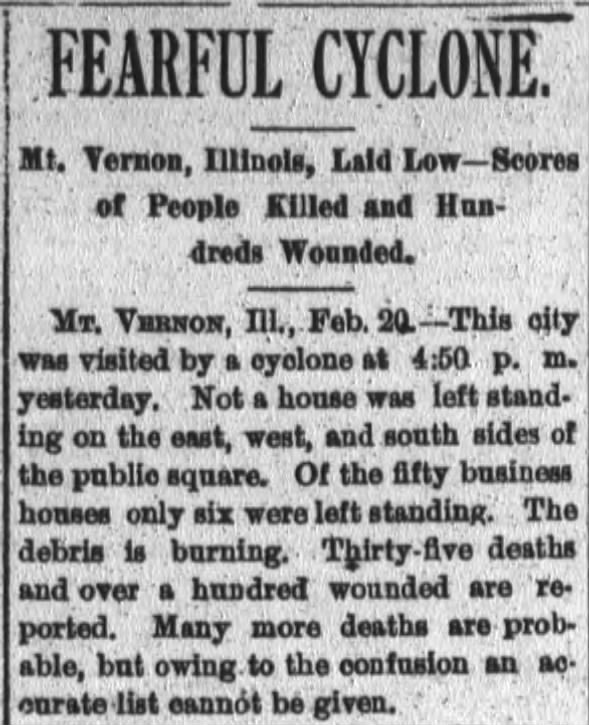 The Presidents Day Blizzard blasted the Mid Atlantic on February 18-19, 1979. Up to 25″ of snow snarled the area. Farmers from across the Midwest had driven their tractors to the National Mall to protest the agricultural policy of the Carter administration just before the storm hit. In the aftermath, some of the farmers attached blades to their tractors to help clear roads and assist stranded motorists.  Source.

On this day in 1878, Thomas Edison is granted a patent for his gramophone (phonograph). Check out more historical events at onthisday.com!

On this day in 1473, Nicolaus Copernicus, Polish astronomer who proposed that the planets have the Sun as the fixed point to which their motions are to be referred, was born in Toruń, Royal Prussia, Poland. He died in 1543. Source:  Britannica.

On this day in 1982, Ozzy Osbourne was arrested in San Antonio, Texas for urinating on the cenotaph at the Alamo, which honors the Alamo defenders. Osbourne was wearing a dress at the time of his arrest, (due to his wife Sharon hiding all his clothes so he couldn’t go outside). Osbourne was banned from ever playing in San Antonio, Texas again, (a ban which was lifted in 1992). When later interviewed, Ozzy said his next goal was to urinate on the White House lawn.  Get into the groove with more music trivia at thisdayinmusic.com!