This tornado hit Fort Stewart, GA, during the afternoon of February 3, 2016.  Right off the bat, I saw an error in the record.  The SPC database has this tornado listed as EF0.  The Storm Data Publication in the stats area also has EF0, BUT in the narrative itself, it states this tornado was a high-end EF1.  The NWS Charleston summary also states this was an EF1.

The survey performed by the NWS Charleston, SC, found max winds to be between 105 and 110 mph.  The tornado developed near Gate 7 of the Fort Stewart complex.  It moved NE at 35 mph through the center of the base and dissipated near Highway 144.

The most significant damage was noted at the Taylors Creek Golf Course, then stretched ENE through a neighborhood to Diamond Elementary School.  Several large pine trees were uprooted or snapped.  Approximately 6-10 homes were heavily damaged in the neighborhood due to the large trees falling on them.  Three cars were moved about 20 feet in the parking lot of the elementary school.  The school’s gym had roof damage.  Beyond the school, mostly tree and power line damage occurred.

In all, 42 homes had some degree of damage, and 150-200 vehicles sustained damage.  Eight unit facilities were damaged as well. 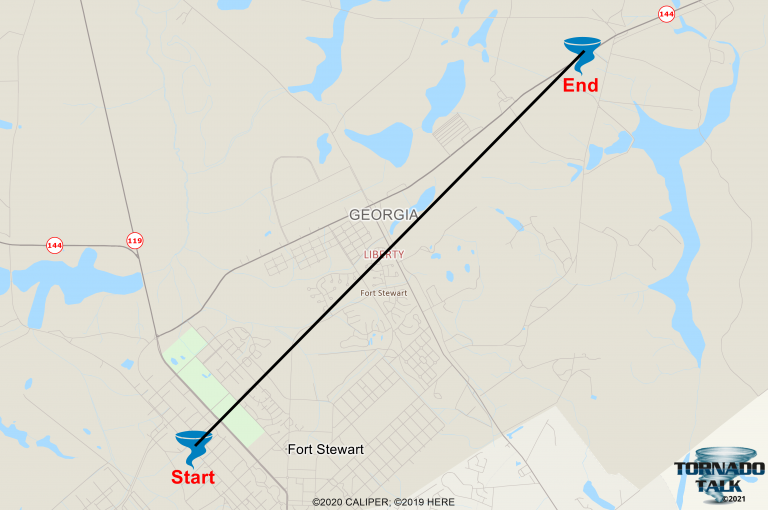 Radar and Damage Photos from the NWS Charleston Summary

Check out this video of the tornado near Fort Stewart, GA. Look at those vortices!!! Vid: Francisco Martinez. pic.twitter.com/aUCkJ8C3LQ

We gathered information for this event from the SPC & NCDC Databases, the February 2016 Storm Data Publication and The NWS Charleston Summary and found the following differences: