This summary looks back at a devastating event in Gainesville, GA on April 6, 1936.

Information for this event gathered from the following resources:

The Gainesville tornadoes were a part of a larger outbreak that occurred April 5-6, 1936.  Per the Monthly Weather Review, tornadoes occurred at “17 different places scattered through 6 States, including Arkansas, Tennessee, Mississippi, Alabama, Georgia, and South Carolina.”

On April 5, an estimated F5 tornado struck Tupelo, MS.  Per Thomas Grazulis, “the tornado leveled over 200 homes, many of good construction on the west side of town.”  This tornado was one of the deadliest in the US.  The official death toll was set at 216.  Per Grazulis, there were still over 100 people in hospitals when that toll was reported.

This town was described by the Atlanta Constitution in April of 1936 as the “queen city of the North Georgia mountains”.  It was a hub for manufacturing and had a population of nearly 9,000. It was also home to Brenau College for Girls and The Riverside Military Academy for Boys.

George W. Mindling, Section Director for Georgia, published the below path map in the May 1936 US Weather Bureau Monthly Weather Review.  He indicates that 3 tornadoes struck the Gainesville area at practically the same time.

He states the first tornado hit at about 827am on the campus of Brenau College.  It moved east through New Holland and then out into the country.  No indication of where it ended.  He states, “the others came along 10 minutes later, two distinct funnel-shaped clouds appearing at once, as witnessed by a furniture dealer and by the major.”  The two tornadoes caused most of the damage in the heart of Gainesville.  Mindling continues, “One course of destruction led into the city from the southwest, just to the west of the Atlanta highway; the other came in from nearly west along the Dawsonville highway.  These two paths came together west of Grove Street, and an area four blocks in width was laid waste clear across the city, beyond which separate courses of destruction again appeared.  Where the tornadoes finally disappeared is uncertain, but Lavonia. GA., nearly 40 miles from Gainesville experienced a tornado about an hour later, and Anderson; SC., also had one on the same day.  These places are nearly on a direct line east-northeast from Gainesville.  However, reports of destruction at intervening points are lacking.’’

There are some discrepancies on the timing of everything.  Mindling states that clocks at the Western Union office were stopped at 837am.  There is a picture of the clock on the Citizens Bank Building located on public square that stopped at almost 828am.

Unfortunately, I don’t know the exact location of the Western Union office.  Most sources I looked at state the devastation occurred before 8:30am.  I did find a newspaper article on the 50th anniversary of the event in the Atlanta Constitution that stated a tornado time of 8:38am ET.

Another thing to note:  Mindling states this first tornado moved from Brenau College through New Holland.  I found information on damage in the New Holland area to the Pacolet Mill from the Digital Libary of Georgia project: The 1936 Gainesville Tornado: Disaster and Recovery.  They document that this damage occurred after Gainesville was hit.  Thomas Grazulis in Significant Tornadoes mentions the Pacolet Mill in the midst of the Gainesville damage.  The Digital Library states this area is east of Gainesville by about 2 miles.  New Holland is actually about 2 miles north of Gainesville and east of Brenau College.  I can’t be for sure, but perhaps the damage to the Pacolet Mill was from Tornado #1?  It could also have been damaged after the tornadoes separated away from downtown Gainesville?  In Mindling’s map, he has the path of the Dawnsonville Highway tornado moving close but south of New Holland.

The Digital Library states that the Pacolet Mill was heavily damaged. It was a major producer of textiles.  Noone was killed at the mill.  They saw the tornado coming and evacuated the upper floors.  They ran to the NE corner of the building which didn’t collapse when the tornado hit.

Let’s focus now on the devastation in Gainesville.  They have now been hit by two massive tornadoes that have merged right over the downtown area.  The damage was overwheming.  Per Grazulis, “the wreckage was astounding, with debris filling the streets up to 10 feet deep.”  He denotes that about 750 houses were destroyed and 254 were heavily damaged.

The largest death toll in a single building for any US tornado occurred at the Cooper Pants Factory (Grazulis, pg. 866).  This was a two-story factory on the corner of West Broad and Maple streets about two blocks southwest of public square.  Per the Digital Library of Georgia, “Many of the 125 factory workers, most of whom were young women and children, scurried to the basement for protection when the tornado struck.  Tragically, the weakened building collapsed and burst into flames, trapping many and ultimately killing at least sixty workers.”

At Newnan’s department store, many people, especially high school students, took shelter.  The building collapsed and about 20 people were killed.

Per Grazulis, “the wreckage was so deep and swept by fires that it was not possible to determine how many people were killed in which buildings.  At the time that the 203 person death toll was listed, 40 person were still missing.”

Per the Digital Library of Georgia Project, The First United Methodist Church was home to the Red Cross Headquarters.  They provided an emergency clinic and also a morgue.

The citizens of Gainesville immediately began their recovery and rebuild.  President Franklin D. Roosevelt cut short is vacation to visit the town on his way back to Washington DC.  He met with local officials and spoke to a crowd assuring federal assistance.

Per the Digital Libary of Georgia Project, “Federal officials distributed $2,500,000 in immediate relief funds to cope with the Tupelo-Gainesville Tornado Outbreak, and the U.S. Senate passed a bill that provided $50,000,000 in rehabilitation loans for those in communities affected by the storms.  The Reconstruction Finance Corporation invested nearly $1,000,000 in Gainesville.  The Public Works Administration helped with projects for schools, water works, a jail, and (what was then known as) an “almshouse.”  The Works Progress Administration assisted in repairing sewers and sidewalks, street lighting, repaving, parks, and schools.  These federal resources, along with additional local resources and many generous donations, helped Gainesville to recover.”

In March of 1938, President Roosevelt returned to Gainesville to dedicate the new civic center.  He stated, “You were not content to clear away the debris which I, myself, saw as I passed through Gainesville a couple of days after the disaster. You were not content with rebuilding along the lines of the old community. You were not content with throwing yourselves on the help which could be given to you by your State and by the Federal Government. On the contrary, you determined in the process of rebuilding to eliminate old conditions of which you were not proud; to build a better city; to replace congested areas with parks; to move human beings from slums to suburbs. For this you, the citizens of Gainesville, deserve all possible praise.” 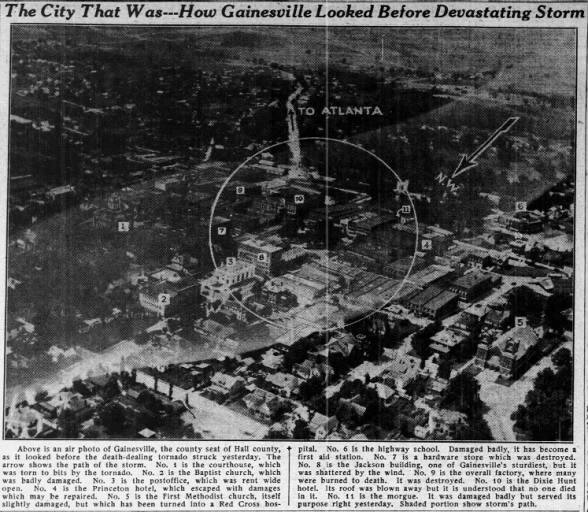 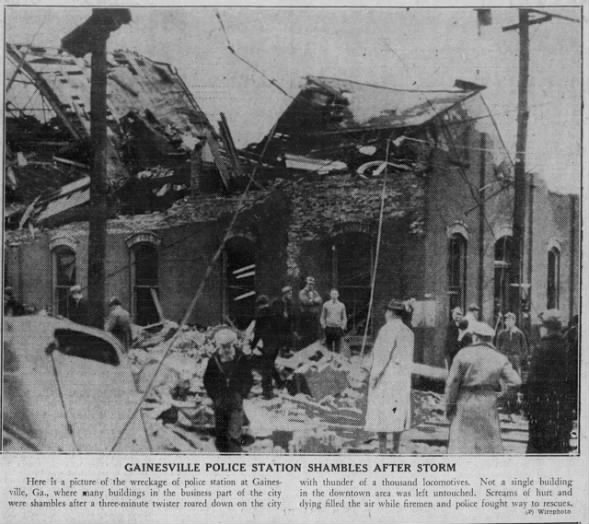 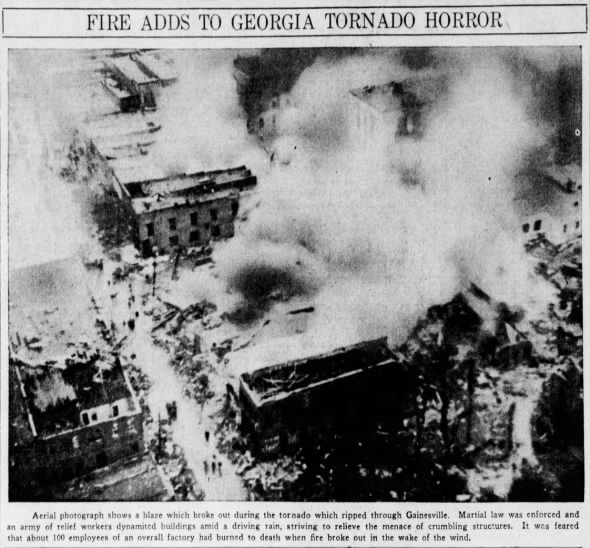 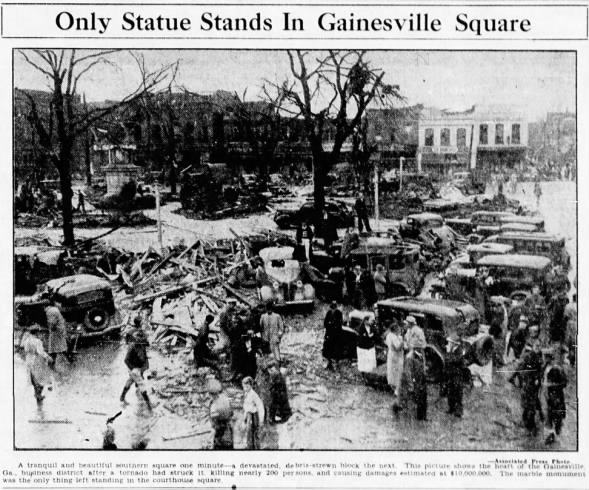 The 1936 Gainesville Tornado: Disaster and Recovery – Digital Library of Georgia