As with some past events, we had to put on our Sherlock Holmes hats with this one and do some sleuthing to figure out what exactly happened.  The SPC has one tornado listed on August 3, 1963, and this is it:  An F3 with a path length of 0.1 miles in Allegheny County, PA.  There are several discrepancies that expand across our different sources.

First of all, there are some uncertainties on the path.  What exactly was the length?  What locations should be included in the path?

The SPC has a length of 0.1 miles.  NCDC has a 0 path length. Thomas Grazulis in Significant Tornadoes has a 1-mile path. The Storm Data entry has no path length.  They mention the event occurred in the “Glassport-Carnegia-Clairton Area”. There is no Carnegia that we could find so we assume this is a typo and should be Carnegie.  The event description is “Twister & Thunderstorm”.  The only location mentioned in the narrative is Glassport. The distance between Carnegie and Glassport is approximately 11.5 miles. Glasston and Clairton are approximately 3 miles apart.  Grazulis states the tornado moved “SE at Glassport and Carnegie.”

In terms of the path width, we aren’t really sure.  SPC has a 10-yard width while NCDC has a 33-yard width.  Grazulis has a 300-yard width which seems more reasonable.  Storm Data lists no width.

With Storm Data listing this event as “Twister & Thunderstorm”, we are going to assume that we had a line or cluster of storms that went through here and there may have been a brief tornado touchdown(s).  It would make sense then why no length or width is listed in Storm Data.

What about the locations?  Carnegie is mentioned in Storm Data and Grazulis, yet that town is 11+ miles away from Glassport.  If the path should include Carnegie then the length should be much greater.  Perhaps there were severe thunderstorm winds that began there and headed Southeast toward Glassport and Clairton and in the midst of that, a tornado briefly developed. However, based on Storm Data and newspapers we know there was heavy damage to the Allegheny County Airport. The airport is 3 miles northwest of Glassport. We also know that there was significant damage to the U.S. Steel Works which is located just across the river from Glassport.

We also know of damage to a golf course near Buena Vista, located about 6 miles southeast of Glassport. At the Butler’s Golf Course there was extensive tree damage. Several buildings including the clubhouse were destroyed. Debris from these buildings was carried over a mile to the northeast and found in Buena Vista. The damage here indicated that a tornado was clearly responsible for the damage.

We found on a Google search a history of Glassport, Pennsylvania.  It is found here.  This was written in commemoration of our nation’s Bicentennial Celebration.  A letter from the Mayor dated November 9, 1976, states, “As the Mayor of Glassport, I want to express my sincere thanks to the Glassport Bicentennial Committee for this collection of historical facts and interesting information which has been their contrition in commemoration of our nations Bicenttial celebration.”  On that site, there is a link to “DISASTER-1963“.   We will have a section below that will list some of the damage reports from that document but one thing that stuck out was this statement, “Although it was never officially called a tornado, the violent storm had all its characteristics; funnel clouds, heavy rain, 90 miles an hour winds, buildings collapsed from the inside out and the storm skipped about hitting certain areas only.” So, the town seemed to think there was no tornado at all.

Newspaper searches showed all kinds of interesting things: reports of damage from Carnegie to Glassport to Clariton; winds clocked at 90mph; interviews with meteorologists. Some said there was a tornado – perhaps more than one. Some said there wasn’t.

And then a headline caught my eye from the Pittsburgh Post-Gazette from August 6, 1963, “Storm’s Wavy Line Puzzles Weather Men.”  Here is the article and graphic from that newspaper. 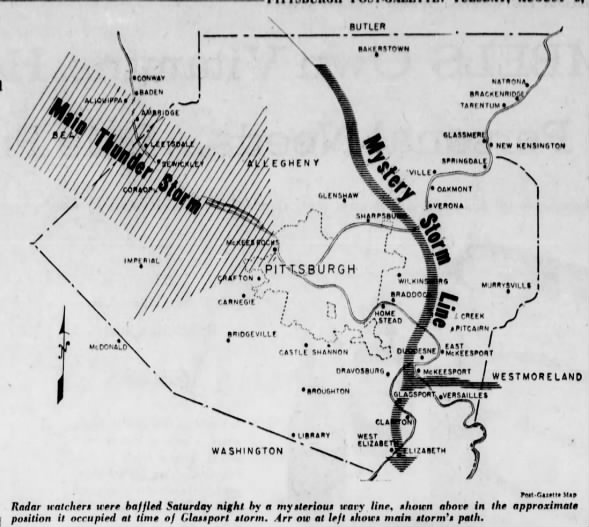 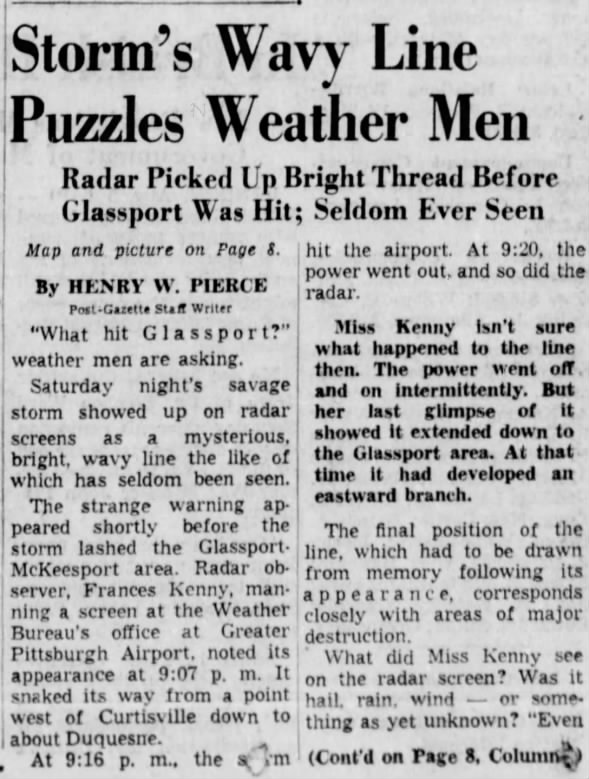 So, what was this mysterious wavy line?  When you read the article it is a bit confusing on what exactly that wavy line looked like.  Could it have been an outflow boundary?  We would love to get the opinion of other sleuths out there on what you think.

These sleuths believe we likely had several brief but intense tornadoes spawned from a squall line. However, since we can’t plot the paths of these individual touchdowns, our map below will reflect the idea of a single skipping tornado from Carnegie through Glassport to near Buena Vista, along an 18-mile path.

“The hands of the clock in the Glassport Police Station clung together on the number 10, stopped when the power failed moments before the disaster at 9:50 p.m., Saturday, August 3, 1963. In less than 2 minutes, winds estimated at up to 90 miles an hour, hit the town with all the fury of a tornado. Buildings were leveled to the ground, garages collapsed, porch furniture was hurled hundreds of feet into the air, metal awnings and roofs were whipped into grotesque forms, trees were uprooted and cars parked on the streets were flattened by the falling debris. Sheets of heavy rain washed out roads and power lines dangled from utility poles, creating a total black-out. There was no telephone service. A state of emergency was declared by Mayor Shaw.

Although it was never officially called a tornado, the violent storm had all its characteristics; funnel clouds, heavy rain, 90 mile an hour winds, buildings collapsed from the inside out and the storm skipped about hitting certain areas only.

Property damage ran into the millions. The full force of the storm hit the U.S. Glass House (never worked again), Copperweld, the High School Stadium, and the Steel City Lumber Company. Sheets of corrugated steel were ripped from Copperweld and tossed far up the hill. The roof of the Reliance Hose Co. was dumped in the entrance way of Copperweld Office Building which had been severely damaged by flying debris. Copperweld’s new office building (2 years old) built in the excess of $500,000.00 was “practically in shambles”. The heaviest losses were in the casting department, the rolling mill, ground rod department, laboratory and the engineering departments. Gratefully, the mill was closed for the annual summer vacation or the loss of lives may have been heavy.

Glassport Memorial Stadium damages were estimated at $100,000.00. Heavy steel floodlights were bent and twisted, one set of lights was flung over a car parked in front of the Roller Rink. The steel bleachers were crumpled like paper and huge holes were punched in the concrete wall. Broadway Roller Rink on Ohio Avenue had a group of approximately 25 teenagers inside when the wind virtually disintegrated the building. The roof was torn off and the walls collapsed, trapping the youngsters inside. By the grace of God, none of the youngsters were seriously injured but the building was never used again.

The Petrosky Hotel was seriously damaged. Mr. William Petrosky and Mr. Robert Martin’s dead bodies were found in the debris.”

The Storm Data entry lists the location as Glassport-Carnegie-Clariton Area.  There is no path length or width listed.  The description is “twister & thunderstorm”.

Here is the narrative:

Many buildings, houses and business places were partially, and some completely wrecked by the storm.  A roller skating rink collapsed, in which several persons were skating at the time.  A three-story, frame hotel in Glassport also collapsed killing two of the residents.  Several steele company buildings were destroyed or unroofed by the strong winds which were recorded at 89 mph.  Strong wind unroofed a number of homes and down many trees and utility lines.  An estimated $1,000,000 damage to two hangars and planes caused by the wind at the Allegheny County airport. 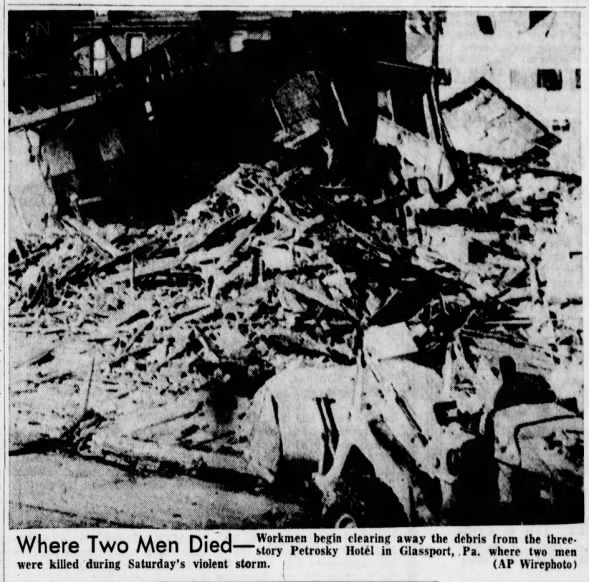 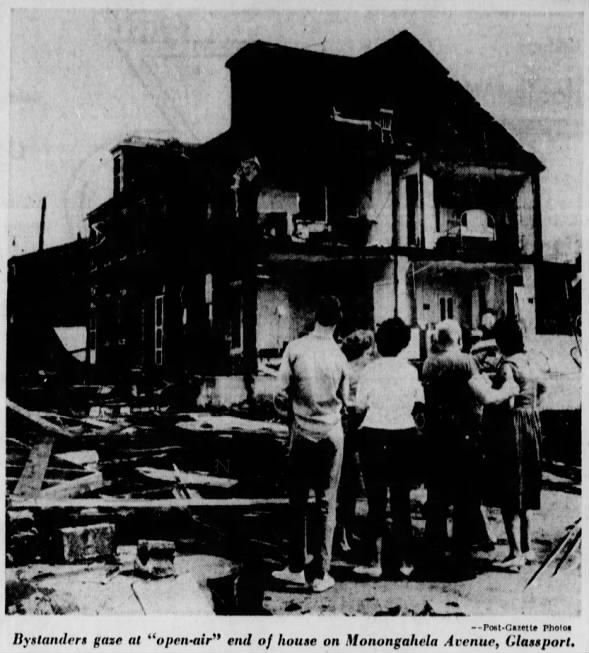 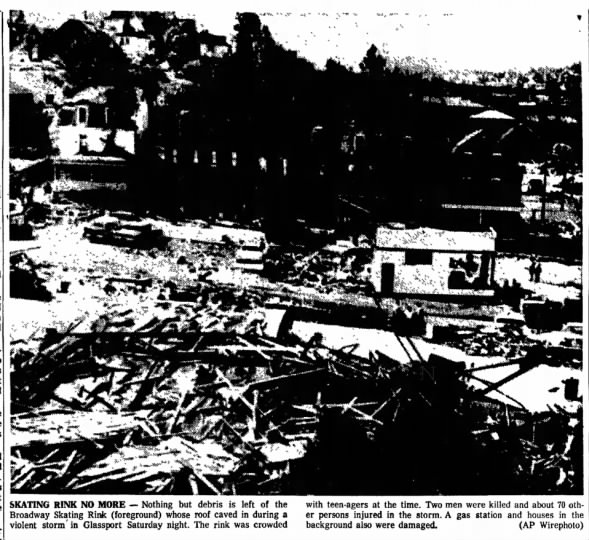 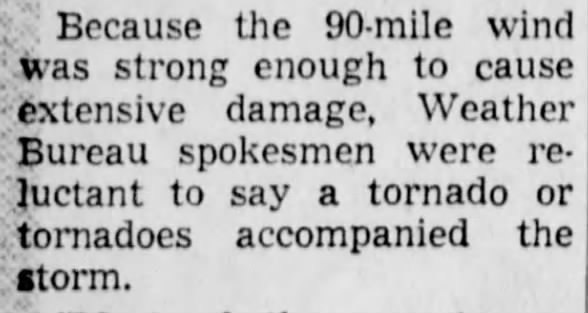 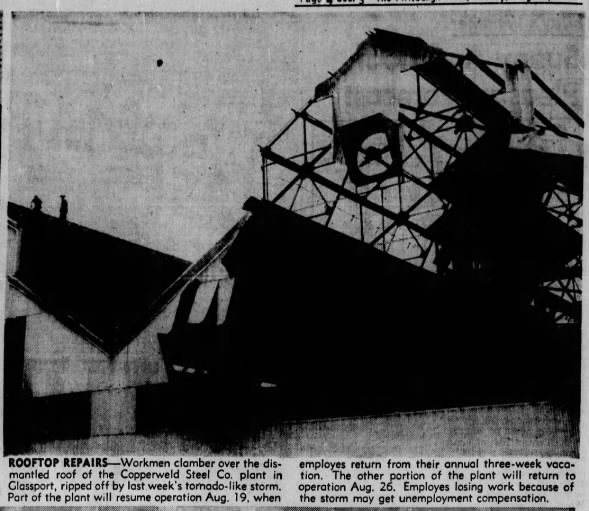 We gathered information for this event from the SPC & NCDC Databases, the August 1963 Storm Data Publication and Thomas Grazulis in Significant Tornadoes and found the following differences: