47 tornadoes were confirmed on April 7, 2006.  The deadliest crossed through parts of Davidson and Sumner Counties in TN.  It was given a rating of F3.  There were 128 injuries and 7 fatalities.

Details about this event gathered from the April 2006 Storm Data Publication and a Summary of the Event from the NWS Nashville.

The official path length entered in the SPC Database is 22.7 miles.  The following note though is added to the NWS Summary correcting the path length:  “NCDC incorrectly lists the time and path location of this historic tornado, which was corrected to begin along Dry Creek Road west of Goodlettsville based on radar data and satellite imagery from Google Earth. In addition, although radar data is not available for the end of this tornado due to a tornado-caused power failure at NWS Nashville, satellite imagery from Google Earth clearly indicates the tornado continued to blow down trees east of Bledsoe Creek State Park before lifting northwest of Emerald Valley Drive, approximately 2.5 miles southwest of Castalian Springs. Therefore, the path length was extended by 1 mile to 23.75 miles.”

Several homes were destroyed in Goodlettsville (Davidson County).  The Metro Baptist Church lost its roof and the front of the church was blown away.  35 pre-schoolers huddled in the back of the church under their chairs before the tornado hit.  None of the children were injured.  Official property tally in Davidson County:  25 homes destroyed, 13 homes or businesses with major damage and 31 with moderate damage.

The worst damage was in Sumner County.  700 homes and businesses were damaged or destroyed in the county.  80 homes were destroyed in the city of Hendersonville.  Volunteer State Community College in SW Gallatin was heavily damaged.  Several car dealerships across the road from the school were heavily damaged.  Per Storm Data, “Several people died inside their homes.  A NWS Storm Survey Team discovered that 1/2 million dollar brick homes were not built as well as one might have expected.  Cinder blocks were filled with concrete, and boards were nailed to the cinder block as the base for the foundation.  The strong winds caused some brick homes to move off the cinder blocks and collapse.  This was observed in the Woodhaven Subdivision in Gallatin.”

All 7 fatalities occurred in Gallatin. An 83-year-old woman died of a heart attack the day of the tornado and is considered an indirect death.

Tornado and Damage Photos via the NWS Nashville Summary 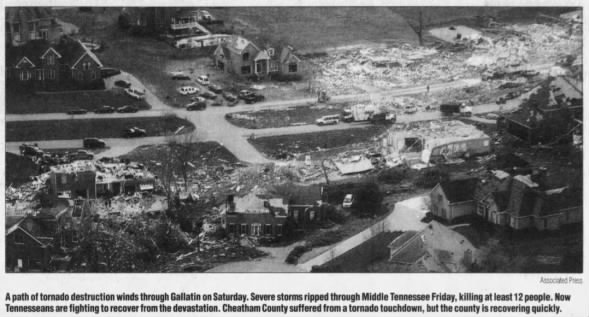 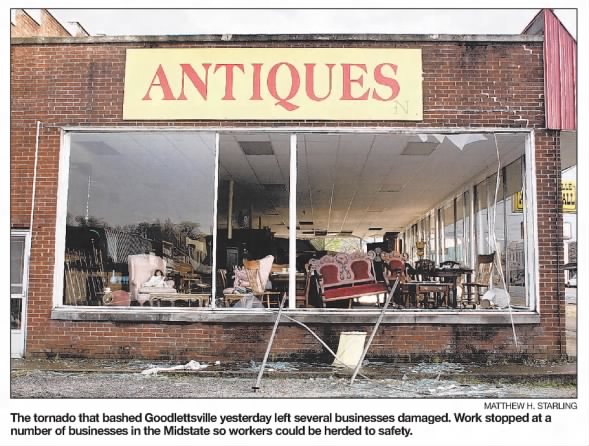 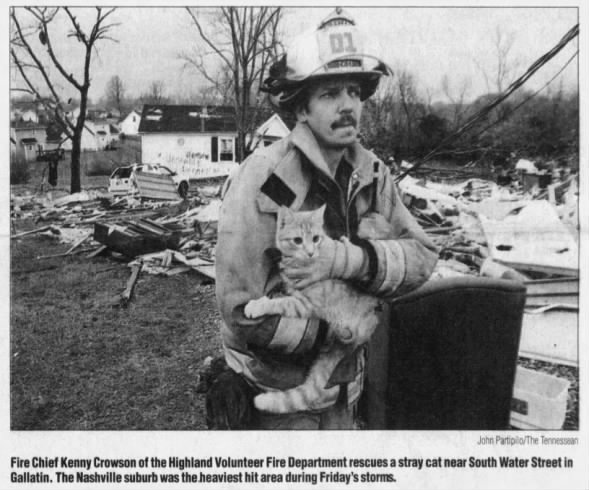